Rear View Mirror: Shooting in a quiet Richmond street, while a temple expansion feud rumbled on

The shooting victim managed to drive himself to hospital, while in other news, local residents continued to fight the expansion of a Buddhist temple
Apr 25, 2021 9:31 AM By: Alan Campbell 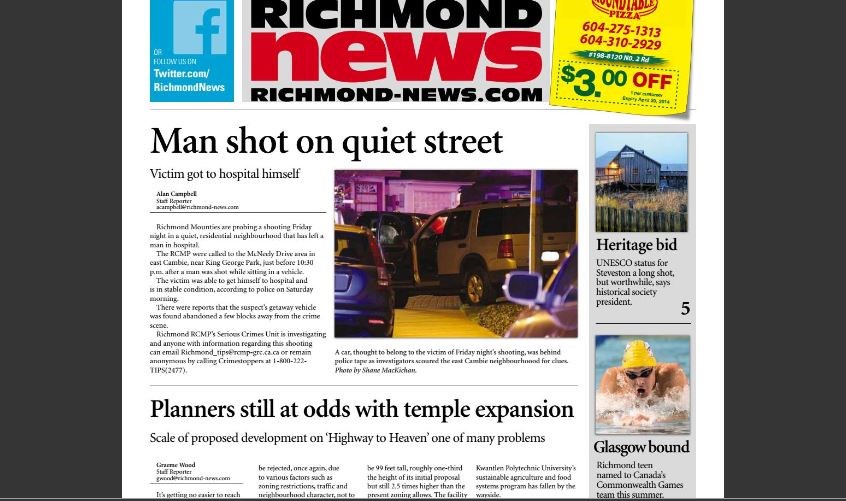 Over this weekend in 2014, the Richmond News was reporting on a shooting and a temple expansion disputeRichmond News screenshot

Richmond RCMP said at the time that victim was in his car at the time and managed to get himself to hospital and was in stable condition.

Meanwhile, on the same front page on April 23 seven years ago, a 10-year dispute between residents – including the now city councillor Carol Day - and the Lingyen Mountain Temple on No. 5 Road rumbled on.

According to our news report, City of Richmond planners “poked several holes through yet another proposal to vastly expand the temple.”

Temple executives wanted to build a 200,000 square foot facility next to its existing temple, with eight new buildings expanding into agricultural land to the east, known as the No. 5 Road backlands.

Local opponents, essentially, did not like the fact that the expansion height of the temple was to be 2.5 times higher than the zoning allowed, with the facility effectively doubling the number of residents to 100 and temporary guests to up to 200.

At the time, Day said the Buddhist temple executives' unwillingness to lower its height as well as its continued desire to build on agricultural land indicates how the proponents are out of touch with the neighbourhood.

Eventually, a compromise was reached between the temple, the residents and the city, with plans being approved in 2016, before ground was broken on the expansion in 2018.