Rear View Mirror: We are not alone...

The Richmond News discovered six years ago that there were more than 90 city namesakes around the world
Apr 18, 2021 9:30 AM By: Alan Campbell 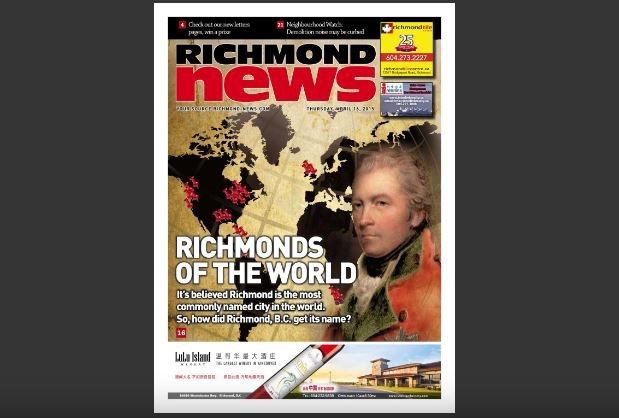 Did you know there are almost 100 cities or towns called “Richmond” around the world?

That’s what your own Richmond News discovered this weekend six years ago with its weekly front page feature.

The News reported how British author and toponymist Barclay Simpson had found out that the name Richmond is the most common place name in the world.

Simpson, himself a resident of the original Richmond, in Yorkshire, England, claimed to have tracked down more than 90 places with the same name as our great city.

And in a book published back in 2015, titled Richmonds of the World, Simpson highlighted 55 of them.

“I found there were six Richmonds in Canada, from Nova Scotia across to British Columbia. There are 45 in the United States alone and more across the world, including England, Germany, the Czech Republic, Tasmania and the Caribbean,” explained Simpson at the time.

He also explained why the name Richmond spread like wildfire back in the day.

“Several generations of the Duke of Richmond, in the 19th century, sailed around the world and kept naming places after themselves,” he said.

And in case you’re really curious, Simpson went on to tell how, in 1071, a French Count named Alain Le Roux (Alan the Red), of Brittany, was granted the land in Yorkshire - once controlled by Vikings and known as the districts of Gilling and Hang - by William the Conqueror, a Norman, after he had slaughtered its inhabitants.

Le Roux built a castle on a big hill overlooking the fast flowing Swale River. The word Richmond derives from the French words riche and monte, or “strong hill.”

And while our Richmond is as flat as a pancake, it does share a fast-flowing river with its namesake and founder in England.

The first Richmond in North America is found in the Commonwealth of Virginia. A city of about 215,000 residents, it is the biggest Richmond in the world, although Richmond, B.C. is likely set to change that in the upcoming decade.