Rear View Mirror: Six years ago it was cuddlin' time at the Richmond News

In 2015, the Richmond News looked into the world of cuddle parties in the city and staged its own mini version in its boardroom
Apr 11, 2021 9:30 AM By: Alan Campbell 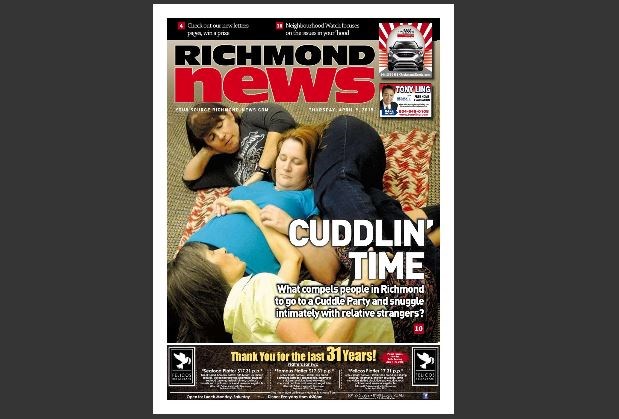 Six years ago this weekend, the Richmond News boardroom at the former office at No. 3 and Lansdowne roads was cleared out and turned into a space for a cuddle party.

Yes, you read that right, a cuddle party.

The party was very much, as the title suggests, about cuddling relative strangers.

Although not an official version of what was a regular event in a Richmond home – this one was staged for illustration purposes for the News – we were reliably informed this was kind of what it looked like in real life, so to speak.

The Richmond cuddle parties of the time were organized by Karin Whittaker, who started them after noticing there was a vital ingredient missing from her life.

About a year ago, while on a break from her partner and while her daughter was traveling overseas, Whittaker wasn’t feeling her usual, bouncy self. It was only when she started taking a long, hard look at her circumstances that her dawn of realization broke.

“My life spark was diminishing…and when I connected the dots, I realized there was a void; I was in a hug-free, massage-free desert,” said Whittaker, who at the time was on sabbatical from her job teaching pre-schoolers in Richmond,” she told the News at the time.

“I started asking friends to give me a hug; asking them to hold me and I noticed then that my bounce was returning.”

Shortly afterward, one of Whittaker’s friends told her about cuddle parties she saw on the TV news.

Whittaker took the next step by going on a six-week program en route to becoming an official “Cuddle Party facilitator.”

She started hosting parties once a month at her Richmond apartment and they got so popular, she ran them almost every weekend.

So, what happens at a Richmond Cuddle Party?

Despite the intimate nature of the interactions, sex is not on the menu – it was all strictly fully-clothed and platonic.

“The workshop at the start (of a party) creates the safety and interaction between the participants; sets the guidelines and boundaries and usually lasts for about an hour and starts off with a ‘welcome circle.’ It ends with participants practicing saying ‘yes’ and ‘no’ to each other’s requests,” explained Whittaker back in 2015.

Asked to explain “freestyle cuddle time,” Whittaker rattled off a shopping list of potential snuggles, including: Shoulder rubs; sitting huggles (side-by-side but facing opposite directions); spooning; spoon trains (as per spooning, but with multiple bodies lined up); puppy pile (imagine a pile of puppies clambering around each other).

Actually, it was this reporter whose assignment it was to “get into” the story, as such, and partake of the cuddling in the boardroom.

Given that I’m not exactly known as a cuddler, this was alien to my nature and, regrettably, it was only later, when writing the feature that I revealed to Whittaker how uncomfortable I had been throughout the experience.

She, quite rightly, chastised me for not owning up to that fact until after publication and said she would have backed off if she had known.

I will, for sure, let the organizer know the next time I take part in a cuddling session with strangers.