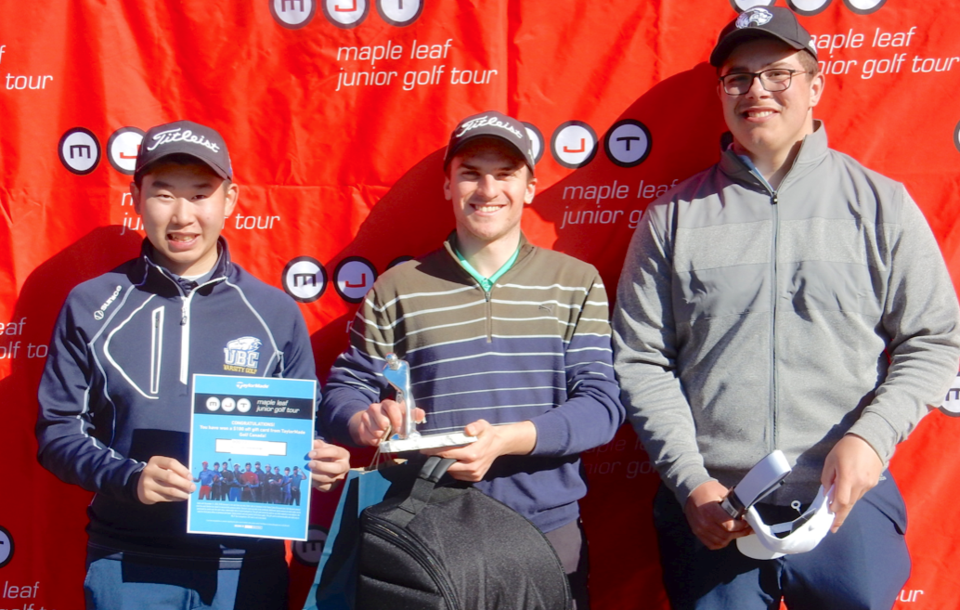 There was plenty of local flavour among the top Junior Boys finisher at the Maple Leaf Tour's season-opneing event at University Golf Club. Winner Ilirian Zalli (centre) plays out of the Richmond Country Club. Finishing in second was local standout Brycen Ko (left).submitted

Marking the opening, and now temporary suspension due to the Coronavirus COVID-19 outbreak, of the 22nd season on Canada’s number one-played junior tour, a packed field of young competitors showcased exceptional talent and perseverance very early in the golf season.

Brycen Ko, confirmed his status as one of the province’s top up-and-coming players, finishing in second place in the Junior Boys Division with rounds of 73-73-72.The 16-year-old Grade 11 student will be taking his career to UBC upon high school graduation after committing to Thunderbirds program back in June.

Ko finished six strokes back of Vancouver’s Ilirian Zalli (72-69-71). The 17-year-old happens to play out of the Richmond Country Club and is the defending BC Junior Boys champion. Another local player — Sangvin Kang — finished 13th with rounds of 85-85-75.

In the Juvenile Boys Division, an impressive bogey-free final round 72 earned 14-year-old Daniel Xu third place. He was four shots back of Langley’s Danny Im.