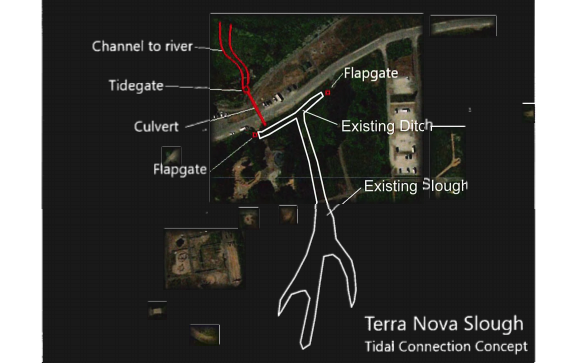 Coun. Harold Steves would like to see a simple solution to allowing chum salmon to spawn in the Terra Nova Slough: just build floodgates.

A $6-$7.5 million plan proposed by the city in 2018 to build an outer dike to allow water to flow into the Terra Nova Slough was, in Steves’ opinion, “silly,” and he thinks it can be done more simply like it was done in the past.

“Put in a proper floodgate and you only have to open it once or twice a year at low tide,” he told the Richmond News in January as he waited for a report to come back to council on the proposed project.

City staff have now come up with a new plan and they are recommending spending $2.5 million on a floodbox with a self-regulating tide gate.

The project would would require a tunnel under the existing dike connecting it to the middle arm of the Fraser River. Staff note in their report to council that juvenile salmonids might be reluctant to go into dark tunnels.

The slough is currently a freshwater pond and needs significant work to rehabilitate it.

It would be drained and cleaned of sludge that has gathered on the bottom, then it needs to be regraded to allow water to flow in and out.

Silt would be used from the Fraser River to fill in low points.

The slough banks and intertidal area would be planted with native species to stop invasive plants from taking over.

The floodbox would cost about $250,000 per year to maintain and the project would require an agreement with the Department of Fisheries and Oceans.

Steves pointed out a lot of historical knowledge on building floodgates along the dikes has been lost as experts have passed away.

But his vision in building a floodgate in Terra Nova is to bring back salmon which are dying off.

The Terra Nova Slough would be a good temperature for chum salmon, but it is too warm for sockeye, Steves said.

If the Terra Nova project works, there are several sloughs, for example, Bath Slough located east of Number 5 Road south of Cambie Road, that could be opened up for salmon, Steves added.

Council will look at the proposal at Monday's general purposes committee meeting.