City councillor Au says “disappointed” after no one backing him up to list hate crimes as this year’s working priority.
Apr 28, 2021 11:00 AM By: Nono Shen 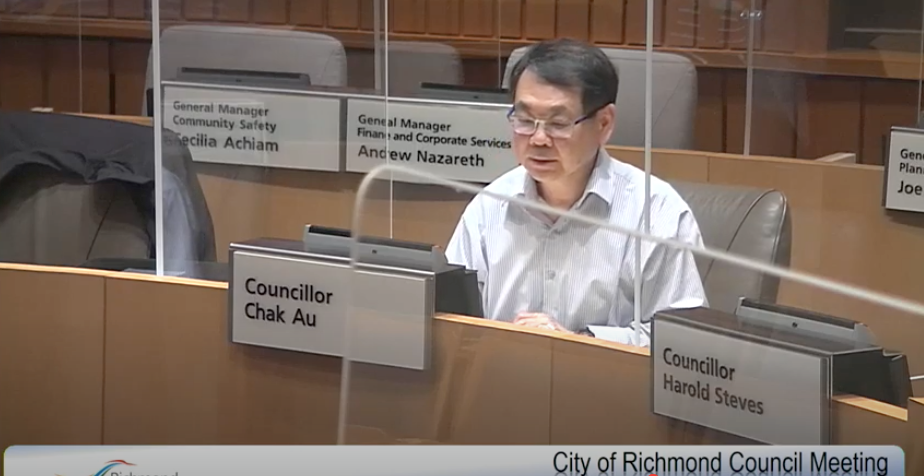 Au insisted that hate crimes should be included as the fifth priority on the work plan.Screenshot from the city's video

When the majority of council didn’t support him at Monday’s meeting in adding “hate crimes” as a priority to the RCMP’s upcoming work plan, Au voted against the plan saying it was sending the wrong message.

“We may say we would like to ask the RCMP for more information but without making it a priority, or even considering making it into a priority, I think this is sending the wrong message to the public. It’s insulting the public,” Au said.

Au asked for hate crimes to be included as the fifth priority on the work plan, but only Mayor Malcolm Brodie and Coun. Michael Wolfe supported sending the plan back to staff to explore this.

At the council meeting, Richmond RCMP Chief Supt. Will Ng said hate crimes are considered a significant priority, and they investigate them extensively. But it's challenging to measure hate crimes against other crimes.

Ng told council the RCMP are collecting hate crime data, but it’s not currently included in the monthly report to the community safety committee.

Coun. Bill McNulty said he’d make sure the statistics were added onto these reports.

However, Au told the Richmond News that not adding hate crimes to the work plan as a priority is like “adding salt to the wounds of victims.”

The RCMP’s priorities in its 2021/22 work plan are property crime, organized crime, road safety and vulnerable persons, which Ng called their “daily focus.”

Ng said the RCMP have implemented a full-time diversity unit and trained all officers on how to investigate hate crimes.

"But the actual measurable might not be as easy as reduction of property crimes, mental health services or organized crimes initiatives and also road safety. Those are easy to measure versus anti-hate, which is a bit more challenging to measure although we do keep track of our incidents of hate," said Ng.

But Au pointed out a dramatic increase in hate crimes has been seen in the news, and racism has worsened during the pandemic.

“There is a crisis going on here, but why not list them as a priority to work on," said Au.