The River Green development recently unveiled an inspired link with the adjacent landscape and its history with a pair of public art installations. Located in two landscaped areas are Fish Trap Way and East/West Promenade.
Jul 24, 2014 4:40 PM By: Richmond News 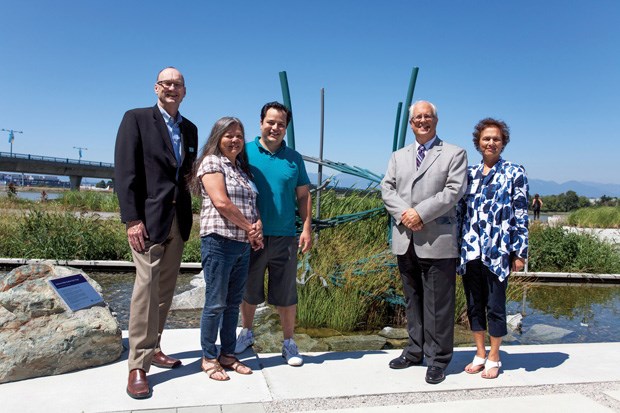 The River Green development recently unveiled an inspired link with the adjacent landscape and its history with a pair of public art installations.

One piece is located on Fish Trap Way which runs along the dyke between River Road West and the Richmond Olympic Oval and is the work of renowned Coast Salish artist Susan Point and her son Thomas Cannell.

Together, they created a four-part installation representing spawning salmon and their historic importance to the Musqueam people.

According to River Green officials, for those who walk, jog or bike on the dyke, they will be able to enjoy the pieces and learn a bit about the First Nations’ culture and history.

“This design incorporates the land, the water, the plant-life of both, the full moon, and the rich history of the site is well defined by the fish trap with bountiful fish,” said Point in a press release. “The sculpture(s) to us means keeping a Musqueam footmark on the traditional land of our past, present and future.”

The piece was constructed in four parts and represents spawning salmon and their importance to Musqueam culture. The installations include two stunning Salish “markers” fashioned in basalt that represent the journey salmon must make in order to maintain their survival.

One marker depicts juvenile fish splashing about their tributaries; the other marker shows adult fish determined to swim against the current. The third piece is an elegant, aluminum interpretation of a fish trap that the Coast Salish people would use to harvest the salmon.

And lastly, there is a Coast Salish Medallion inlay that represents the salmon waiting for the full moon before spawning can begin.

millions of fish in the water. It was given the name ‘Black Waters’ because the water literally turned black from all the fish.

Titled stillness and motion, the artists adopted the Great Blue Heron as the focal point of the work; a bird common in Richmond.

The art blends the glass façade of the bridge with a translucent video of the herons at rest, nesting amidst trees to create a spectacle for those walking under or through the walkway.

“Stillness and motion is a monumental, translucent image that extends the length of the bridge so that you walk alongside life-size herons nesting, an intimate, almost domestic view,” said Metz in a press release. “At night, you see a heron slowly moving, beating the air, fluttering in a continuous loop — a bright, moving, presence, powerful yet gentle.”

“We are very proud to have such well-known artists create public art at River Green for both the residents and public to enjoy,” said John Ryan, vice president of development of Aspac Developments, the company building River Green. “Their presence here is a legacy for both the City of Richmond and Aspac Developments. We are happy to have their art integrated and showcased within our community.”

In addition to honouring local artists for their contributions to Fish Trap Way and the East/West promenade, Aspac Developments Ltd. presented Mayor Malcolm Brodie with a table made from oak trees that were planted by one of Richmond’s pioneers, Samuel Brighouse.

One of the River Green development stipulations was for Aspac to reuse wood from trees cut down on Aspac properties just east of the Olympic Oval; properties that used to be a part of the Brighouse homestead.

Aspac met that obligation and will be commissioning more artists in the near future to create wood pieces for use at River Green.

Richmond high school offers a ‘safe place’ for LGBTQ2S+ victims
Dec 2, 2020 3:00 PM
Comments
We welcome your feedback and encourage you to share your thoughts. We ask that you be respectful of others and their points of view, refrain from personal attacks and stay on topic. To learn about our commenting policies and how we moderate, please read our Community Guidelines.