Cooking up a storm in Richmond's friendship kitchen

Community program fosters culinary and language skills across all ages and ethnicities
Jun 22, 2016 11:07 AM By: Alan Campbell 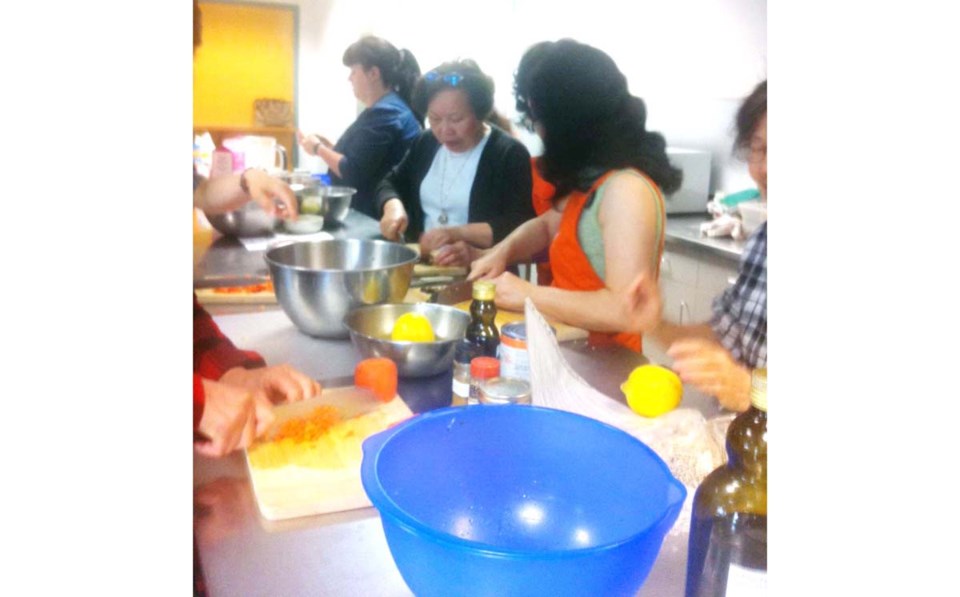 Family Services of Greater Vancouver runs several community kitchens across Richmond, above and right, for people of all ages and backgrounds.submitted

Suffice to say, the Community Kitchen program run in Richmond by the Family Services of Greater Vancouver doesn’t just hone your culinary and grocery budget skills.

For the last 11 years, the program facilitator, Minoo Javadi, has been bringing people from all ethnicities together, at four locations across the city, to cook, learn about nutrition, improve their English skills and, just as important, to socialize.

“It’s mainly for people who want to learn more about cooking and healthy eating; it doesn’t matter if you’re not low-income; it’s about people getting together,” said Javadi.

“It’s very social, so it’s perfect for people who feel isolated; people that are new to the country and don’t have relatives, for example.

“It doesn’t matter if they’re young or old; it’s about people getting better at cooking. And we can also connect them to the community resources.”

“We have a very wide variety; newcomers; seniors who love getting out and meeting new people,” said Javadi of the type of people signing up for the program.

“There are Russians, Chinese, Southeast Asians, East Indians, all kinds and aged from 18 to 90.”

The classes, said Javadi, are all in English and “Everybody cooks, it’s very hands-on.

“There are two or three people per group learning three or four recipes each session.

“They all get to learn about each other’s cultures and they often add in their own skills and suggestions. It’s easy cooking and healthy cooking; it’s a lot of fun as well.

“We do partly incorporate each other’s cooking and some changes to recipes get made, especially if they want to show us something.”

The program is free, but $6 is asked for to pay for the ingredients. Each session lasts for two hours and there’s usually eight to 12 people in a session.

Do people really make friends at the community kitchens, though?

“Big time. Lots of friendships have been developed in the program over the years,” added Javadi.

“And it’s not just friendships; there is baby-sitting and job ideas exchanged; it becomes like a family.”

If you or someone you know might be interested in the Community Kitchen program, call 778-885-5165 or 604-279-7100. Or go online to FSGV.ca/find-the-support-you-need/community-connections/community-kitchens.

Children can also participate in an accompanying play-to-learn program, while their parents are in the cooking sessions.