Tackling foreign speculation and money laundering in the real estate industry is a key component of both the BC NDP and BC Green Party housing platforms this election.
Apr 26, 2017 1:31 PM By: Graeme Wood 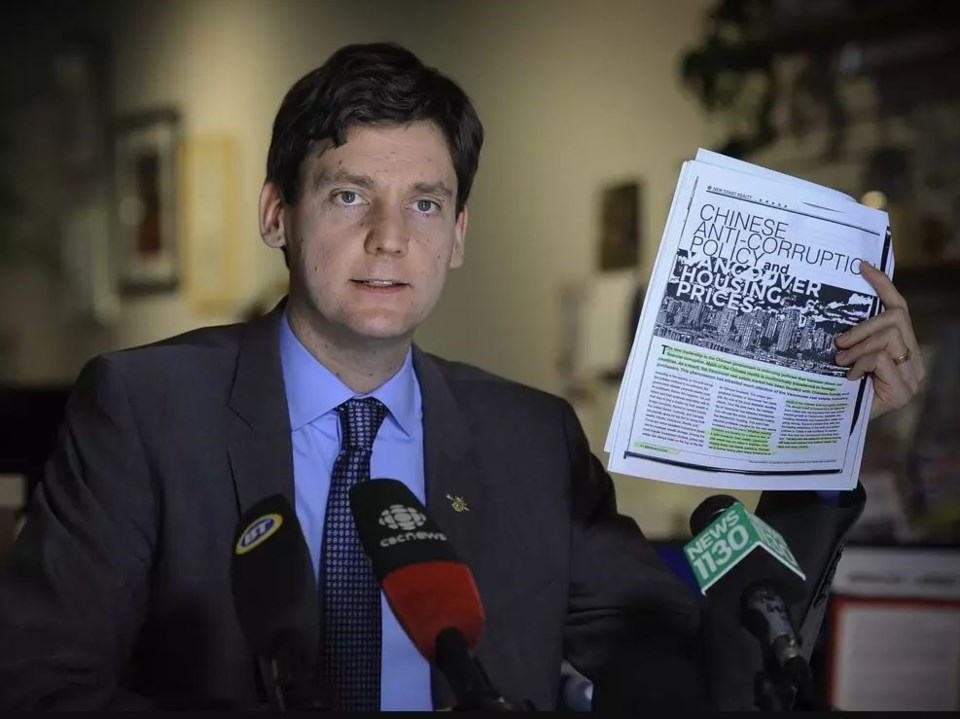 Tackling foreign speculation and money laundering in the real estate industry is a key component of both the BC NDP and BC Green Party housing platforms this election.

“The concern is, the housing market is being used as an easy way to conceal and facilitate money laundering,” said David Eby, Vancouver Point Grey MLA and Opposition Spokesperson for Housing.

Eby said house prices should correct in Richmond, in part, with measures his party proposes.

With Richmond at the epicentre, foreign money in Metro Vancouver real estate became a hot political topic last year, culminating in the BC Liberals 15 per cent foreign homebuyers’ tax.

However, the BC Liberal housing platform this election is focused on increasing housing supply and assisting people in entering the market, namely with subprime loans of up to $37,500.

But Eby still believes there is a problem with “hot” foreign money in the market, resulting in local incomes that are “wildly inconsistent compared to house prices . . . We want to get to the bottom of that,” said Eby.

In particular, Eby wants to close a loophole whereby a home can be bought by a shell company, which is then sold. Because what’s being sold is now a company, not a property, the buyer can get out of paying the property transfer tax (PTT) and the foreign homebuyers’ tax. More so, the beneficiary doesn’t even have to be named.

Meanwhile, the Greens are proposing to apply the PTT to the transfer of beneficial ownership as well.

The NDP is proposing a two per cent annual property tax surcharge on “absentee speculators,” which the party said is expected to generate $500 million over three years. The Greens are proposing a similar measure.

The speculators’ tax would be linked to a homeowners’ income taxes, with the likes of senior citizens being excluded, said Eby.

It’s a measure advocated by economists at Simon Fraser University and University of B.C.

UBC economist Tom Davidoff said the move is a good step toward affordability.

“What matters most is making sure we have a tax system that encourages people to make a living in British Columbia rather than encouraging people to invest in property here. While the government has taken some recent steps towards that direction, there’s more that can be done. So far, both the NDP and the Green party have suggestions in their platforms that go in that direction,” said Davidoff.

Eby is also calling for more advocacy from the province to prevent money laundering and ensure non-residents do not claim capital gains tax exemptions on home sales.

Davidoff couldn’t speculate how closing this loophole would affect the market, but his “sense” is that capital gains cheating is “large.”

Steveston-based international tax accountant Steve Flynn, of W.L. Dueck & Co., suggests the Canadian Revenue Agency hold the tax at the time of sale and only reimburse the exemption when residency is proven.

“We’re not doing enough to enforce the laws that exist,” said Flynn, noting the U.S. has more robust measures.

The Greens go a step further than the NDP in doubling the foreign tax to 30 per cent. Since its Aug. 1 implementation, single-family home sales have plummeted, but prices have remained relatively stable, per market data.

Realtor and real estate blogger Steve Saretsky said pre-sale condos are not subject to the foreign tax, nor PTT, and as such are being marketed offshore and then flipped, thus driving up prices and fuelling bidding wars.

To that end, Eby said, “If there weren’t lineups of families buying condos, I might buy that argument.”

The BC Liberal platform has pledged $920 million to build 5,300 subsidized rental housing units. The NDP has said it will help create 114,000 units of subsidized, co-op and purpose-built housing over 10 years, contingent on help from the federal government and non-profit housing sector.

A BC Liberal spokesperson said last Thursday that Housing Minister Rich Coleman was unavailable to comment.

Saretsky said the general sense from insiders and clients is that a BC Liberal win would continue the upward trend in the housing market.

“I think there’s a lot of people hoping for affordability; they’re sick of the status quo,” said Saretsky.