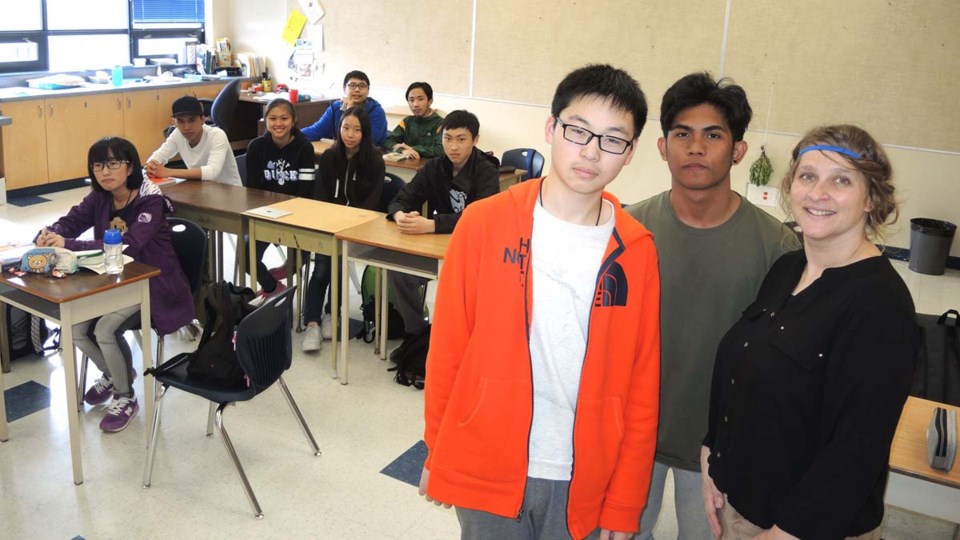 If they didn’t know anything about politics in B.C. before, they certainly do now.

The ELL (English Language Learners) class at Palmer secondary got a crash course in the province’s electoral process after it volunteered to run the school’s Student Vote.

The “vote” was a mock election, which took place in 1,092 B.C. schools, representing all 87 electoral districts in the province, where 170,238 ballots were cast, based on the actual candidates running.

Most, if not all, of the class — which consists of Grade 8s to 12s — are recent immigrants to Canada, making the learning curve for the students even steeper when it came to familiarizing themselves with the likes of political party platforms and agendas.

Two class members, Joe Zhau, Grade 10, and Orly Agoncillo, Grade 11, for example, both knew next to nothing about Christy Clark, John Horgan and Andrew Weaver et. al before they jumped knee-deep into the swamp that was this week’s B.C. election.

“It was a great experience for us, as we are not 18 yet and can’t vote. And it helps us learn,” said Joe, a recent immigrant from China.

Orly, meanwhile, moved to Canada from the Philippines less than a year ago and his only knowledge of elections was tagging along to a polling station with his parents in his native country.

“We had about a month to learn about the history of the election and find out about the parties and their leaders, it was quite interesting,” he added.

Ahead of Palmer’s Student Vote, Joe, Orly and the rest of the ELL class advertised the “election,” prepared the ballot boxes and information sheets about the parties, before hosting a “polling station” in their classroom the day before the election, culminating with counting the votes.

All 218 students who were asked to take part voted — with five who weren’t invited also making their mark, resulting in a turnout of more than 100 per cent (rest of Richmond take note).

In the Student Vote provincially, which has been running since 2003, the NDP formed government with 60 seats, the Green Party formed the official opposition with 14, while the Liberals won only 12 seats. One independent candidate was elected.

But what did Joe and Orly think of the actual result which, at the moment, has the BC Liberals holding a super slim minority government over the BC NDP?

Neither Joe nor Orly stayed up to the early hours to watch the neck-and-neck race unfold. Both had to get up early in the morning for class, which was good news for their ELL teacher, June Sanders, who spoke of the “straight-up student engagement,” as being one of the primary benefits of her class running the vote.

“From an ELL perspective, some of them are coming from a place where they believe the government is corrupt; so they’re learning the idea of a free and fair election and that people have a choice,” said Sanders.

“There is a culturalization process and the younger the voter intervention, the more likely they are to vote as an adult.”

Sanders also said the whole process was a “good bonding experience, for them and us.”

As for the students, Joe and Orly feel they’re now better equipped to make decisions for themselves when it comes to the real vote when they’re old enough.

“We already know how to choose a leader and know how to judge a platform and not just for fun; instead of voting for no good reason,” said Orly.