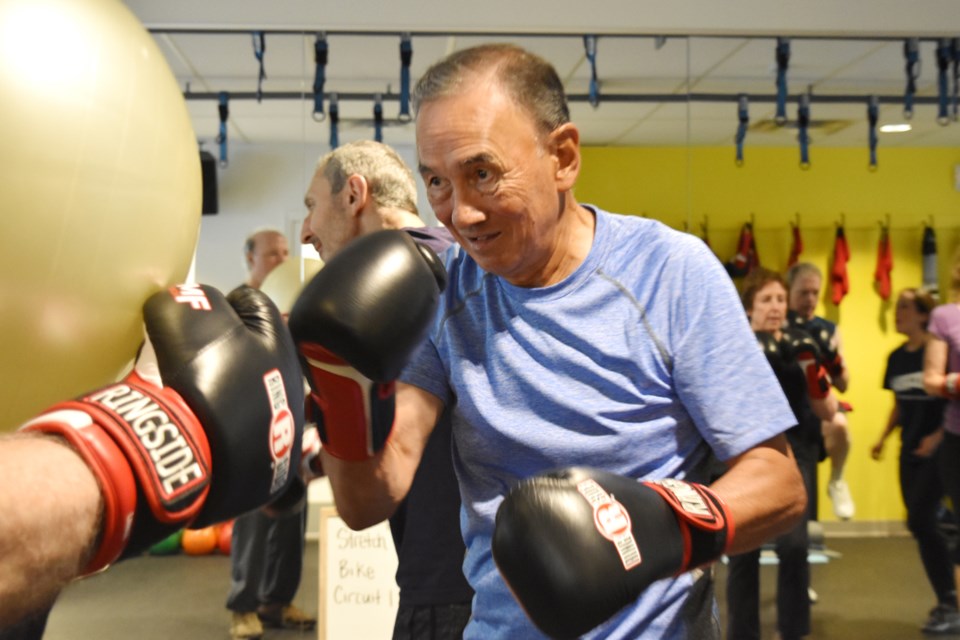 Richmond's Sid Fattedad works out during a Rock Steady Boxing session which is designed to help those diagnosed with Parkinson's disease. Photo by Philip Raphael/Richmond News

At the top of his backswing, Richmond's Sid Fattedad paused for what he thought was a brief moment.

But those in his group making their way around Quilchena Golf and Country Club watched as the delay became more pronounced.

“I kinda forgot where my club was,” said Fattedad.

It was a sign, one of a few, which had started stacking up for the then 68-year-old former airline executive, who was prominent in the industry in the early 1990s, guiding an employee takeover of Canadian Airlines International.

“At the dinner table, my family would wonder why I was eating so slowly,” he said.

“Then I’d stop talking in mid-sentence. It would also happen when I was walking.

“I’d suddenly stop,” he said. “It was weird because, for the most part, I didn’t notice anything different. Other people around me did.”

A trip to his GP, then a series of tests, confirmed it was Parkinson’s disease. That was four years ago.

Since then, medication, regular doses of exercise walking the golf links and working out at his home gym in Terra Nova has helped Fattedad get back his swing and limit the pauses.

Now 72, Fattedad recently added a new weapon to combat the disease which affects more than 100,000 Canadians, with symptoms that include trembling in the hands, arms, legs and face, stiffness in the limbs and torso, as well as slow movement and poor balance and coordination.

He’s donned boxing gloves and is fighting back with the help of Rock Steady Boxing.

It’s a Vancouver-based affiliate of a program originally developed a decade ago in Indianapolis, Indiana that uses boxing drills to form a non-contact series of exercises tailored to help those with Parkinson’s.

And although he’s only been at it for three, weekly sessions, the effects are already showing.

“My wife tells me that when I come back, I look like a younger guy,” Fatteded quipped.

“But come back in 10 or 12 weeks’ time and I’ll have a much better feeling for what kind of effect it’s had.”

Impressed with Fattedad’s progress and approach is Allie Saks, who runs the Rock Steady Boxing group that trains out of the Seacity Fitness gym in Downtown Vancouver.

“Sid is awesome. I’m so impressed by him,” said Saks, an occupational therapist.

“He’s managed to remain so physically active despite his diagnosis, which is great. I was blown away. He’s got great footwork. And he’s also got such an amazing attitude, which really helps.”

Saks said she got involved with Rock Steady after seeing a TV news report last November when she was working in an acute care hospital.

“I was seeing a lot of people there being diagnosed with Parkinson’s who didn’t have an option of what they could do to fight back,” she said.

“So, I decided I needed to go do the (Rock Steady Boxing) training in Indianapolis.”

Saks said all of the exercises are tailored to help with the effects of Parkinson’s.

“We work on balance and posture, gait, speed of movement, eye-hand coordination, gross motor movements and improving range of motion.

“It was developed by a team of neurologists, researchers, boxing coaches, physiotherapists and occupational therapists.”

And while the medical community is still sorting out just how much of an effect regular exercise plays in improving the health of someone diagnosed with Parkinson’s, Saks said Rock Steady coaches she’s spoken to have seen a delay in progression of the disease, plus an improved quality of life for their clients.

“Many of these people wouldn’t be doing much otherwise and are often embarrassed to go to a standard exercise class where they would likely stand out,” Saks said.

“Here, they all fit in and develop connections which is huge.”

For Fattedad, the effects to date have been positive.

“I feel euphoric. I’m in a buzz for about two hours afterwards,” he said. “That’s part of the routine, get my heart rate going and blood pumping. It picks me up, because most of the people I know with Parkinson’s are fairly immobile. And when they come to this they need the exercise.

“Plus, this helps with my core strength which is good for my golf game.”

It’s the same pragmatic, measured approach Fattedad displayed during his airline career — at a time three decades ago that was fraught with high emotion and economic changes - that held hundreds of jobs and livelihoods in the balance.

Stressful times to be sure, as he was front and centre, battling in the boardrooms and frontlines, as the landscape of the airline business in Canada shifted.

So, how do the challenges of then compare with those of today for him?

“Back then, that was far more strenuous and stressful,” Fattedad said, as he prepared to fold over the Velcro strips on his boxing gloves for a session with the Rock Steady Boxing group.

“They (airlines) had their own agenda. I had mine, supporting the employees. And we succeeded.

“Ultimately, it was a win. But it was a very stressful time for me. Probably the most rewarding part of my career, though.”

Staying physically active is a big part of the battle now for Fattedad.

He’s upped the number of rounds at Quilchena to three to four times a week.

He works out in his home gym with weights and does exercises to improve his balance.

He’s even picked up his drum sticks on a more regular basis.

“I used to be part of a teenage idol rock band growing up in Hong Kong called the Kontinentals,” Fattedad said.

“It was made up of a bunch of schoolmates at King George V school. We were from everywhere – England, Sweden and Canada.”

They became pretty popular on the local Hong Kong music scene playing a lot of British pop music of the day, including the Beatles, and Fatteded was their Ringo Starr.

Most of the group ended up reconvening in Vancouver in the early 1960s and became Five Man Cargo.

Five Man Cargo became one of the top bands of the day in Vancouver and were managed by a then-young Bruce Allen, who is now agent to stars such as Michael Buble, Bryan Adams and Jann Arden.

“We played at Marco Polo, The Fifth Day Club, The Breakers down in Point Roberts and Lassiter’s Den in East Vancouver,” Fattedad said.

“And then the Five Man Cargo showed up,” he said. “They played music made popular by the Beatles, The Hollies, The Walker Brothers, and The Spencer Davis Group.”

They turned the Lassiter’s Den at Commercial and Broadway into the hottest club in the city.

“My business began with the Five Man Cargo,” Allen said. “Sid Fattedad was the drummer, he was fierce. Intense. Focused. He was the driving force that a rock band needs. But he was not overly loud or dominate. In other words – he fit in beautifully.

“That intensity exhibited itself off the stage, as well. He was the conscience of Five Man Cargo, as well as the foundation of the rhythm section. Sid cared. And you can’t ask for more than that.”

Today, the drums serve as a good workout.

And he knows the importance of remaining with the program he’s set out for himself, staying motivated and active.

“I guess it’s matter of sticking to the job at hand and fighting my way through,” he said.

“Having Parkinson’s, it’s a constant reminder that if I don’t push myself I will start feeling it.”

While he admits to not being one who’s comfortable doing their own thing in a gym, Fattedad said he enjoys the structure and camaraderie found with the Rock Steady Boxing group.