Leaving the Life behind: Gang enforcer wasn't scared to die 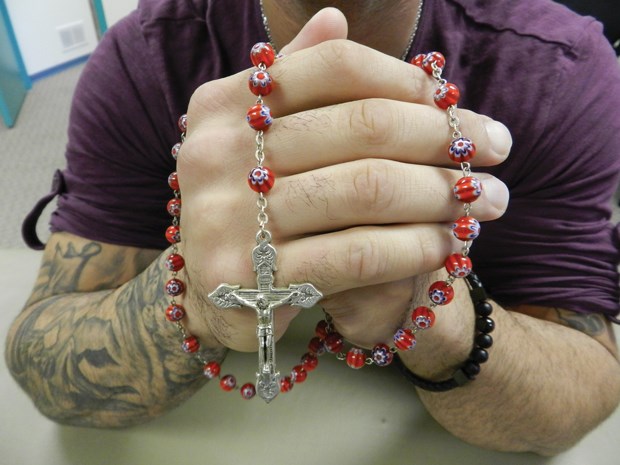 Former gang member “Joe” has rediscovered his faith since entering Amir Javid’s StreetsSmarts program. He now focuses on a nine-to-five career and gains respect from sources other than fear. Photo by Philip Raphael/Richmond News

“I felt powerful and not at all scared to die.”

Judging from Joe’s appearance — the well-toned and capable physique of a prize fighter, a sleeve-length of tattoos on his right arm depicting a voyage from heaven to hell, and an angular, rigid jawline — it backs up his frank comment about a former life as a gang enforcer and debt collector.

“I also wanted to be feared and respected,” he added.

Joe, a name he adopted for this story, managed to attain all that and more during his time “living the life.”

“I was dominant, very secure and pretty much untouchable,” he said. “For me, this is really what I wanted.”

Today, just over a year on from serving jail time for his activities, the Richmondite, now 26, is following a much different path.

He’s traded in the thrill of being an effective intimidator for his “crew,” the money, women, fast cars, penthouse suites and mansion parties for regular, weeknight gatherings in a local gym with a group of young boys intent on learning from him lessons of athletic and mental discipline.

The about-face from violent deal closer to youth role model has not been an easy transition since the roadmap for such an odyssey varies for those seeking a return to mainstream life.

Thankfully for Joe, and others like him, there is a guide, someone who knows intimately the path he has travelled.

Amir Javid was a gang member. Also from Richmond, he ran with a bad crowd in his youth, graduating through the ranks to be a trusted member.

Photos of his old life tell part of the tale — brazenly clutching a handgun while embracing his twin brother, Abbas, who narrowly avoided being tried as an adult for attempted murder following a vicious stabbing at a house party.

Today, Javid uses the images as an example of how far he’s come, and where he attempts to take others enrolled in his StreetSmarts program, offered through Richmond’s Touchstone Family Association.

StreetSmarts has been developing gang exit strategies since 2011, and is the only program in B.C. to do so.

“Redemption is a long road,” Javid said. “I like to call it the journey back to innocence.”

Much has to be overcome, starting with the void many youngsters experience in their lives.

For Joe, it was the isolation and anger he felt at 16 when his parents divorced.

“I thought that maybe they didn’t care about me anymore,” Joe said.

He knows now that wasn’t the case, but as a young teen it stirred up emotions within him that eventually led to seeking ways of unleashing them.

At first, it was “small stuff”— getting in trouble at school, skipping classes, getting in fights.

An aspiring karate champion, he turned his skill from provincial competitions to the streets.

“At that point, I kinda decided what I wanted in life. And one of the things I wanted most was to be respected and feared by people,” Joe said.

Once he left school and turned 19, Joe found himself recruited by a gang that offered him the sense of brotherhood, belonging and respect he craved so much in his adolescence.

“You’d lay down your life for one another, that’s a big deal. And as a young kid it was something I was always seeking.

“That camaraderie, that closeness, it really brought it home for me,” he said.

It satisfied the emptiness inside.

Then came the surly manifestation of “the lifestyle.”

“It was mostly extortion. I was a debt collector. That was my gig,” Joe said. “We were never really into drugs. It was there, but it wasn’t the bread and butter of what we did.”

Joe was vague about what acts he committed.

“Put it this way, at the end of things, people always ended up paying, one way or another. Use your imagination,” he said, adding he had a unique way of justifying the brutality he meted out.

But he wasn’t stealing from the rich and giving it to the poor. He was collecting on business deals gone sour or drug debts. And it added up.

“I’ve probably counted, through my own hands from the collections I made, about $1 million, easily.”

Helping fuel Joe’s activities was a steady diet of steroids.

“I had a lot of insecurities and thought the bigger I could be the more people would be intimidated by me,” Joe said.

With an inner rage still burning inside him, adding steroids was like pouring gasoline on a fire.

“The heavy doses made me really emotional — raging, extremely depressed. Just every type of extreme emotion — I had it all the time.”

The mixture of violence, money and a belief he was working above the law had him heading in the wrong direction — fast.

“Take all of that money, and put it in the hands of a young man who is insecure, never had any structure, never felt any sense of worth,” Avid said, “then add steroids. What would that do to you?”

It led to jail time — something Joe said he did almost willingly because he refused to roll over on his associates, even though they abandoned him when the law locked him away.

“Being in there was easier than being on the outside. Jail has its own system, and if you’re a tough guy you can manage,” Joe explained. “So I thought, what was the worst case scenario, go to jail. That was fine. No big deal.”

But as time wore one, an unexpected consequence of his incarceration started to point his life in a different direction.

Ultimately, it took tears to turn things around. Not his own, but his mother’s.

“It was when she came to visit me in jail. She was sitting on the other side of that glass (partition) crying when I finally realized what I was putting her through. “At that time she was the only one coming to visit me. All my other friends — people I thought who were my brothers — left.”

It ended up that those “friends” had also put a contract out on Joe’s life before he finished serving his time.

Once out of jail, Joe started piecing his life back together, trying to reconcile relationships with his parents and younger sibling.

Some of that baggage still remains.

“That’s something I can’t change. But I’ve tried to repair as much as possible,” Joe said.

Feeling the need to go further, he sought out Javid and what StreetSmarts could offer him.

Joe dropped all the contacts from his gang life, quit the steroids and retreated to the one positive constant in his life — fitness training.

He got certification as a personal trainer, which he employs in the StreetSmarts program to help encourage youth to seek a better path.

At the root of StreetSmarts is an almost organic approach to remediation, Jaivid said, rather than a clinical one.

“The gang life is all about money, power and respect. I give them truth, wisdom and power,” Javid said, explaining that it’s his turn to fill the void for those wanting to quit the gang life.

“I offer them camaraderie, money and food. And that means a safe place they can come to make a connection with other people, $5 in their pocket, and a meal,” he said.

As they move through the process, there’s also mentorship.

“I am essentially selling them on me,” Javid said.

“I have a family of my own now — a wife and four kids. And I want these young guys to see that and want that for themselves. How they get there is the challenge.

“What they also see is someone advocating for them. That’s big.”

One of the steps along the way are opportunities such as the gym sessions Joe runs — sessions he believes are cathartic.

“It’s humbling that someone would look up to me,” said Joe. “I feel grateful to be in a position to do that,” he said. “I am no longer motivated by fear, money or other distractions. I am living an authentic life where I am my own man.

“My family makes me the happiest now when I see a smile on their faces every day when they see how far I’ve come and what I’ve done,” Joe said.

There are still times, though, when he feels insecure.

“But, just for a split second, I think back to where I was not that long ago, and it kills that right away.”

He credits the development of a strong allegiance to his Christian faith for helping him stay the course.

That’s been enhanced by the fact Javid, an ordained minister, was the one who recently baptized Joe.

It’s a long way from the days when the two were contemporaries in the gang scene — when Joe’s crew carried out a drive-by shooting on Javid’s family home in retaliation for the house party stabbing.

“We came from extreme opposite sides. He was associating with people who made an attempt on me and the lives of my family. But that’s the beautiful thing — there is this reconciliation, this opportunity where people can make amends and still find a way out,” Javid said.

Joe now focuses on his new career — a nine to five existence.

“Here I am, abiding by the rules and taking crap from people who I wouldn’t have hesitated knocking their teeth down their throat,” he said. “It’s been a huge change and struggle for me. It’s taken time. I’m still not perfect. I have made mistakes.

“But I am finding that respect goes a lot further than being feared.”

For every Joe that finds a degree of success, there are plenty of others who fall by the wayside. Some drift back to their gangs. Others end up dead.

Javid knows he can’t provide positive change for all of them, and he takes the failures to heart. But he continues offering his leadership as a guide to a better place he believes can exist, given the support of the community.

“I’ve got guys knocking at my door saying, ‘I’m out, now give me something.’ But what can I offer? They have no job experience to even get a minimum wage job, and that wouldn’t even feed anybody in this city,” Javid said. “It’s an invitation back into community which we don’t have right now. That’s our biggest gap.”