But the Richmond Poverty Response Committee urges council to approve the proposal despite opposition
Mar 9, 2018 8:25 AM By: Daisy Xiong 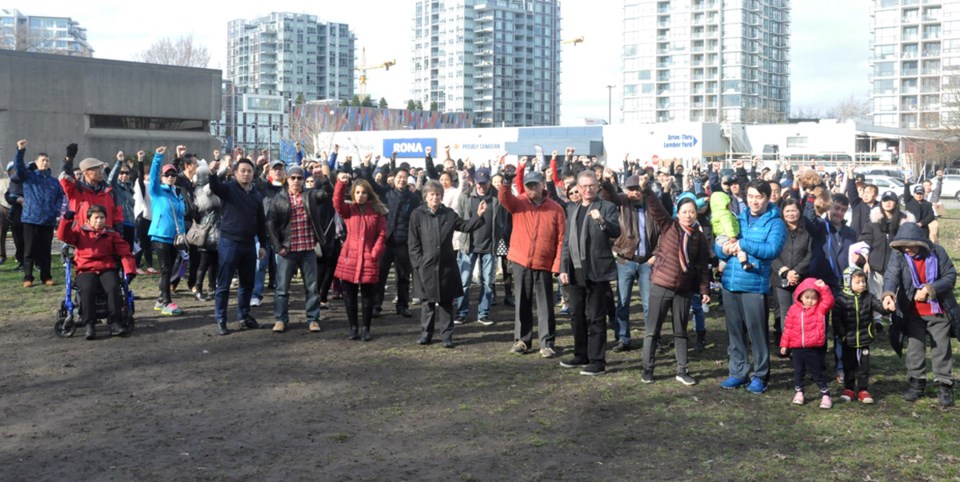 Hundreds of protesters showed up at the site currently being considered for a 40-unit complex to house homeless people. The residents wanted to express their opposition to the project. Daisy Xiong photo

After the RCMP confirmed that last Wednesday’s alleged assault at the Richmond Public Library was unrelated to the homeless housing project open house, public attention is shifting back to the controversial project itself.

The $5.9 million project will provide 40 units and support to homeless people in Richmond.

However, the city will take the land back after five years and residents living on the site will then be expected to move to regular homes or other transition places.

The project has received an “overwhelming response,” according to the city, with 600 showing up at Wednesday’s open house to ask questions and fill out questionnaires.

A few were in favour of the project, but many expressed strong opposition.

A petition against the project, organized via two Wechat groups with more than 800 members, gathered 1,000-plus signatures.

Meanwhile, just over 300 people signed identical letters addressed to each member on city council. The 2,858 letters were presented to city hall Monday.

The organizers plan to copy and send an additional 10,000 letters to the politicians in the upcoming days.

“It’s unacceptable that the city gave us such short notice,” said the organizer, who refused to give his name.

“As residents living here, we should have the right to decide on the project, as it is going to affect our lives and community safety. The government shall not abuse its power.”

Residents questioned the city’s choice to build the housing in a high-density residential area and raised concerns about neighbourhood safety – some are worried that the modular homes will turn the area into “another Downtown Eastside.”

“Within five to ten minutes walking distance of this large community, there are six preschools/day care centres, one elementary school, one seniors home, and Richmond’s speed skating rink,” the letter said.

“Homeless population(s) suffer health problems such as addiction, disease, and mental or physical disability… refusing to carry out a proper background check is undemocratic.”

Residents are also upset that the house will be built on the location which is currently being used as a dog park.

“To us residents, dogs are not just pets but significant family members, especially to seniors who are accompanied by their dogs most of the time,” the letter states.

The organizer also asked, “The proposed housing will only be here for five years, so why not spend the money on building permanent housing elsewhere?”

The groups in opposition to the project are demanding that a public hearing be held to decide whether or not to carry out the project.

A public hearing is not required by city bylaws, given the land is not being re-zoned, but it still is a possibility, according to Coun. Carol Day.

All the letters from the campaign against the project have a small logo at the right-hand corner saying “2018 Richmond Election.”

When asked if this implies council’s decision could affect the residents’ election choices, the organizer said, “We didn’t say it. They can interpret it themselves.”

Simultaneously, a strata council, which manages three buildings next to the site with around 300 residents, has also written opposition letters to the mayor’s office and MLAs, listing 35 questions about the project.

“(We) believe the initiative is a worthy cause… however, no one wants this type of housing or the proposed residents as our neighbours or in our neighbourhood,” wrote Clifton Jang, strata president of Lotus Condo.

“If an owner can objectively prove they have lost money, specifically due to the proposal being nearby, how does Richmond propose to deal with this, or does Richmond merely expect owners to eat a loss?” asked Jang.

“(And) Richmond is filled with luxury cars. Our strata is no different...our members certainly do not feel safe with their vehicles overnight should this housing go forward.”

However, the Richmond Poverty Response Committee (PRC) is “passionately” urging council to approve the proposal despite opposition.

“I’m absolutely appalled that so many people are against it. I thought we had done enough education about the homeless problem in Richmond and how they deserve to be housed,” said De Whalen, chair of PRC.

She worries that city council “will fold on the issue since it is an election year.”

The main problem, according to Whalen, is a lack of understanding regarding who will be housed.

“I don’t know why people are worried about safety issues because those people are right there in that neighbourhood already,” said Whalen.

“As the food bank is near, people who are at risk do go there and they might be living behind the dumpster near your condominium — they are not importing any problems,” said Whalen.

She said residents can still walk their dogs at nearby Minoru Park if the site is taken.

“I was gobsmacked that people living in a condo think it’s more important to give dogs a place to pee than having a place for a homeless person to live.”

She also noted that the feared drop in condo values is a “false premise,” since “all the condos are in a perfect location, which determines their values.”

“A lot of people in Richmond seem to think homeless people are all addicts, and that’s absolutely not the case,” said Bronstein.

“I used to be a little afraid of them before working at the shelter. But then I found out these people are so well-meaning and kind, and want to fit into the community.

“There hadn’t been any problems with the neighbours in my five years working in the shelter.”

She added that the face of homelessness has changed in recent years, as many educated people and those with good jobs have lost their homes “because of one bad turn.”

“The site is close to the food bank, banks, and public transit; it’s also easy to look for jobs within walking distance if you do not have a car or money. The location could help homeless people integrate into society sooner,” said Au.

Mayor Malcolm Brodie told the News council would not decide on the project until it has time to review a staff report, which will include feedback from consultations with the public and stakeholder groups.

Additional information has also been demanded by councillors such as Bill McNulty, Derek Dang and Carol Day, who want to know more about the people moving in, the management of the program and the community impact.

“It appears there is a clash in values between cultural groups,” wrote Steves to a Twitter replier.

“There is an organized ethnic group campaigning against homeless housing.”

500 Asian people go to a Public Information meeting. The librarian gets Karate Kicked by an opponent to housing for homeless people. South Asian landowners are campaigning for 10,764 sq ft houses in the #ALR. Is this multiculturalism? What on earth is happening to #RichmondBC? https://t.co/Rh5QreppRh

But Henry Beh, former president of Richmond Chinese Community Society, doesn’t agree.“It’s not a Chinese community issue, but a human issue that happens to take place in an area where Chinese residents are the majority,” said Beh.

“If this site were in Steveston, people who oppose it would come from other ethnicities.”

About 68 per cent of residents living near the site use Chinese as their mother tongue, according to CensusMapper.ca, based on the 2016 census.

Two similar modular housing projects have either been opened or are opening soon in Vancouver’s Marpole neighbourhood and Maple Ridge. Both have also been protested by residents in the area — the latter has a minimal Chinese population.

Council is expected to decide on the housing project this month. If approved, construction will begin in the summer or fall, and residents will start moving in late 2018 or early 2019.

Proposed units include kitchen and bathrooms. Two staff from RainCity Housing will work on the site 24/7, and a contact person will be there for people to call regarding any concerns. Meals, skills training and healthcare will also be provided at the site.

Last year, 70 homeless people were counted in Richmond. It’s an 84 per cent increase since 2014. Whalon said the actual number is closer to 120.