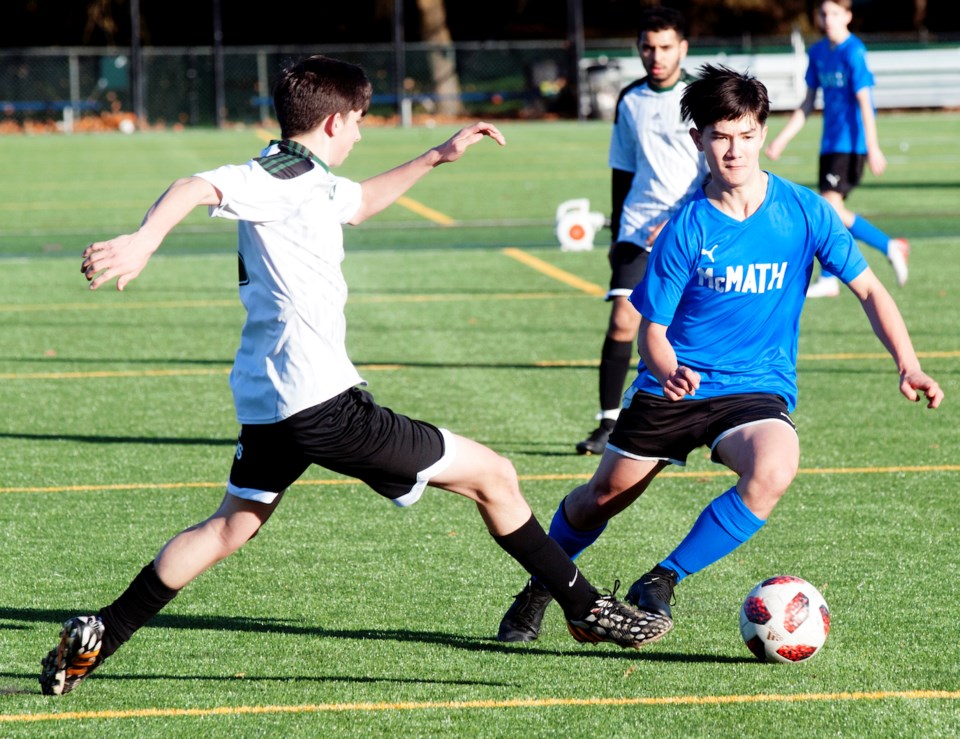 The No. 7 seed McMath Wildcats opened the South Fraser AAA Zone playoffs on Monday with a 1-0 loss to No. 10 Lord Tweedsmuir at Hugh Boyd Park. The Steveston school must now win three consecutive games to advance to next month's provincials.Mark Booth

It didn’t take long for the city’s most dominant team over the past decade or so to discover how treacherous the new South Fraser Zone AAA Boys Soccer Playoffs can be.

The McMath Wildcats opened the 12-team double knockout tournament with a 1-0 loss to Lord Tweedsmuir on Monday at Hugh Boyd. The Wildcats controlled much of the territorial play but were victimized on the counterattack and had difficulty generating chances in the final third of the field.

McMath is the lone Richmond representative in the AAA playdowns that also feature schools from Surrey and Delta. Four berths for next month’s provincial championships in Burnaby are on the line. The zone features three top 10 schools in the latest provincial AAA rankings — Panorama Ridge (No. 1), Fleetwood Park (No. 6) and South Delta (No. 10).

The Wildcats were seeded seventh and will now host No. 8 Guildford Park on Thursday looking to keep their season alive. They will need to win three consecutive games to take their season to Burnaby.

Meanwhile, city teams should have an easier route in AA playdowns with far fewer Surrey teams involved in the tier for smaller schools.

The McNair Marlins rolled to a 5-0 home field win over Pacific Academy on Tuesday to advance to the semi-finals — as did the McRoberts Strikers by the same score against Salish.

The Marlins will host North Delta’s Sands Scorpions on Tuesday at Minoru while the Strikers travel to Surrey Christian.

Burnett bowed out of contention with a 6-1 loss to Sands while Hugh Boyd fell 4-1 to Surrey Christian.