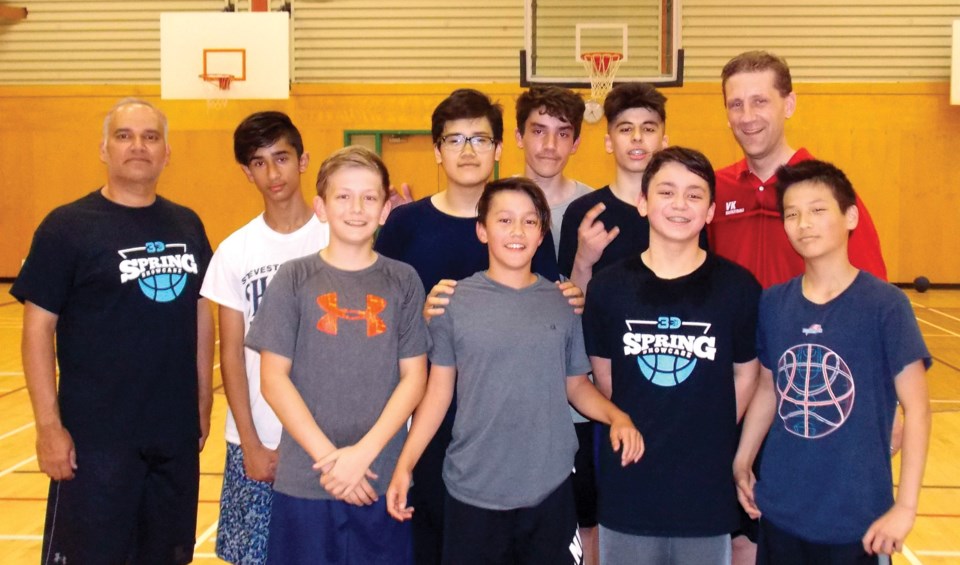 When Chris Kennedy left his teaching position for greater career challenges elsewhere, he looked for another alternative to give back to his hometown. The Richmond Youth Basketball League (RYBL) welcomed him with open arms.
Over a decade later, one of the province’s most-respected hoop coaches remains heavily involved in the non-profit program that is the unofficial factory for developing talent for all of Richmond’s high school teams.
Kennedy can be found in local gyms on Friday nights overseeing RYBL’s various age groups and, remarkably, he does this from September until June.
His dedication was recognized at the recent Richmond Sports Awards when the West Vancouver Superintendent of Schools/CEO was presented with the Don Fennell Award of Distinction.
A year earlier, Tim Carkner was honoured by Basketball B.C. for his outstanding work with RYBL’s girls program. Sean Berda, Dave Giesbrecht and Harley Rollins are other invaluable volunteer coaches who have poured hours of their lives into the organization.
They are doing their best to keep up with the ever-growing passion for basketball and producing impressive talent too.
Since RYBL is run through the City of Richmond, the program has access to high school and community gyms. Throw in “volunteer” instruction and the only costs involved for rep players are tournament entry fees, uniforms and referees.
“It’s keeping some kids in it who otherwise couldn’t afford the game. I think there is a bit of a misconception out there. There is some real financial diversity in Richmond,” said Kennedy. “What RYBL does is make sure all the kids play. We figure it out through grants such as KidSport Richmond.”
RYBL is currently winding down its rep season, which runs from late March until the end of June, and includes U12, U13 and U14 boys teams.
All three were recently victorious at the 3D Basketball Spring Showcase — beating club and academy teams from across the province. The U14 squad also captured the RBL Vancouver Spring League.
The campaign will conclude at the Western Canadian Championships, which takes place June 29-July 2.
The interest for RYBL’s rep teams this season was staggering.
More teams would have been created if there were more coaches to support it. The program not only attracts kids from the RYBL regular winter program but players wanting to prepare for their first-season of school basketball.
“Hundreds come out for rep basketball. Absolutely we turn kids away because we don’t have enough coaches,” explained Kennedy. “We can accommodate all the kids during the regular season because the commitment schedule is light and often we can get high school students who want to coach.
“The rep program is three times a week plus tournaments and you really need to attract adults.”
In its fourth season, RYBL’s graduating rep talent is evident on school teams throughout the city. The end result are leagues that feature plenty of parity as more students make basketball their number one sport.
“I think a lot of people thought as Richmond became more multicultural the basketball might drop because it wouldn’t be a priority sport. Opposite. “Now there are actually more talented teams. You’re not just seeing one or two programs,” said Kennedy.
“Some years it’s Richmond, then Cambie goes to provincials. Then it’s McNair. Very different dynamics in each school. Every part of the community has different hot beds.”
Kennedy returned to high school coaching this past season, joining Anne Gillrie-Carre to guide a promising senior girls team at McMath that features his daughter Elizabeth. She still has three more years of eligibility.
The top 10 ranked Wildcats will be looking to take another step next year and contend with provincial heavyweights. It’s a challenge that will mean more hours in the gym for Kennedy but there will always be time for RYBL programs.
“I look at a guy like Tim and so many times he is in the gym working with other people’s kids and he is coaching his own daughter’s team at McMath too. I think in today’s society, parents spend so little time with other people’s kids,” added Kennedy. “It’s more like if it benefits my child, I will volunteer but it’s hard to build continuity of programs. They usually excel for a year or two then disappear. What we have tried to do is be in it long term.”