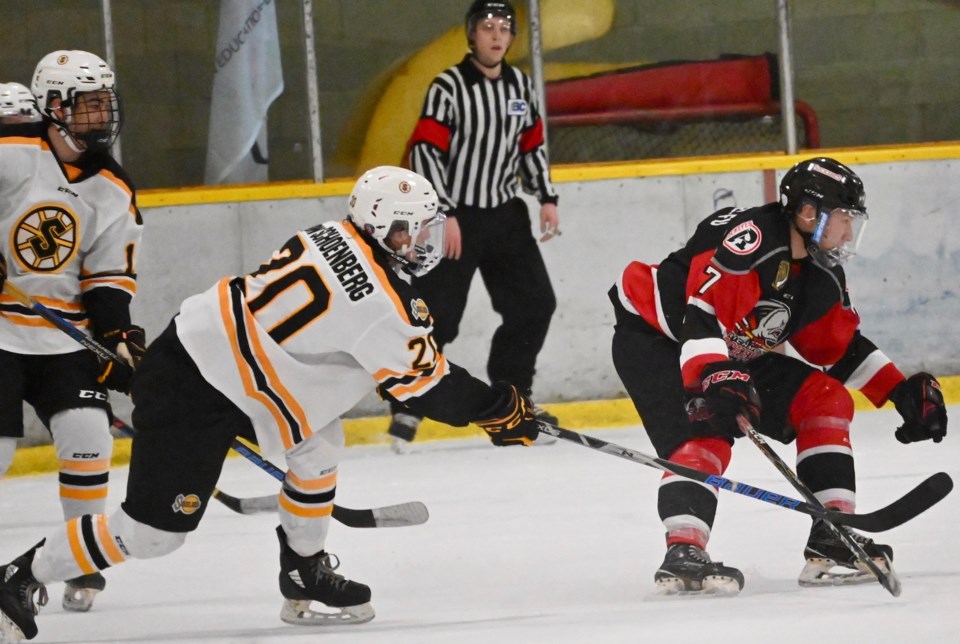 Richmond Sockeyes and Grandview Steelers will play a seventh and deciding game in their PJHL quarter-final series on Monday at Minoru after the Steelers rallied late for a 5-4 victory on Sunday night. Game time Monday is 7:30 p.m.Mark Booth

The Richmond Sockeyes and Grandview Steelers will play a seventh and deciding game in their Pacific Junior Hockey League quarter-final series on Monday night at Minoru Arenas.

The Steelers rallied from a late 4-2 deficit to pull out a 5-4 game six overtime win on Sunday night at the Burnaby Winter Club.

The Sockeyes looked to be in great shape on Jason Lin’s power play goal at the 6:51 mark of the third period.

The visitors even killed off an extended two-man advantage but a cross checking penalty to captain Noah Kelly just over a minute later gave the Steelers some life on a power play tally from Tomslav Zlomislic with 4:48 remaining. Ethan Reilly then equalized during a goal mouth scramble at the 17:51 mark.

With the Sockeyes’ pressing for the potential game winner in the dying seconds, Craig Schouten was called for goaltender interference when he knocked over Cale Dolan.

On the ensuing power play in overtime, Michael Martino completed the comeback just 45 seconds into the 10-minute extra session.

It was the second time the Steelers had battled back from a two-goal deficit in the game after Ryleigh Anderson and Andrew Kemp had made it 2-0 in the opening period. Paul Dosanjh had the other Richmond goal.

Game seven goes at 7:30 p.m. with the winner facing the North Vancouver Wolf Pack in the Tom Shaw Conference finals.