Sockeyes getting their share of Halloween treats against winless Knights 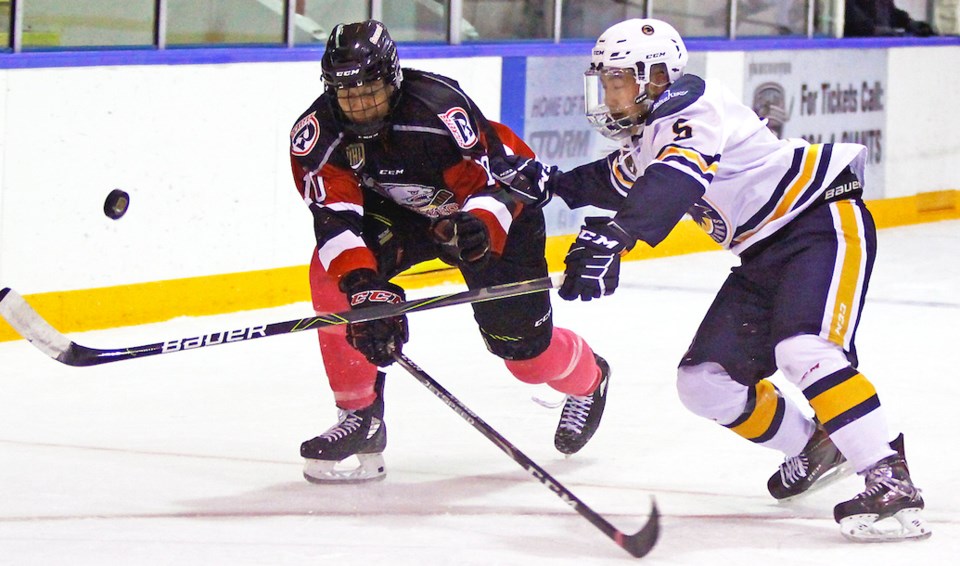 Local product Mattias Hohlweg in action earlier this month in a 4-4 tie against the Delta Ice Hawks. He had a goal and three assists in the Sockeyes 14-3 win at Surrey on Tuesday night.Jim Kinnear

Three straight games against the Surrey Knights is certainly a treat and not a trick for the Richmond Sockeyes.

After a 14-3 victory against the still winless Knights (0-17-0-2) on Tuesday, the teams are back at it tonight at the new North Surrey Sport and Leisure Complex. They will also face each other in a rare Sunday afternoon (4:45 p.m.) home encounter at Minoru Arenas.

The Sockeyes (11-3-1-1) snapped a four-game winless streak in a big way to open the stretch— scoring six times in the second and adding five more in the third.

Richmond was coming off a 6-4 loss at North Vancouver on Saturday as the Wolf Pack (14-1-0-1)  avenged their only loss of the season.

Hohlweg tied the game for the visitors in the early stages of the third before Dominc Davis scored what proved to be the game winner. The Wolf Pack then added an empty netter.

The Sockeyes dropped a wild 8-7 overtime result to the Delta Ice Hawks last Thursday at Minoru — surrendering a 6-3 third period advantage in the process. The Hawks actually took a 7-6 lead with four unanswered goals before Watson equalized with 4:17 remaining.

The 17-year-old Ladner blueliner joined the Sockeyes after playing five games in the Western Hockey League with the Medicine Hat Tigers. He went 65th overall to the Tigers in the 2017 WHL Bantam Draft.