A volleyball talent from Hugh McRoberts secondary has signed for the College of the Rockies men’s Avalanche in Cranbrook for the 2021/22 season.
Dec 14, 2020 10:07 AM By: Alan Campbell 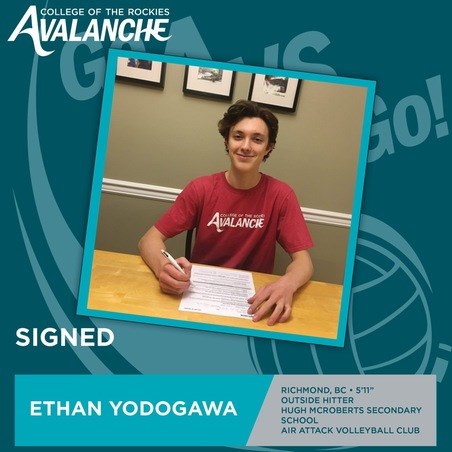 A volleyball talent from Hugh McRoberts secondary has signed for the College of the Rockies men’s Avalanche in Cranbrook for the 2021/22 season.

Ethan Yodogawa - a 5 ft. 11 in. outside hitter - plays volleyball for his high school team as well as for the Air Attack Volleyball Club.

Ethan has twice been named a Richmond Jr. City Champion, earned the role of captain of his senior team at McRoberts, as well as a berth at the AAA BC Provincials and was a member of the BC Canada Games training pool.

"He is an incredible leaper and great competitor with a strong skill-set and a passion for the game.

“He has the desire to work on the smallest details and has the athleticism and skill set needed to play in the PACWEST conference. I'm excited to add Ethan to our program."

Ethan will enroll in the College's Kinesiology program in fall 2021.

"I chose the College because I found their program to fit perfectly with my academic and athletic goals," Yodogawa said on the GoAvalanche website.

"Coach Farrero has been extremely welcoming and seeing the environment that he and his players have created helped me to solidify my decision.  I'm super excited for the future with this team and I look forward to representing the Avalanche!"