Ellie Reid will be back on her hometown field Wednesday night with the TSS Rovers
May 21, 2019 4:23 PM By: Mark Booth 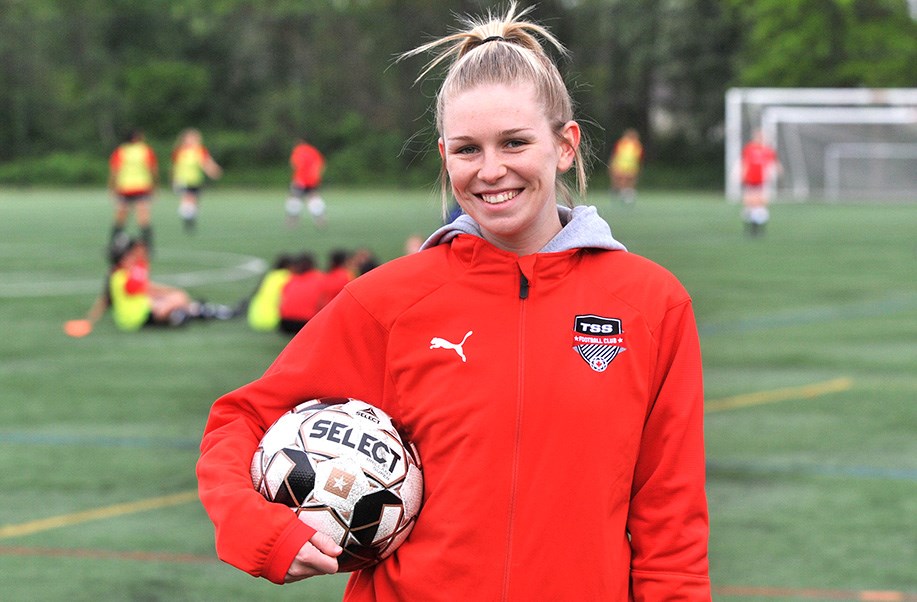 Ellie Reid's return home from Wilfred Laurier University each spring includes suiting up for the TSS Rovers women's soccer team. They will be in action on Wednesday night at Minoru Park.Mark Booth

Ellie Reid doesn’t have to go far to catch-up with the program that greatly enhanced her soccer career.

When the 20-year-old Wilfred Laurier University standout returns to her Steveston home each spring she steps back on the field with the TSS Rovers — a team of past and present players from the Richmond-based academy.

“It’s actually pretty nice as it’s always a mix of different girls,” said Reid. “I have played with some REX (Regional Excel Centre) players and now this year there are some from SFU who play NCAA. It’s nice to get a mixture of players and just see the different styles of play.”

Her transition to the Rovers program is seamless. Regular training sessions are held at King George Park and the team plays about 10 games throughout the Pacific Northwest until early July. Among the dates is the Rovers hosting the Thunderbirds on Wednesday (7 p.m.) at Minoru Park.

“The TSS style is pretty much the same as Laurier so it’s beneficial to me,” continued the McMath graduate. “I do think it’s really important. It adds to everything I have been working on at Laurier and adds to my skill set.”

Reid came through Richmond Girls Soccer then spent some time in the B.C. Premier League with Coastal FC. When that team folded in her Grade 11 year she was at a bit of a cross-roads but still wanted take her career to the post-secondary level. That’s when she joined the TSS Academy and the path to Laurier fell into place.

Technical director Brendan Quarry already had a good relationship with Laurier coach Barry McLean that has resulted in a number of players landing at the Waterloo campus. Reid was always intrigued with the idea of leaving home for school and made a recruitment trip back east after McLean had seen a highlight package.

It’s been an experience that has been better than even she expected.

Reid immediately stepped into the starting line-up as a defender in the fall of 2016 and has been a fixture since, earning Ontario All-Conference honours. Off the field she is majoring in psychology and lives with a couple of teammates about a 10-minute walk from campus.

“I just want it to slow down,” Reid laughed. “It’s been a really big part of my life and Laurier is now part of who I am. I have really got used to it and this was definitely my best year in terms of soccer and school.

“I wanted to stay in Canada and wanted to move away. Brendan helped me out a lot. Barry told me that he does not have a program where just the upper years play which I know happens at a lot of Canadian schools. I wasn’t really sure but TSS girls that went there said they have been starting since their first year. I was little scared my first game but worked through my nerves.”

When Reid is not on the field she is working this summer for the Vancouver School Board in the material services department which somewhat provides a cross-training opportunity with plenty of moving and lifting.

She will head back to Waterloo in early August for training camp with the long term outlook of eventually staying in BC, at least so she thinks.

“I’m going to see how year four goes with schooling then make a decision (on coming back for fifth-year of eligibility). I know I will need more schooling (beyond her degree) and the plan was to come home and work for a year. But there are also more options in Ontario,” she smiled.