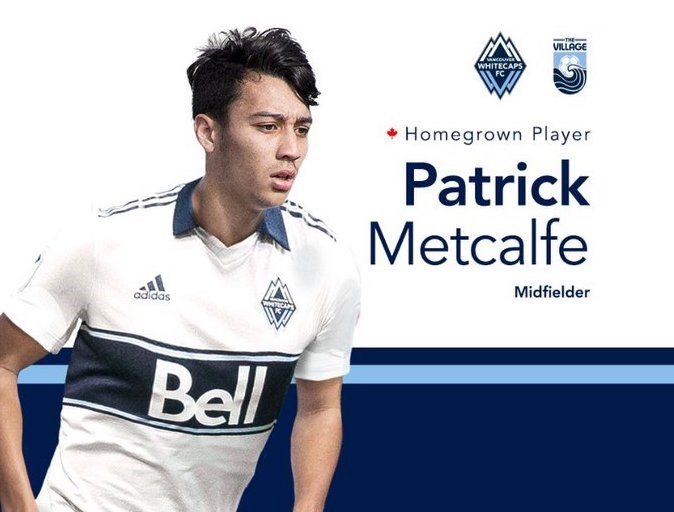 Patrick Metcalfe’s soccer talent and perseverance has paid off in a big way.

Vancouver Whitecaps FC announced on Thursday that the club has signed Development Squad central midfielder and Academy product from Richmond to an MLS Homegrown contract.

Metcalfe, along with Gianfranco Facchineri, become the 20th and 21st Whitecaps FC Academy products to sign an MLS Homegrown contract with the club, joining Thomas Hasal and Georges Mukumbilwa as Development Squad players who have moved up to the first team in the last year.

“This has been something I have been working towards my whole life,” said Metcalfe. “I would like to thank my parents and my brother for the support that they have always given me, and all the coaches along the way who have had a great impact in helping me earn this opportunity.”

“Patrick is a great example for all young players,” added Whitecaps FC head coach Marc Dos Santos. “He is always committed, always ready to train, he can play in all the three spots in the midfield and can also fill in as a centre back if needed. From what I have seen since I’ve joined the club, Patrick deserves this contract and we want to give him the opportunity to continue to grow.”


Metcalfe, 21, originally joined the Whitecaps FC Academy in March of 2016. During his two seasons playing in the Development Academy league, he started 35 of his 46 appearances with three goals, including a start in the 2016 U-18 Academy Championship final.
Following his time in the academy, Metcalfe was signed to a United Soccer League (USL) contract with former side Whitecaps FC 2 (WFC2). In his lone 2017 season, he would make two starts in four appearances. He moved up to the Development Squad in 2019, impressing against strong competition including during trips to England, South Korea and Mexico.

Metcalfe also played for the UBC Thunderbirds in 2017, leading the school to the Canada West championship. In the summer of 2018, the midfielder played USL League two with TSS Rovers, making 10 appearances.
Prior to joining the Whitecaps FC Academy, Metcalfe played for Fusion FC from U-14 to U-18 in the EA SPORTS BC Soccer Premier League (BCSPL) and was voted MVP at the U-17 level and named captain at the U-18 level. From U-7 to U-14, Metcalfe played with Richmond FC, including winning a BC Soccer provincial championship at the U-13 level.
At the provincial level, the Lower Mainland product was selected to the BC Soccer Provincial Team Program from U-13 to U-15. In November of 2013, he trained with youth teams at German clubs FC Nurnberg and SpVgg Unterhaching.