Patrick Metcalfe will be in action on Saturday at Hugh Boyd as U18 Whitecaps take on Seattle
Apr 7, 2016 9:07 PM By: Mark Booth 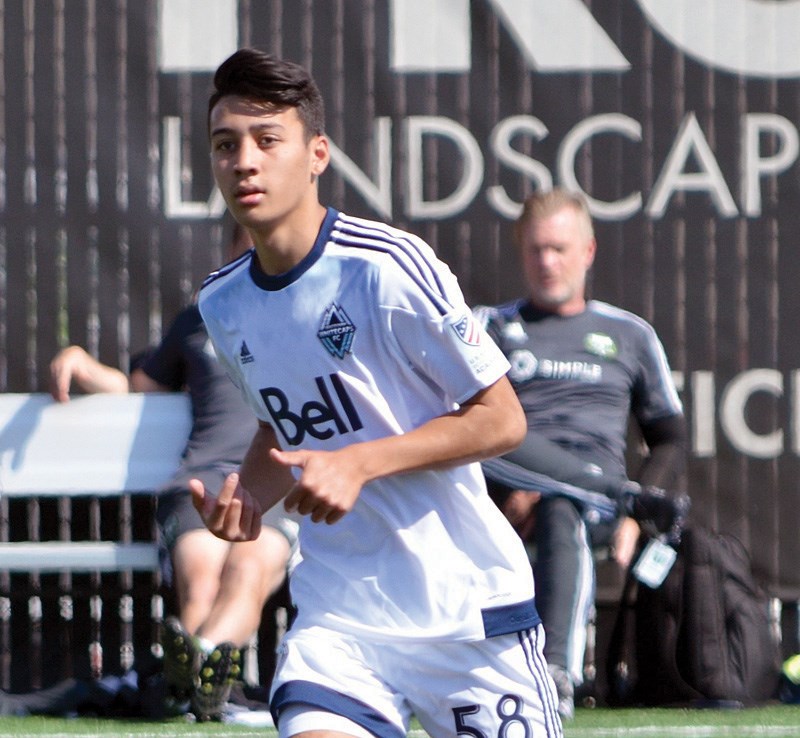 Patrick Metcalfe in action with the Whitecaps U18 team in Portland last weekend.

Patrick Metcalfe will be back in familiar territory Saturday as the newest member of the Whitecaps Residency U18 team.
The Richmond Youth Soccer product was recently signed for the balance of the United States Soccer Academy Development League (USSADL) and potentially beyond. He is one of 16 1998-born players on the roster that also features five more from the 1997 age group and talent from across the country.
The Whitecaps will be at Hugh Boyd to take on the U18 Seattle Sounders at 1 p.m. The regular season schedule continues until the end of May.
The sudden change of path in Metcalfe’s soccer career came after a successful trial last month. He was in the midst of his fifth and final season with Fusion F.C.— the Richmond/Vancouver hosted club in the B.C. Premier Soccer League and had already made a verbal commitment to join the UBC Thunderbirds next fall.
He has always been among the top players in the province for his age group and that’s reflected in being selected three consecutive years for the provincial select program. However, it was his switch from fullback to centre midfield which eventually got the attention of the Whitecaps’ scouting staff.
He had three training sessions to show he belonged. For a player seeking to taking his career as far as it could go, it was an opportunity of a lifetime.
“There was definitely a bit of pressure to show what I could do,” chuckled the Grade 12 student at Vancouver College. “I just said to myself to keep it simple and do what I normally would do. I also knew they would be watching me closely to see how nervous I would be in that environment.”
Metcalfe got a hint things were going well when he was asked after the second session if his school would be able to accommodate the early afternoon weekday training schedule. By the final practice, he sat down with the entire coaching staff and was offered a spot in the all-expenses paid program.
Typically, Whitecaps Residency players must attend Burnaby Central Secondary School which is near the training grounds and offers a flexible schedule. Since it’s so late in the school year, Metcalfe will get to stay and graduate at VC, thanks to the support of his father who picks him up at 1 p.m. each day for the trek to Burnaby.
The USSADL does feature an extensive travel schedule. The Whitecaps were in Portland last weekend for just one game and still have a couple of trips to California next month, including a much-anticipated game at the StubHub Centre to take on the U18 LA Galaxy. Vancouver currently owns a 13-1-10 record and trail first place Sacramento FC by just one point in the Northwest Division with a playoff spot comfortably in hand.
How Metcalfe performs over the next couple of months will determine the next step with the MLS club. There are basically three options — remain with the U18 team into the 2016-17 USSADL season, sign a professional contract with the Whitecaps FC2 USL team or be released.
That decision will also determine his status at UBC where he has also been accepted into the Arts program.
“Getting offered a pro contract is definitely the goal,” Metcalfe added. “Before Whitecaps FC2 it was just too big of jump for many from a physical standpoint to go from U18 Residency to the MLS. Now there is at least another development stage.
“Whether I can be with the Whitecaps and still go to UBC part-time I’m not sure about right now. I am willing to just focus on soccer for one year if that is what it takes.”
It’s a potential tough decision Metcalfe would be thrilled to make.