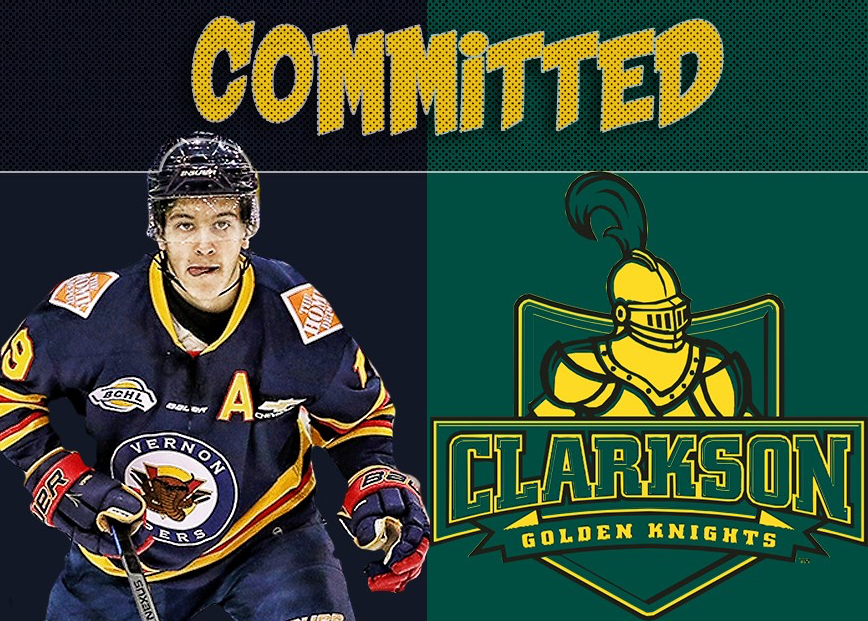 A Richmond blueliner is taking his hockey career to the NCAA Division One level in New York.

Trey Taylor has announced he has committed to the the Clarkson University Golden Knights for the 2020-21 season. The 17-year-old Seafair Minor Hockey product is in his second season with the BC Hockey League’s Vernon Vipers, serving as an alternative captain.

The Golden Knights are part of the East Coast Athletic Conference and are currently ranked seventh in the nation with a 16-5-2 overall record. They have advanced to the national playoffs the past two seasons. Clarkson University is located in Potsdam, NY and the team plays in Cheel Arena with a capacity of 3,000.

“I really like the small school feeling and that hockey is the number 1 sport on campus,” says Taylor.  “I was looking for a hockey school and I got one which I’m really excited about.”

He adds he is excited for his future as a Golden Knight, but is looking forward to the stretch run for the Vipers who currently sit third in the BCHL Interior Division with a 24-18-2-1-0 record.

Last week, Taylor was ranked 189th among North American skaters in the NHL Central Scouting Bureau’s Mid-Season Rankings for the 2020 Entry Draft. The 6-foot-2 blueliner has six goals and 21 assists in 96 regular season games over the two seasons.

His older brother Ty starred in goal for the Vipers before taking his career to the University of New Hampshire where he is currently in his sophomore season and has a 6-1-0 record to date.

The 20-year-old was drafted in the seventh round of the 2018 NHL Entry Draft by Tampa Bay. He was also named the BCHL’s top goalie that year.