Kajaks' Bradley on the fast track to success 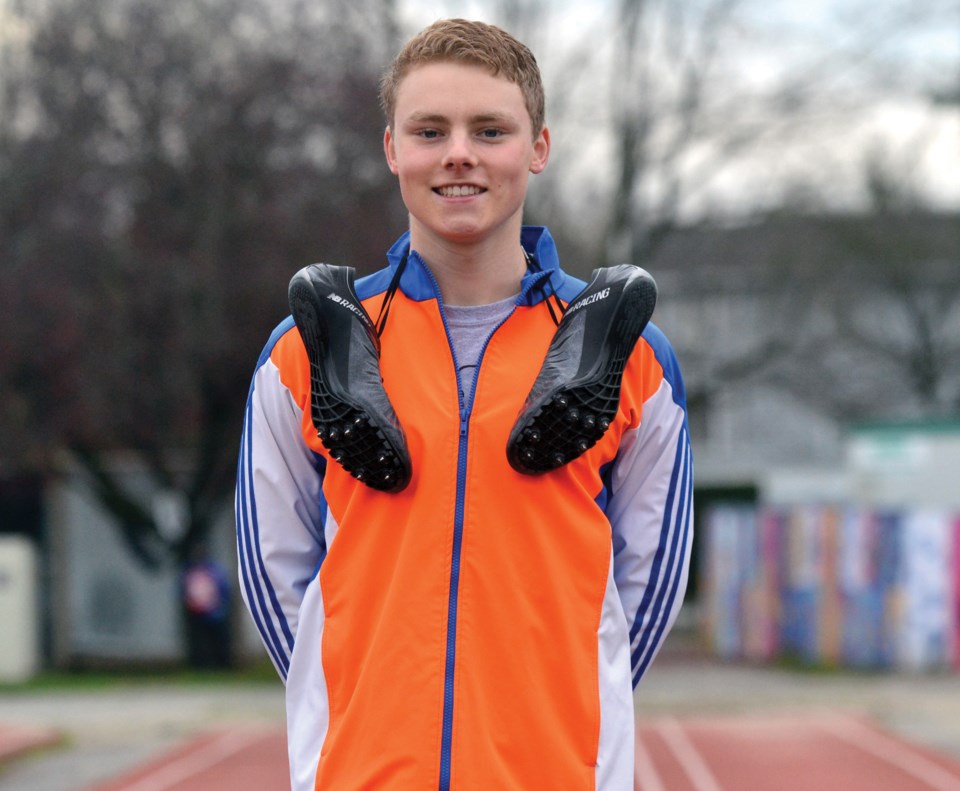 Add another name to the list of up-and-coming athletes who were influenced by Lee Hunter’s volunteer coaching work and passion for track and field.
It was during Carson Bradley’s time as a student at Dixon Elementary school when the longtime teacher piqued his interest.
“I was trying to find a sport that was the right fit me. I tried soccer and hockey. Mr. Hunter recommended I do track and I liked it,” recalled Bradley, now a Grade 10 student at RA McMath.
It was Hunter who also encouraged Camryn Rogers to give track and field a try. She recently signed her National Letter of Intent to attend the University of California Berkeley on a full-ride scholarship. Now, Bradley is busy establishing himself as one of the young names to watch in the province.
The Richmond Kajaks member is coming off an impressive 2016 season that saw him win three gold medals at the B.C. Summer Games — the 200 and 300 metres, along with the 4x400 relay.
He also posted the fastest times in B.C. for his age group in the 100, 200 and 300 metre events. The latter ranks second all-time.
At the Canadian Championships, he was fourth in the 300 metre event and a member of B.C.’s bronze medal relay teams. He also teamed up with his McMath classmates to win the junior boys 4x100 event at the B.C. High School Championships.
“I was doing well that first year but didn’t win a lot of races, until I got to the (B.C. Elementary Schools Track and Field Championships),” recalled Bradley of his Grade 6 season. “My first gold medal came in the 100 metres and it was totally unexpected. The school had an assembly and it was a great feeling. It was really motivating.”
By the following year, Bradley was a member of the Kajaks’ high school training group and he was winning on a regular basis. The highlight was the 300 metres race at provincials. He broke the B.C. record and realized the sprint endurance race, that would eventually evolve to 400 metres, was his speciality.
“I still remember my first (300) race at UBC. I realized near the end of it I still could go faster and ended up winning it. My 100 metre times are still impressive but not like the 300.”
Bradley’s passion and drive to get better has him training six days a week during the season, including four on track sessions. He works with longtime Kajaks coach Byron Jack and Surrey-based Robert Esmie, a member of Canada’s 1996 gold medal 4x100 relay team.
He has set some ambitious goals already for the 2017 season. They include representing Canada at the IAAF World Youth Championships in Kenya and the Youth Commonwealth Games in the Bahamas. A top five in the 400 metres at nationals could land him a spot on the relay teams.
Bradley also has his eye on winning three gold at the high school provincials, including the 400 and 200 metre events.
The long term objective is to follow Rogers and take his career to a university program. That’s why school remains his top priority.
“Track is enjoyable but school always goes before it,” Bradley added. “Where ever track takes me, I’m willing to go.