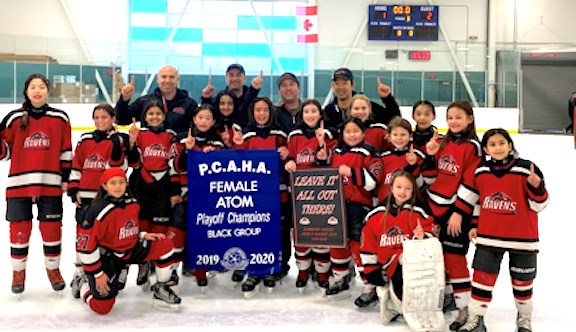 The Richmond Atom C1 Ravens captured their PCAHA Playoff Group with an exciting 2-1 win over Surrey.submitted

The Ravens and Falcons had both gone undefeated in regular season play — including a pair of ties in head-to-head battles — so it was only fitting that they would meet in the playoff final after round-robin play.

Richmond got off to an early lead less than a minute into the game on a goal by Zinnia Lin — assisted by Nadia Lundie and Kaiya Uppal.  The Falcons’ Gabriella Lee then tied it up later in the first period.

The eventual game winner was scored by Kira Bui, on a set-up from Anna Cubberley, with five minutes to go in the second.

Both teams had opportunities to score throughout the rest of the game but the stellar play of goaltender Hana Nishi and defensemen Juliana Bollo, Peyton Burns, Adelise Cyr, Anjali Purewal, and Reese Sangha maintained the Ravens’ lead until the final buzzer.

In addition to those players who had scored or assisted on the two goals, the team was aided by the strong two-way play of forwards Quinn Cyr, Nava David, Adrianna Jeske and Carol Zhang.

For the Ravens coaching staff –head coach Jesse Cubberley and assistants Martin Bollo, Adam Cyr, Mark David, and Bobby Nish, the banner win was a positive reflection of the team motto: “Leave It All Out There!”

The team manager is Anne Jeske.