A rollercoaster month of emotions for Richmond's Hirayama

From a memorable all-star performance and bronze medal at BC Place to seeing his Olympic dream being put on hold for a year
Mar 31, 2020 1:30 PM By: Mark Booth 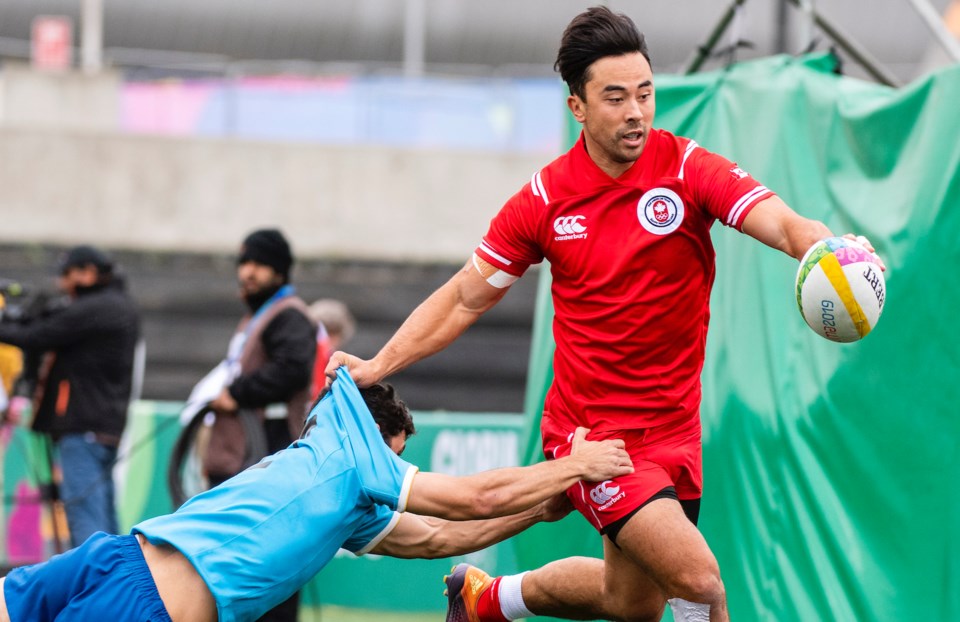 Just over three weeks ago Nathan Hirayama captained the hosts to a bronze medal at the HSBC Canada Rugby Sevens at BC Place Stadium. Since then the Richmond native has seen the postponed of four upcoming World Series tournaments and the Olympic Games until 2021 due to COVID-19.CHRISTOPHER MORRIS/COC

A little over three weeks ago Nate Hirayama was soaking in one of the highlights of his career — captaining the host country to its first-ever podium finish at the HSBC Canada Rugby Sevens in front of nearly 40,000 cheering fans at BC Place Stadium. Now he safely waits at his Victoria home wondering when he will be back on the field again.

COVID-19 has postponed the four remaining tournaments on the World Series schedule in London, Paris, Singapore and Hong Kong. Even bigger, the Summer Olympic Games have been pushed back to 2021 with the International Olympic Committee announcing the new dates (July 23 to Aug. 8) on Monday.

It’s almost hard to imagine the Vancouver tournament was such a short time ago given where the world is today.

“It’s crazy. Obviously we knew about COVID-19 and we talked about it but cancelling the tournament wasn’t even in question at that time. I didn’t even think about it,”recalled Hirayama. “Then a couple of days later (NBA player) Rudy Gobert tested positive and that’s when things kind of blew up.

“We were supposed to have been back on the field that Friday and it elevated even further. Training got cancelled. At that time we thought if (the Vancouver) tournament was held a weekend later it might not have even happened which would have been a shame.”

The Richmond native would soon learn the Canadian Olympic Committee would not be sending a team to Tokyo this summer. Fortunately, the Games were postponed 48 hours later.

“It seems silly for us to be worrying about playing a sport right now,” Hirayama continued. “Obviously a lot of us have sacrificed a lot of time and stuff for the Olympics and it was very, very important. It is my life and it is a lot of our lives but certainly there are a lot more important things going on right now in the world that should take precedent.”

Getting the opportunity to represent his country at an Olympic Games has provided Hirayama with motivation for much of his time with the national team program.

He recalls a decade ago when the process began of rugby sevens becoming an Olympic sport. Canada then missed out on a berth when it debuted at the 2016 Games in Rio.

“Some people wanted to go overseas and play professionally but it has kind of been my goal. Just how cool it would be to play rugby at the Olympics,” said the McRoberts graduate.

“There was a big group of us that stuck together for four or five years to hopefully achieve that goal. To not do it and just come (one game) short of going to Rio was heartbreaking. That being said who knows what would have happened the last four years had we gone there. Maybe some guys would have stopped playing after that Olympics.

“There’s a silver lining there. We have had some amazing accomplishments (like winning the Singapore tournament in 2017). Some of my most memorable things personally that I will always look back have happened over the last few years.”

The Olympics being pushed back doesn’t change Hirayama’s career outlook.

At 32, his game has never been better — earning all-tournament team honours in Vancouver. He attends regular work outs at the Rugby Canada training centre in nearby Langford with the same passion as his teenage days with the Richmond Rugby Club.

Once normality returns, he is looking at what could be an extended World Series schedule with the four postponed tournaments played in the fall before jumping into the 2020-21 season next December in Dubai and Capetown.

“I was just going to re-evaluate everything (if the Olympics did take place). This kind of makes my decision for me,” added Hirayama. “Just push it back and hopefully everything works out, not just for the Olympics, but for the world, first and foremost.”