The Keltic development on No. 3 Road will provide housing for women fleeing abuse and single mothers
Apr 22, 2021 9:03 AM By: Maria Rantanen 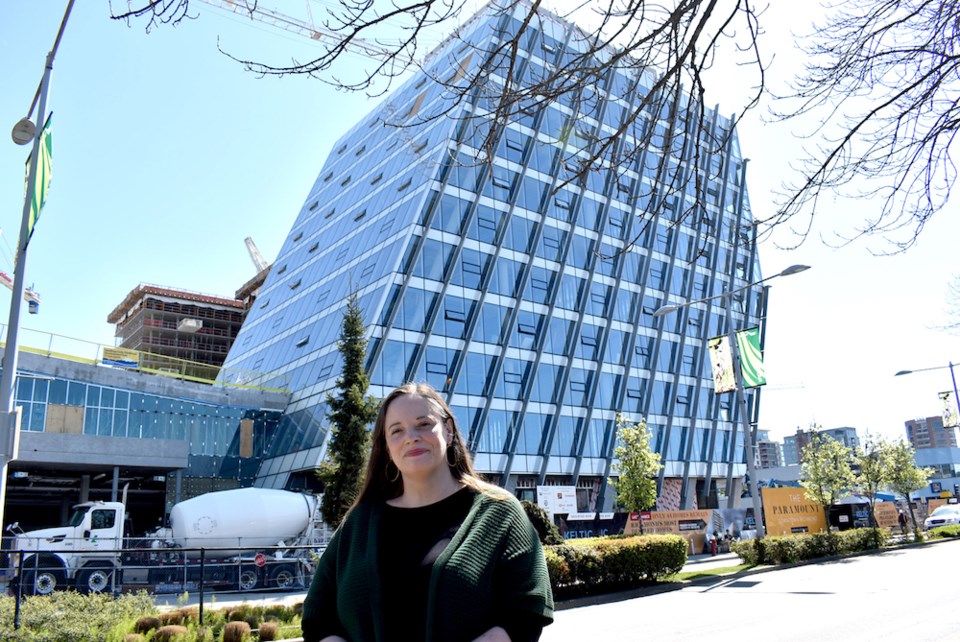 Lisa Rupert, director of housing and violence prevention with the YWCA, shows the building that will include 27 affordable rental units for women.Maria Rantanen

Twenty-seven affordable rental homes in the heart of the city will be available in November for single mothers, women fleeing abuse and women over the age of 55.

The YWCA has been looking for an opportunity to create housing for women in Richmond for a long time and the new Keltic Development, just steps away from the Brighouse Canada Line Station, offered that opportunity, explained Lisa Rupert, director of housing and violence prevention with the YWCA.

Fourteen of the units are meant for single mothers and their children, and the other 13 will be for either single women 55 years and older or women who are leaving abusive relationships.

This is the first YWCA project in Richmond, which is “so in need of affordable housing,” Rupert said. She is particularly happy about the central location by the Canada Line station.

“I can’t think of a better location for people who can’t afford a car (and) who need mobility,” she added.

Not only will single mothers and their children get stable housing, there will be units available for women leaving abusive relationships.

The YWCA has a long history of working with women fleeing abuse, Rupert explained. In 1979, they opened the first second-stage housing for women who’d experienced domestic violence in Canada.

When housing isn’t available to women leaving a violent relationship, they often have no choice but to go back to their abusive partners, Rupert explained.

“(Housing) is key to them being able to leave — and for their children not to witness or experience violence and being able to grow up in a healthy situation and then, in turn, be healthy in their own relationships,” Rupert said.

Richmond is in the top 10 least affordable rental markets in Canada, Rupert said, so it has been a top priority for the YWCA.

When filling the 27 units, they will prioritize women who are connected to Richmond.

“That is our commitment always for housing we’re building in communities — that we are prioritizing people who already live, work and go to school in those communities,” Rupert said.

Given the high cost of rental in Metro Vancouver, the lack of affordable housing is forcing single parents to live farther and farther away, exacerbating commute times and costs, Rupert explained.

The building includes a childcare centre, a library, meeting rooms, a gym and wellness centre as well as an outdoor area for residents.

The $5.7 million project was partially funded by a government grant of $2.7 million.

While the project is currently under construction on No. 3 Road and will be completed by November, the YWCA has raised 64 per cent of the cost for the 27 units, but still needs to raise $2.1 million for the project. Rupert encouraged anyone who can donate to go to ywcavan.org.

“We really depend on the generosity of our donors,” she said.