The suites for the city's homeless population have faced a contentious journey to completion.
Apr 12, 2019 1:30 PM By: Alyse Kotyk & Megan Devlin 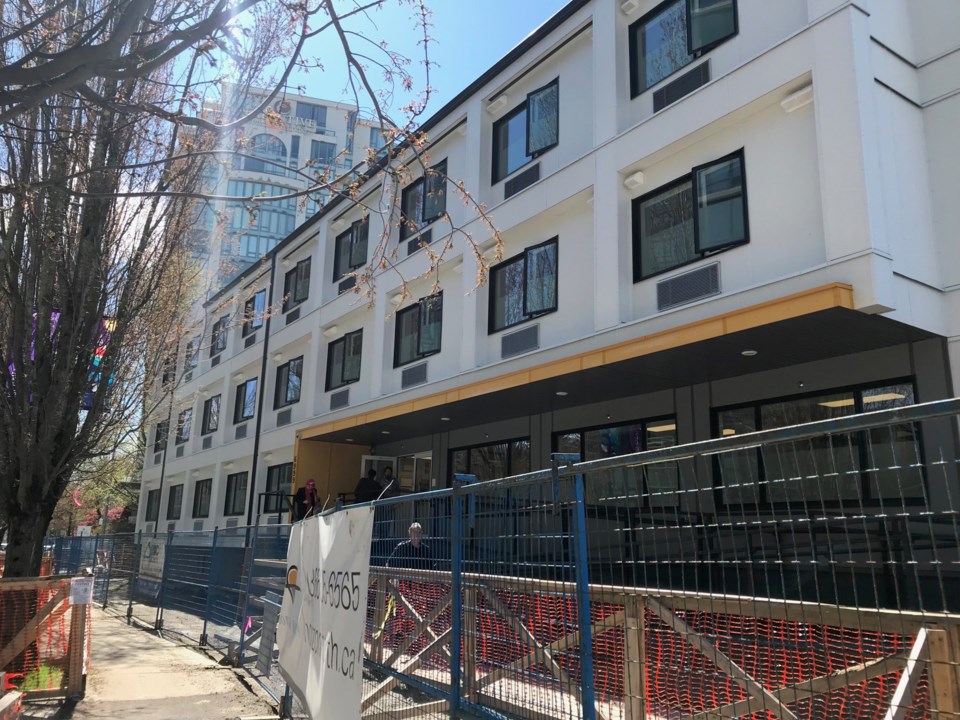 Last May, hundreds of City Centre residents came out to protest a plan to build an apartment complex intended to house a portion of Richmond’s homeless.

Friday, that same complex opened to celebration, with even one of its most ardent opponents saying he has hope the project will work.

Each unit has a kitchenette and washroom, and four of the units are designed for people with disabilities. The ground floor has a commercial-grade kitchen, common dining area, laundry facilities and support service rooms.

Coun. Alexa Loo, standing in for Mayor Malcolm Brodie, said "you can never help anyone if you reject them," during her opening ceremony speech.

"The entire community will benefit from people moving off the street and into housing,” she said.

Richmond city council approved the development of the 40 temporary modular housing units last May, after 10 hours of dialogue, which spanned two contentious meetings heard thoughts and concerns from approximately 80 delegations.

The site’s preparation the vacant lot that residents were using as an off-leash dog park also took place earlier this year.

Ivan Pak, an outspoken opponent of  the temporary modular housing project via 7300 Group (named after the address that was first identified for the project, before the city changed the address to Alderbridge to reflect its orientation), attended the opening as well.

He was pleased members of RainCity Housing and Support Society, which will operate the building, reached out to him to discuss his concerns. He said that gives him hope that the project will work.

“It's not my intention not to take care of the vulnerable peoples,” he told the Richmond News. “I'm still in question about (whether) this is the right location. But the decision has been made, and I would like to see how it goes.”

He added that he thinks Richmond, in general, needs more long-term social housing.

Yvonne Bell, a lifetime Richmond resident, also came out to watch the opening proceedings during a break from work.

“I'm so thankful this finally got built for the people that really need it,” she said.

"We are looking forward to continuing our work in Richmond and are grateful for the support and warm welcome we have received from the community over this past year," said Catharine Hume, co-executive director, RainCity Housing in a news release.

People will begin to move into the building starting April 23. Three people will move in per day until all units are occupied.

RainCity received 80 applications for the 40 spots in the building.

Some shelters in Metro Vancouver ban drugs, to keep the space substance-free for those who don’t use and those who are recovering. But that can discourage people who do use drugs from sleeping in a bed, since they’ll have to choose between going through withdrawal versus sleeping outside.

RainCity has a harm reduction policy, it won’t reprimand residents for using drugs in their own suites.  However, drugs and paraphernalia will not be allowed in hallways or common areas.

Guests are also forbidden from roaming unattended through the building and must be accompanied by a resident from the front door to their host’s suite.

The modular units are pet friendly, and staff said they’re planning to house one resident with a senior dog on the first floor to make it easier to care for his pet.

In 2017, the Homelessness Count estimated that at least 70 Richmond residents are homeless, which is an 84 per cent increase compared to 2014. However, according to Richmond-based service providers, the total number of homeless individuals exceeds 120.