Representatives of all three levels of government, public health, large employers and local post-secondary gave regular updates on how their organizations were changing because of the pandemic.
Mar 11, 2021 12:05 PM By: Maria Rantanen 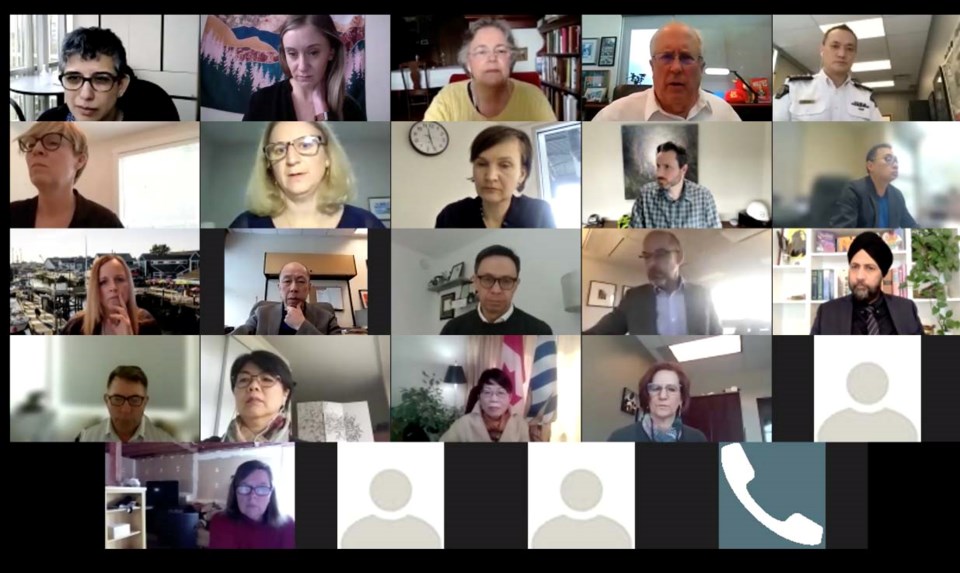 A task force met first weekly, then monthly, via Zoom to update the community on COVID-19 pandemic developments.Zoom screenshot

This Winston Churchill quote was notable — even prescient — a year ago at the launch of the Richmond COVID-19 Community Task Force, cited by then-president of the Richmond Chamber of Commerce, Fan Chun.

The task force came together as a conduit of information between representatives from all levels of government, public health and a wide swath of public and private agencies in Richmond.

Chun said, in 30 years of business, he has never seen such a level of motivation and participation, showing how critical it is to quickly disseminate information to Richmondites in this kind of situation.

As daily announcements were coming from the province last March and into April, restricting movement, shutting down public spheres like schools and restaurants, a group in Richmond was trying to figure out the best way to communicate among three levels of government, public agencies and business leaders.

This led to the birth of the Richmond COVID-19 Community Task Force, co-chaired by Chun and Richmond Mayor Malcolm Brodie in the first few uncertain days of the COVID-19 pandemic as things were rapidly evolving.

“It was unclear exactly what the impact was going to be to Richmondites, to their safety at home, at work, to their health,” said Shaena Furlong, currently the acting co-CEO of the chamber.

“You can tell how relevant this community task force continues to be simply because so many busy community leaders who are willing to give up their time for these meetings and we’re a year into the pandemic now,” Furlong added.

It’s been exactly a year today since the World Health Organization declared the COVID-19 pandemic, and, needless to say, it set in motion dramatic changes to how Richmondites, and people around the globe, go about their normal daily routines, from working to going to school to socializing.

But at centre stage was Dr. Meena Dawar, Richmond’s medical health officer, who would give updates on COVID-19 counts, public health measures and eventually vaccination rollouts.

The task force first “met” via Zoom on March 23, and the meetings continued weekly for the first few months.

One year later, as meetings have been reduced to one per month, participation continues as strong as it was from the beginning.

People in Richmond and beyond were feeling “unplugged from the world,” Chun said, as they worked from home and stayed in their isolated bubble.

Everyone was also looking for information about what was happening, Chun said.

The task force could link a cross-section of the Richmond community, bringing everyone into the “communication loop,” but also bringing a sense of togetherness as people were physically isolated and distanced.

“It (has served) to remind us that we are all in this together and also whatever hardship we are facing, it’s a temporary situation… and we will get out of this together,” Chun said.

For co-chair Malcolm Brodie, it was important to get the word out to the community via the media to stop the spread of conflicting information.

“(The goal was) just to get the word out straight and avoid conflicting information,” Brodie said.

“I think it found its place and I think it’s been a service,” he added.

Chun was especially impressed with the level of cooperation from people from all different agencies with different points of view.