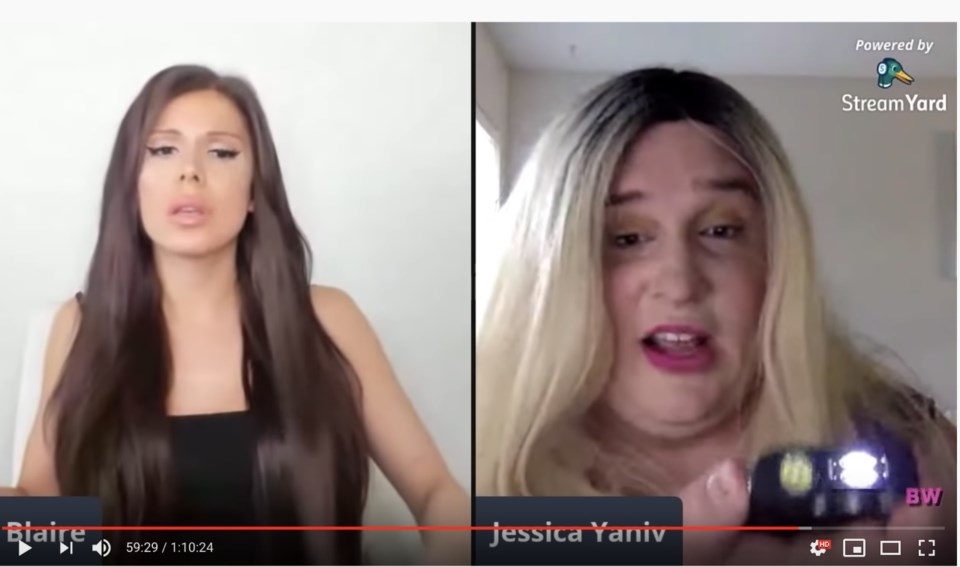 Surrey RCMP confirmed Thursday it has opened an investigation into an alleged assault by infamous self-described transgender activist Jessica Yaniv, who is already facing two criminal charges for possession of an unauthorized weapon.

Yaniv garnered international attention for her B.C. Human Rights Tribunal complaints against seven aestheticians who refused to wax her male genitals. The tribunal ruled October 22, 2019, that her complaints were unjustified and improperly motivated by financial gain and racial discrimination on her own part, given the vast majority of the aestheticians were ethnic minorities. She was fined $6,000 for improper conduct.

Despite this, an eighth genital waxing case involving the Langley resident and another aesthetician’s salon appears destined for another tribunal hearing.

There is an abundance of online videos with Yaniv and her critics arguing with one another or commentating back and forth.

Yaniv was in Surrey Provincial Court January 13 facing weapons charges after brandishing a conducted energy weapon on YouTube while debating YouTuber Blair White, who had been debating Yaniv last August upon news of Yaniv’s tribunal proceedings.

That day, Rebel News reporter Keean Bexte posted a video online showing Yaniv walking out of court. He asked Yaniv questions from a distance, and Yaniv responded by allegedly punching the reporter in the back of the head. The video shows Yaniv initiating physical contact.

It is that altercation that police say they are investigating, but due to privacy reasons, RCMP spokesperson Elenore Sturko said nothing more could be disclosed. Bexte claims Yaniv was arrested and released some time this week. Police have not confirmed any charges, although Bexte signalled a willingness to proceed.

Yaniv is due next in court on February 10. Yaniv and Bexte did not respond to Glacier Media requests for comment via Twitter.

Yaniv’s initial order for $500,000 in costs from the aestheticians was ruled to be “divorced from reality and reason.”

Yaniv, formerly Jonathan Yaniv, had taken them to the tribunal after claiming they discriminated against her for refusing her service. A previous complaint by Yaniv against two other waxers had also been dismissed. The difference this time around was that tribunal member and adjudicator Devin Cousineau determined there was a pattern of discrimination by Yaniv herself.

“I find that Ms. Yaniv’s predominant motive in filing her waxing complaints is not to prevent or remedy alleged discrimination, but to target small businesses for personal financial gain. In many of these complaints, she is also motivated to punish racialized and immigrant women based on her perception that certain ethnic groups, namely South Asian and Asian communities, are ‘taking over’ and advancing an agenda hostile to the interests of LGBTQ+ people.”

Yaniv’s motives were hence not consistent with the B.C. Human Rights Code, said Cousineau in her ruling.

Cousineau noted how the tribunal rarely makes the determination of improper motives, which results in dismissal.

Yaniv’s improper motives were determined because Yaniv used deception to manufacture some of the complaints, concluded Cousineau. Yaniv also sought to punish the respondents by filing numerous complaints. Yet she also stated a desire to resolve complaints for a financial settlement. Finally, she showed “animus toward certain racial, religious and cultural groups.”

Eight of the respondents Yaniv filed complaints against in both cases were non-white women, and typically working from home (two had to shut down because of the complaints, the tribunal heard).

“I found aspects of Ms. Yaniv’s testimony to be disingenuous and self‐serving. In cross‐examination, she was evasive and argumentative, and contradicted herself,” wrote Cousineau, noting Yaniv first claimed to have male genitals and then claimed later to be intersex with “other stuff.”