Two animal organizations are offering a $1,000 reward for identification and conviction of whoever’s responsible for a skinned beaver found dumped along Richmond’s West Dyke.
May 22, 2020 12:15 PM By: Alan Campbell 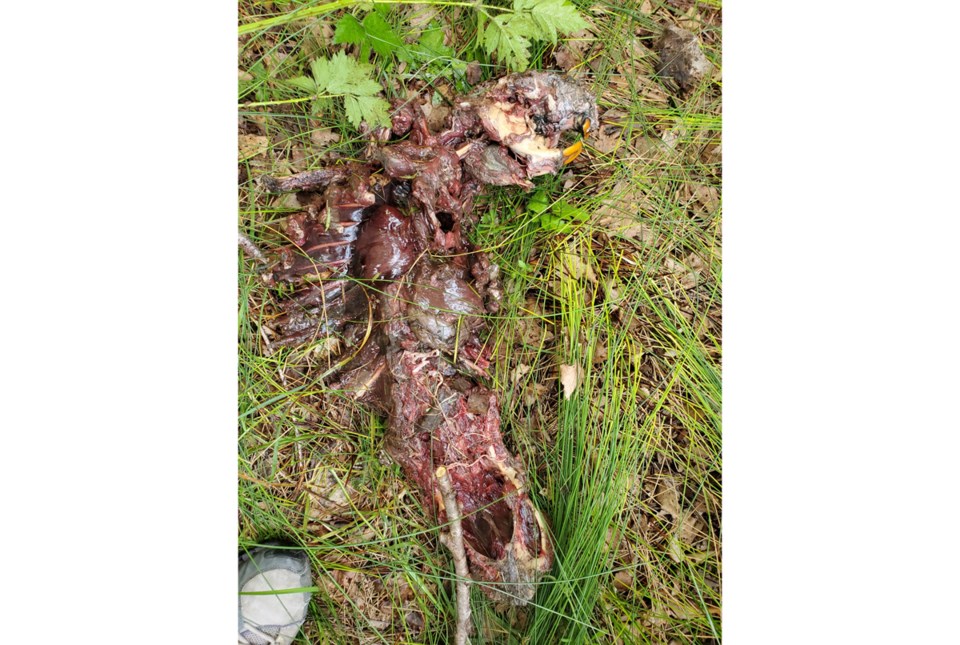 The skinned carcass of a beaver was found on the West Dike Trail. Photo submitted

Two animal organizations are offering a $1,000 reward for identification and conviction of whoever’s responsible for a skinned beaver found dumped along Richmond’s West Dyke.

Richmond resident Mandy Lichtmann discovered a skinned beaver carcass about 25 metres from where the City of Richmond had previously removed a beaver lodge.

“I was horrified to discover the carcass, particularly as two adult beavers and two kits haven’t been seen since the city removed the lodge,” said Lichtmann.

“The area where I found the beaver is off a walking path heavily used by families, children and people with pets who are out to enjoy Richmond’s natural beauty and wild inhabitants.”

The non-profit Fur-Bearers and a private donor to the Regional Animal Protection Society (RAPS) have each put up $500 for the reward.

The city told The Fur-Bearers and Lichtmann in an email that they have not trapped or contracted anyone to trap on the West Dyke.

It is not known if this was the location where the beaver was killed or trapped and if that was done legally, but the disposal of the body in such a way is unlawful.

Eyal Lichtmann, who is Mandy’s husband and CEO of RAPS, said that as an animal rescue group, RAPS is contracted by the city to provide humane care for wildlife, where applicable, and if injured to provide medical care.

“Justice must be done for this horrific action and perpetrators of such acts should know they will face consequences,” he said.

Clay Adams, spokesperson for the city, said staff came across the carcass this week while conducting maintenance and called the provincial Report All Poachers and Polluters program immediately.

“The City of Richmond is not actively trapping beavers. We are also not aware of any traps for beaver or other animals along Richmond's West Dyke,” said Adams in an email to the Richmond News.

“We encourage anyone who sees a trap to report it to the City's 24-hour dispatch line so we can take the appropriate steps to ensure that residents and wildlife are protected.

“Beavers can impact the City's drainage network and staff regularly conduct maintenance to remove the early stages of dams created by active beavers where possible in order to avoid localized flooding. Beavers are a reality of our local environment, and we do not condone illegal trapping or poaching.”

Lesley Fox, executive director of The Fur-Bearers, said they were “concerned about this situation” and are hoping someone in the community will know what happened and provide valuable insight to investigators.

“Anyone with information about this or other unlawful wildlife incidents should contact the BC Conservation Officer Service through their Report All Polluters and Poachers line. Tips and information can be submitted anonymously through the BCCOS’s online portal.”

All tips and information can be sent to the BC Conservation Officer Service’s RAPP line at 1-877-952-7277 or online (anonymously) at https://forms.gov.bc.ca/environment/rapp/.