Customers can use the license cancellation as proof of permanent closure when trying to get refunds or claim insurance.
Aug 21, 2018 12:00 PM By: Megan Devlin 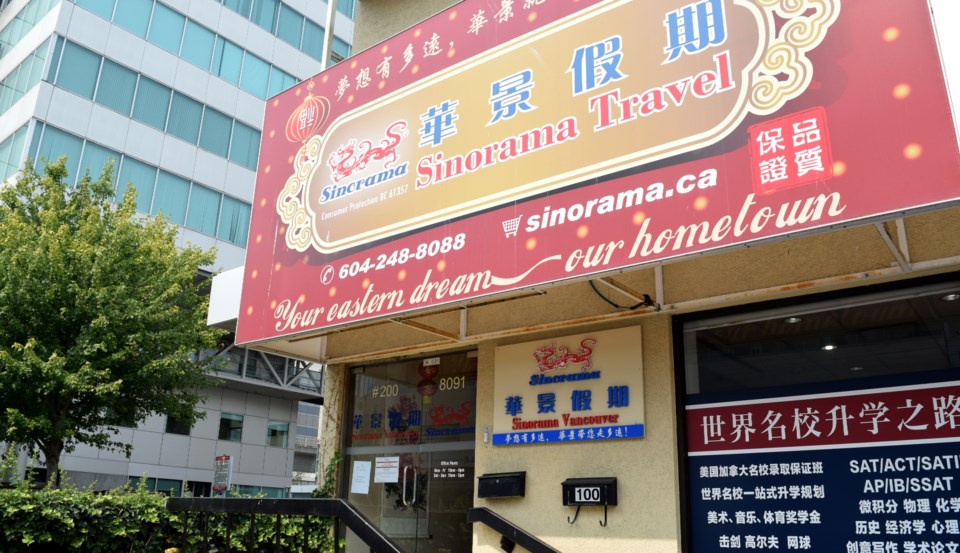 The glass door to Sinorama's office on Westminster Highway was locked, and a notice that the office space is for rent was posted next to the notice of license suspension.

Richmond travel agency Sinorama has had its license permanently cancelled after concerns it scrapped clients’ travel arrangements and failed to produce its financial records.

Consumer Protection BC, the provincial agency that licences travel agents, says Sinorama Travel Vancouver Inc. customers can use the license cancellation as proof that the business is permanently closed when trying to claim travel insurance or get credit card transactions reversed.

“Since the Aug. 9 decision to suspend the license, we have come to understand that Sinorama Travel has gone about cancelling travel arrangements for a large segment of consumers that booked … with them,” he wrote in the Aug. 20 notice of cancellation.

When Consumer Protection BC asked to see Sinorama’s financial, commercial and corporate transaction records, the company said it could not produce them.

Further, he wrote that Sinorama informed his office it no longer intended to do business in B.C.

Consumer Protection BC originally decided to inspect Sinorama after the Quebec licencing body failed to renew the license for Sinorama Vacances Inc. The companies were separate legal entities, but linked through ownership.

“When we did our own inspection what we found concerned us,” Tatiana Chabeaux-Smith, BC Consumer Protection spokesperson, told the Richmond News on Aug. 14.

Consumer Protection BC worried the low amount of working capital Sinorama had would affect its ability to pay for flights, hotels and tours to honour client bookings.

Barb Taylor thinks that might be what happened to her.

She lives in Langley, and booked a trip to Vietnam through the Richmond travel agent. She had just paid her final installment for her October trip days before Sinorama’s license was suspended.

“Why did you (Sinorama) collect my money on Friday when you knew you were in trouble?” she asked.

Taylor began independently confirming her travel bookings with airlines and hotels, as recommended by Consumer Protection BC.

She found her plane tickets to Vietnam had been purchased, but could not find ones for her internal Vietnam flights. As well, the hotel she called in Hanoi said it had no record of her reservation.

But the good news is Taylor’s credit card company said it would refund the services that Sinorama failed to book. She’s planning on taking the flight and booking her own hotels and tours.

“It’s all about the adventure,” she said.

Chabeaux-Smith said as many as 4,000 customers could be impacted. Consumer Protection BC has an online guide to help Sinorama customers investigate whether their travel was booked and navigate their next steps.