A group of Richmond residents is hoping a developer will consider preserving a swath of land in a proposed development in Capstan with several mature trees, saying they provide habitat for owls, hawks and other birds.
Nov 28, 2020 3:00 PM By: Maria Rantanen 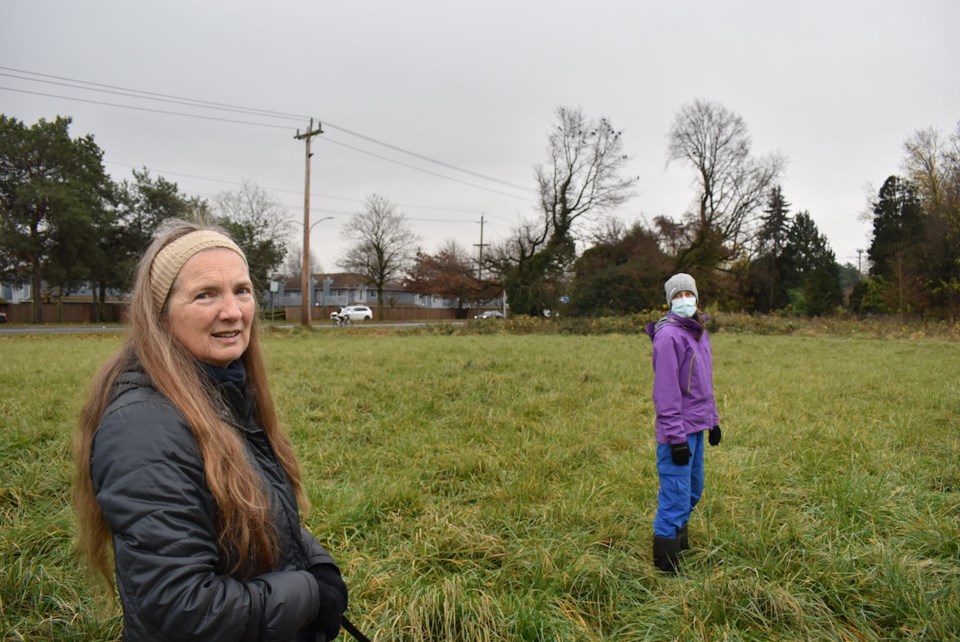 Sharon MacGougan (foreground) and Yvonne Bell both would like to see more nature preserved at a Capstan-area development.Maria Rantanen

A group of Richmond residents is hoping a developer will consider preserving a swath of land in a proposed development in Capstan with several mature trees, saying they provide habitat for owls, hawks and other birds.

When the rezoning application for Polygon development at Garden City and Cambie roads – which will eventually have more than 1,200 residential units - came to council for a public hearing, council sent it back to staff to look at the trees, review the proposed park location and possibly increase the number of market rental units.

According to the city, the developer is now looking at council’s referral and it’s expected back early in the new year.

Sharon MacGougan, president of the Garden City Conservation Society, is one Richmond resident worried about the loss of mature trees and the habitat it provides for birds.

The consolidated property currently comprises a large field, several residential properties with only one house left and 154 mature trees largely on the southeast corner of the lot where hawks and other birds can be seen nesting.

It’s this rectangular forested area the group is trying to preserve. A developer-created park, about an acre in size, is planned for the centre of the complex (as well as another half acre of public open space), but MacGougan said she doesn’t think it would replace the current natural habitat.

To the north and west of the property are dense residential developments.

The property is designated for density in the Official Community Plan, however.

The plan that was before council in October was to raze the properties to make way for the development – the developer would have to provide funds to double the number of trees in the city to compensate for the loss of the trees on this property.

Some of the soil from the hay field would be saved for the Garden City Lands.

The staff report notes the property is a barn owl and hawk hunting area. The developer has offered to enhance an off-site hunting habitat as well as a grasslands area at a cost of $205,000.

But MacGougan, who points out birds are in decline worldwide, questions whether having an area for these birds elsewhere is appropriate.

“How does the owl know to go to these two little strips?” she said, referring to proposed sites for enhancement.

When fully developed, the Polygon Talisman Park development will have 1,226 residential units, including 150 affordable rentals and 65 market rentals.

“When we create these dead zones, all of these birds leave and where do they go?” MacGougan said.

While a demolition permit has been issued for the only house left on the property, Jim Wright and John Roston have advocated for saving the house and possibly turning it into a wildlife interpretation centre or a caretaker’s residence. (Roston has also been pushing for more rental units – he’d like to see 75 per cent rental - and that is part of what council asked the developer to reconsider

The house, at 8791 Cambie Rd., was built in 1930 and has been rented by the same person for 44 years. It’s located on the rectangular treed area the group is trying to save.

Yvonne Bell, who attends the United Church next to the proposed development, said she laments the loss of heritage homes in Richmond.

Bell explained one doesn’t see old houses being saved around Richmond as heritage houses with the exception of one at Garden City Community Park, the caretaker’s residence that was moved there.

She would like to save the entire lot as an oasis in the densely populated area, saying areas like this should be part of the city’s climate action plan.

“When I take into consideration all the high-rises in the immediate area and all the acres of trees and fields and the heritage houses which have been mowed down to make way for this voracious development, I see nothing has been provided for the birds, wildlife, heritage of Richmond or the residents’ mental health,” she said.

But for MacGougan, the main goal is to save the trees and natural habitat.

“We want to be part of the solution to bring our birds back… and integrate our life with natural life,” MacGougan said.

Polygon didn’t return a media request from the Richmond News.