Sylvie Faucher says common sense needs to prevail over ICBC's use of the names on her birth certificate
Apr 28, 2021 3:14 PM By: Alan Campbell 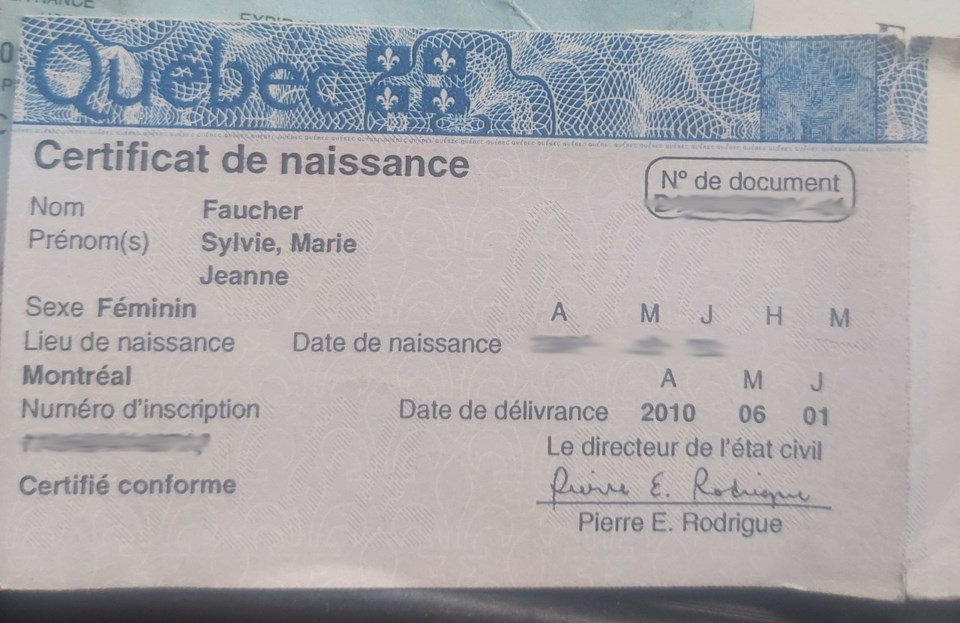 One wonders if former Prime Minister Jean Chrétien had ever moved to B.C., would he have had to jump through the ICBC identification hoops as fellow Quebecer Sylvie Faucher?

Suffice to say, Faucher, who moved to Richmond last summer, will not have ICBC on her Christmas card list after it used her birth certificate when creating her B.C. driving licence late last year.

Problem is, Faucher was born in the ‘60s in Quebec, when she says tradition meant many children were still being given two Catholic first names before the name they would ultimately use throughout their lives.

For example, Chrétien’s first two names are actually Joseph Jacques, while Faucher is officially “Marie Jeanne,” despite every single other document in her life – including her Canadian passport – naming her as “Sylvie.”

Now the former lawyer is stuck between a rock and a hard place, unable to get a BC Services Card in a name other than Marie Jeanne and with health issues piling up for her.

And she’s also worried about crossing the U.S. border in the future, with her passport and driving licence now not matching.

“I’ve used Sylvie throughout my entire life; this is completely ridiculous,” Faucher told the Richmond News.

“My legal name is Sylvie; it’s on all my documents, including my passport, my tax history, my lawyer’s certificate, my health records and my Quebec driver’s licence.

“Marie Jeanne is only on the birth certificate. It’s nonsense, a complete lack of common sense.

“Those are my Catholic first names, which applies to just about every Catholic girl’s first names in Quebec of my generation. If all the girls from my generation came to B.C. from Quebec, ICBC would have to name them all Marie and they would all have to go through this.”

Faucher has been told by ICBC that she would need to change her name “legally” to Sylvie in order for it to change the name on her driving licence.

“The passport, my tax records, my Quebec licence are all accepted legal forms of identification, that should be more than enough.”

Asked why she doesn’t just go ahead and get a BC Services Card in her birth name, Faucher said she could, but then neither her driving licence nor health card would match any other official document in her life.

A spokesperson for ICBC told the News that it issues photo cards in a “person’s foundation name from a Canadian birth certificate or Canadian Citizenship and Immigration documents” in order to protect B.C. residents against identity fraud.

The spokesperson said ICBC does accept the Canadian passport as identification – but only if it’s issued in a “foundation name,” such as a Canadian birth certificate.

And because passports can be obtained in Canada in a preferred, non-foundation name, ICBC considers it as a “travel document” only.

In the case of Faucher, ICBC said she has two options - contact the Québec government about re-issuing her birth certificate in her preferred name or “complete a legal name change.”

Faucher, however, said she’s prepared to dig in, adding that she’s determined not to change her name as ICBC suggests.

“I’m going to put pressure on ICBC to refer the case to their legal department, so we can talk lawyer to lawyer,” added Faucher.

“I also want this to go in front of a judge; I’m just trying to find out which court in B.C. this will go to.”

These are some of the custom licence plates ICBC rejected
Dec 31, 2020 9:26 AM
Comments