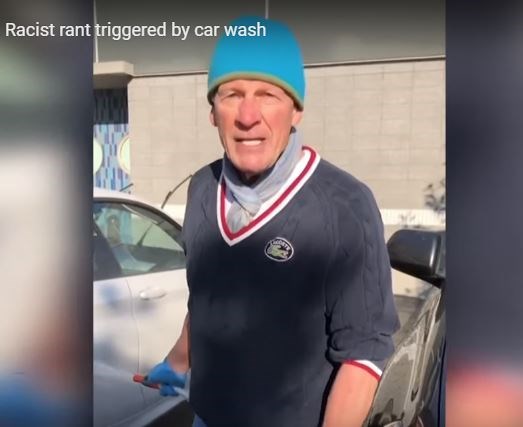 The video shows this man telling the filmer to "go back to China." YouTube screenshot

Richmond RCMP says it has not received a complaint into a racist rant on the weekend, caught on video and centering around a man washing a car.

A video circulating on social media on Saturday appears to show a Caucasian man in his 60s or 70s, washing his car in a strata complex, understood to be near Cambie and No. 4 roads.

In the video, the man appears to be challenged by a woman for washing his car in a no-washing zone, sparking a string of racist comments about her being from China.

The woman contacted City TV about the incident, but asked not to be identified.

She was apparently meeting friends who live in the complex around 11 a.m. Saturday and got out of her car, hoping to capture the man’s licence plate with her phone so she could report it to strata.

The woman claimed she was sprayed by the man’s hose “quite threateningly.”

However, a spokesperson for Richmond RCMP said Monday that it had “not received a complaint” related to the video.

Another video of the same incident, understood to be filmed by the woman’s male friend, has since been removed from Facebook.

According to people commenting on that video, the same racist comments were heard being made by the car-washer.

However, there are direct references being made by the woman’s friend, throwing racist slurs back at the man washing the car.

According to HateCrimeBC.ca, In Canada, a “hate crime is defined as any criminal offense against a person, group or property that is motivated by hatred or prejudice towards an identifiable group.”