A recent study shows that many species in the Fraser River are under threat if status quo of development continues
Dec 12, 2020 5:34 PM By: Maria Rantanen 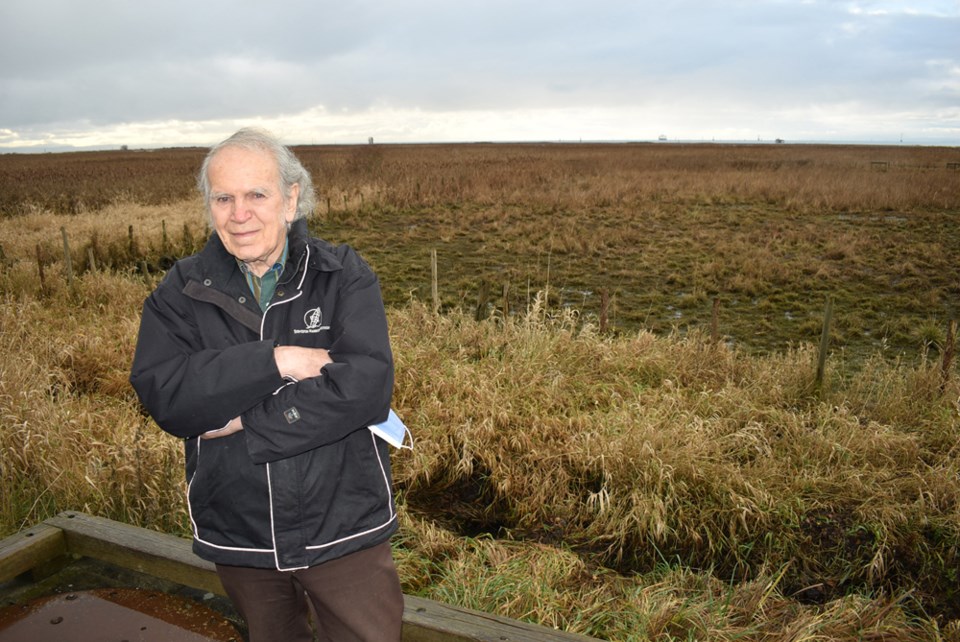 Fighting to protect the coastline started right at the front door of Richmond Coun. Harold Steves in December, 1968.

Steves had just been elected to council when a neighbour knocked on his door and asked him why there were orange ribbons outside along his fence line and continuing down the coast all the way to what is now Garry Point Park.

Apparently, Imperial Oil had acquired the area on the mudflats and was going to build a super tanker terminal right outside his home at the western terminus of Steveston Highway.

It took two years to fight the project, but the City of Richmond was able to stop the tanker terminal and the area was designated recreation and conservation by the GVRD, currently Metro Vancouver.

“In those days, the port couldn’t over-rule us – now they can and they do,” Steves said. “But in those days, what Richmond said in terms of its zonings and what Metro Vancouver said is what counted.”

When Steves was elected MLA a few years later, he introduced a private member’s bill to create a coastal zone act that would protect all the estuaries across the province.

Steves believes it would have become law – like the Agricultural Land Commission Act that protects farmland in B.C. – if the NDP had continued in power after its one term in the 1970s.

“It all started at this spot in 1968,” Steves said, pointing to the marshland beyond the west dike.

The Fraser River estuary is home to half of B.C.’s population but only 30 per cent of its natural habitat is currently intact, according to a recent study by the Raincoast Conservation Foundation.

The study by the Raincoast Conservation Foundation, a science-based non-profit, points to a need for management strategies and an over-arching governance structure to oversee development and habitat restoration. Currently, there are 64 government and First Nations authorities overseeing the Fraser River estuary’s resources.

In the summer, Richmond city council passed a motion, initiated by Steves, to write to the provincial government asking them to enact a coastal strategy and law to protect the coast, stop habitat loss and to complete a network of marine-protected areas to benefit biodiversity but also fisheries and the economy.

Richmond-Steveston MLA Kelly Greene was at that table as a city councillor when the motion passed, and last week, when she received her mandate letter as the new Parliamentary Secretary for Environment, there was a directive to support the Minister of State for Lands and Natural Resource Operations in developing “a new provincial coastal strategy to better protect coastal habitat while growing coastal economies.”

Greene said the idea is to have a framework to “grow our economy but ensure we are doing it in a way that’s sustainable so that future generations can also have a strong economy and depend on the ecology of our coastal communities.”

This will include reaching out to various communities to see what their priorities are, she said.

“For us, in Richmond the fisheries are really important as is tourism,” Greene added.

Creating the coastal strategy will be led by Nathan Cullen who was named the Minister of State for Lands and Natural Resource Operations.

Regulation of development along the Fraser River shorelines has been “piecemeal” and is causing the demise of the estuary and the salmon habitat, said Richmond City Coun. Carol Day.

While there have been several environmental reviews on the Fraser River, there are “constant battles” and arguments over turf on different development projects, for example, the jet fuel tank, opposed vociferously by Richmond council, Day said, adding a Fraser River management authority would oversee the entire estuary.

“The cumulative effect of all these projects wouldn’t be allowed to happen because you’d have an over-riding authority that knows exactly what should happen,” she said. “Because we don’t have that, we end up constantly with our underwear around our ankles trying to figure out what’s going on.”

“We need a full coastal zone act – it needs to have some teeth to it – a government act that protect the estuaries and require that the collective effect on estuaries would be considered before it was changed,” Steves said.

Seven years ago, the Harper Conservative government stopped funding FREMP, the Fraser River Estuary Management Program, which had expanded its mandate from coordinating activities along the Fraser River to include the Burrard Inlet as well.

FREMP established where industry could develop and where it couldn’t along the Fraser River as well as zones for habitat enhancement to replace lost habitat.

FREMP had red zones that couldn’t be developed because the habitat was too important.

FREMP linked federal and provincial agencies, port authorities (but not the Port of Vancouver), regional districts, municipalities and First Nations to coordinate decision-making on conservation and development to ensure there was a common approach to development and conservation.

Its activities included log management, dredging, habitat management and development both in urban areas and on the water.

The Raincoast Conservation Foundation came up with 10 management strategies to mitigate the impact on species in the Fraser River estuary – ranging from transportation regulation to public and private land management – and estimated it would cost $326 million to implement them all.

Implementing co-governance – with the 64 local authorities – would make the investment more efficient and increase the likelihood of these species surviving.

The researchers estimated the cost of a co-governance structure would be $55 million.

This means implementing all strategies and putting into a place co-governance would cost $15 million per year for 25 years, or $6 per person in the Lower Mainland area, the study concluded.

The Raincoast study, published in May, raised the alarm of 102 species at risk in the Fraser River estuary, including the southern resident killer whale, salmon and the western sandpiper, and claimed no action could result in the loss of two-thirds of this population.

The expansion of the Port of Vancouver’s Roberts Bank Terminal 2 – opposed by the majority of Richmond city council – is one of the projects that could jeopardize these species.

Experts ‘pessimistic’ on survival of species with status quo

Having an over-arching strategy to protect the Fraser River estuary would put green infrastructure to the forefront, explained Raincoast biologist Dave Scott, and that could help adapt to sea-level rise while still providing the needed ecosystem for species at risk.

An example he cites is leaving large marshes in front of dikes to absorb king tides or big coastal storms.

“A coordinated strategy on how we can protect our ecosystems while adapting to sea-level rise is definitely something municipalities are really going to struggle to do on their own,” Scott said, adding assistance from higher levels of government like the Department of Fisheries and Oceans could help them.

Experts are pessimistic about the resiliency of species and their ecosystem in the Fraser with the status quo, Scott said. What’s needed is an examination the state of development in each ecosystem, he added.

“In the Fraser, we really need to decide, are we going to continue with the status quo of development and lose these species or are we going to turn the tide and start to head in a positive direction,” Scott said. “It’s really time to focus on protecting and restoring that ecosystem.”

Richmond Olympian walking every day in January for Kidsport BC
Jan 19, 2021 3:23 PM
Comments