The city is trying to tackle birth tourism locally by shutting down businesses promoting it while pushing the federal government to ban it outright. In the meantime, the U.S.
Feb 4, 2020 12:03 PM By: Maria Rantanen 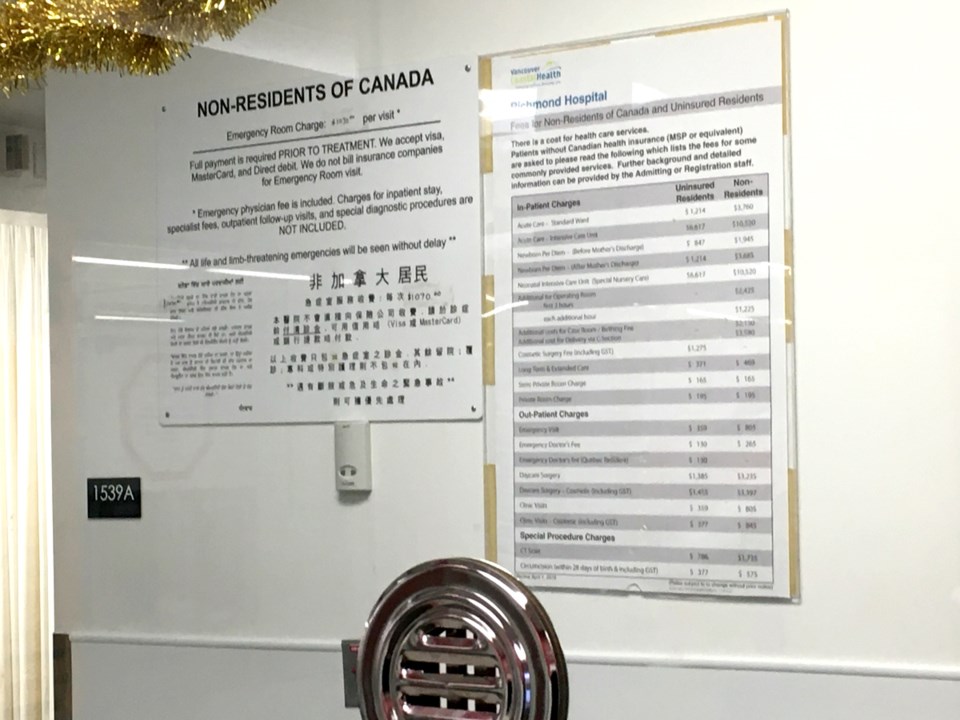 Costs for services for non-residents, including births, are listed at the Richmond Hospital's reception area.

The city is trying to tackle birth tourism locally by shutting down businesses promoting it while pushing the federal government to ban it outright.

In the meantime, the U.S. State Department recently put in rules that prohibit women who are pregnant from getting tourist visas to the U.S., something Richmond-Queensborough MLA Jas Johal praised.

“I don’t agree with a vast majority of things Trump says or does — in fact, he offends me in many cases — but the fact he’s dealing with this issue is a commentary on how far back Canada is that we’re not,” he said.

At Monday’s committee meeting, a motion by Coun. Carol Day to write to Marco Mendicino, the Minister of Immigration, Refugees and Citizenship, urging him to end birthright citizenship for non-Canadians was supported by almost all of council.

In an effort to combat birth tourism, Richmond city staff fine operators for any illegal activity they may be running, for example, tutoring, airport dropoff/pickup.

But because there is no business license for birth tourism, they can’t be shut down for advertising birth tourism services, explained Cecelia Achiam, general manager of community safety.

This last point was challenged by the mayor, Malcolm Brodie, at Monday’s committee meeting, and he asked staff to find out whether it is possible to shut them down based on the fact they are an illegal business.

“If they’re doing something that is unlicensed and not allowed, you’re telling me you can’t do anything about it – surely it’s operating a business without a license,” Brodie said.

Coun. Kelly Greene pointed out, North America is a desirable destination for birth tourists, she said, but this is something only the “ultra-rich” can do.

“It feels really unfair and it doesn’t feel right to shop for your citizenship,” Greene said.

Greene, however, criticized Johal for praising the U.S. government’s move to ban pregnant women from getting tourist visas, something Greene called “policing women” by profiling them if they’re pregnant when applying for a tourist visa.

Greene called this a “horrifying violation of human rights.”

She said she wants the letter to Mendicino worded saying Richmond wants to end a practise where people buy their citizenship, but “so that we’re never, ever in a situation where we’re policing women’s bodies.”

Greene also called for an amendment that talked about changes not affecting vulnerable and stateless people but this didn’t pass.

Greene pointed out that staffing at Richmond Hospital is based on census data, but this would not take into account the quarter of the total number of births that are to non-residents.

Coun. Bill McNulty advocated for the city to close as many loopholes as possible, but also suggested the accommodation rules need to be revisited to combat birth tourism.

The practise doesn’t fall under short-term rentals, rather the provincially regulated long-term rentals.

“I think there are many loopholes to be closed and I think the city can close some of them within our community,” he said.

This was reiterated by Coun. Harold Steves who suggested long-term rentals for birth tourism are actually turning homes into hotels.

Greene was the only councillor who voted against the motion.