The city estimates that around 180,000 snow geese called Richmond home last winter, up 40 per cent on last season and more than double from three years ago
Apr 14, 2021 7:01 AM By: Alan Campbell 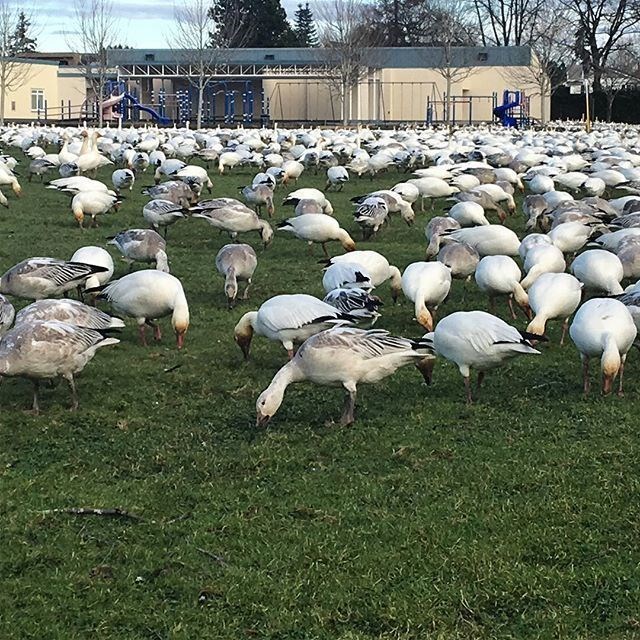 Snow geese tearing up Richmond's sports fields is not a new problem, but this year appears to have been the worst for a long timeRichmond News file photo

They may make for photo and video eye candy in the winter and early spring but a record-breaking number of snow geese visiting Richmond has decimated the city’s sports fields.

According to the City of Richmond, the 2020/2021 season has been one of the worst years so far for damage to sports fields due to the annual snow geese migration.

As opposed to Canada geese, which generally just eat the blades of grass and poop, their white counterparts also dig up the roots for food, causing thousands of dollars’ worth of damage.

Of course, this is far from a new problem in the city, which has invested in programs over the years to woo the snow geese south to grasslands in Delta and also deploy volunteer dog hazers to shoo the birds off sports fields.

But the city’s spokesperson, Clay Adams, said the measures being used don’t seem to be as effective as they were, which has been aggravated this past winter by an estimated 180,000 snow geese calling Richmond its temporary home – up 40 per cent from the previous season and more than double from three years ago.

“Because the geese mainly go on fields at night, our flagging and dog hazing strategies are becoming less efficient than in the past,” explained Adams.

“We are also seeing geese on fields further east in Richmond that have not been hit in previous years, likely due to their increased numbers.

“Having said that, I am told we have generally seen fewer complaints over the past year, likely due to reduced use of sports fields because of COVID-19 and the geese generally landing at night when people don’t tend to see them.”

Adams understands that the geese are now generally spending the day on the Grauer Lands (on the West Dyke) and then fly inland at night to feed.

“We have noticed an increase in damage to fields over the past couple of weeks,” he said, adding that Hugh Boyd fields are the focus for some complaints right now, “likely due to their high use by soccer clubs.”

Adams said it’s difficult at the moment to quantify the cost to the city, in terms of repairs to the fields, noting that the snow geese will be heading back to the likes of Siberia very soon for the summer.

“Boyd Oval (grass) has been one of the nicest grass fields in the Lower Mainland, but also a paradise for snow geese retreats,” Roevde told the News.

“At times, (there is) so much goose poop on the field that you can even see the layer of poop from the road while driving past.

“I have had great communication with Gregg Wheeler from the city on this topic, and we both understand that we kind of have to wait them out to leave.”