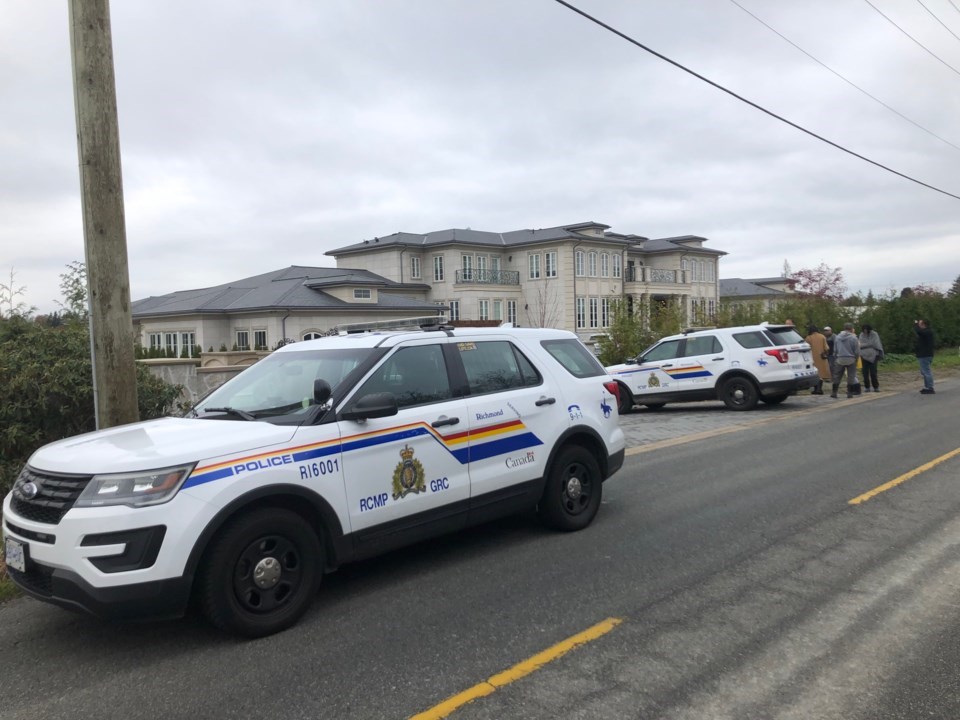 Six police SUVs raced to the scene of shots being fired at snow geese from this mansion on No. 4 Road at Steveston Highway in Richmond last yearRichmond News file photo

Firearms bylaws were broken and criminal charges have been recommended by the RCMP, after someone started taking pot shots at snow geese from a Richmond mansion late last year.

However, Coun. Michael Wolfe, who called after the incident for a closer look at the bylaws, is still asking Richmond city hall staff to revisit the city’s firearms discharge bylaws for potential modification and editing of the firearms discharge map.

Wolfe said in November, 2020 that he had been “concerned for some time that the current rules may be out of date, given the proliferation of residential areas in relation to agricultural land, where hunting is allowed, with the correct permits.”

Before Wolfe’s request for staff to review the bylaws was approved, the city’s community safety committee heard how the discharge of the gun at the mansion on No. 4 Road and Steveston Highway did breach the city’s rule of being inside 135 metres of both a highway and a “dwelling house.”

“This is a violation of the Firearm Discharge Bylaw and the City has the option of pursuing this as a bylaw prosecution in Provincial Court,” wrote Carli Williams, manager of Business Licence and Bylaws, in a memo to city council.

“As of the date of this memo, the RCMP has recommended to Crown Counsel that the individual be charged with three offences under the Criminal Code.

“While the City could proceed in parallel with a bylaw prosecution, proceeding with the higher order (criminal) charges is preferred in most cases.”

A bylaw prosecution trial, added Williams, could “undermine, or at least complicate, the criminal proceeding for the same offence.”

Williams added that the city has six months from the date of the bylaw violation to decide whether to proceed with a bylaw prosecution.

“Staff are monitoring closely and working with the RCMP on this file. It is staffs intention that in the event that Crown Counsel does not proceed with the recommended criminal charges within that six month period, then the City will proceed with a bylaw prosecution.”

At the time of the incident, which attracted a large police presence, Richmond RCMP said that, while this residence was within a zone where hunting is permitted, “numerous hunting violations were observed.”

They seized a number of firearms for alleged firearms violations, including careless storage.

Wolfe said last year that he was cognizant of the fact that the use of firearms is necessary on farmland.

These are the highest-valued properties in Richmond
Jan 6, 2021 6:20 PM
Comments