The Richmond News looks back on a crazy week of news in the city, as word of the "coronavirus" in China began to sweep across the Pacific Ocean
Jan 24, 2021 9:00 AM By: Alan Campbell 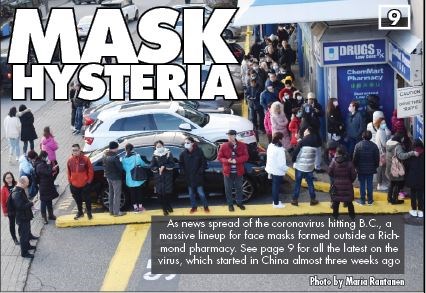 A year ago this week, the Richmond News captured this image of people lining up down the street because they'd heard of a new shipment of facemasks arriving at a pharmacyRichmond News screenshot

It’s hard to believe it has been almost a year to the day that we witnessed scenes in Richmond that, at the time, beggared belief.

While working away at their desks on the second floor of their Ackroyd Road office, Richmond News staff were distracted by a growing buzz of activity outside.

After stepping out onto their balcony, they were taken aback by a massive line-up snaking its way for more than 100 yards west along Ackroyd, which was getting bigger by the second.

Richmond’s predominantly ethnic Asian community – more tuned into the growing spectre of coronavirus (as it was called then) in China than many – had heard of a new supply of face masks arriving at the ChemMart Pharmacy on Ackroyd, opposite PriceSmart and next door to the Richmond News’ office.

This was all, of course, pre-pandemic.

In the same issue, the News reported how “since the deadly, flu-like novel coronavirus surfaced in Wuhan, China, almost three weeks ago, 132 people have died and more than 6,000 have been infected.

“Three people have been confirmed as having the virus in Canada — two in Toronto and one in B.C.

“The Chinese government has cut off access to Wuhan and 16 other cities and some airlines have halted all flights to China as a result of the outbreak. The Canadian government is advising against all travel to China.”

Indeed, in the last week of January, 2020, the first case in B.C. came through YVR, a man in his 40s from, who arrived at the airport from China.

Dr. Bonnie Henry said the man visited Wuhan, where the virus originated at a so-called “wet market,” which sold live and illegal animals.

In the same week, health officials denied there was a confirmed case at Richmond Hospital, despite rumours spreading like wildfire on Chinese social media site WeChat.

It’s all a far cry from where are now in B.C., in Canada and, indeed, around the world, where multiple versions of a vaccine are being rolled out and more than two million people are reported to have died from COVID-19-related complications.