The no-kill charity that runs Richmond’s animal shelter is asking for the public’s help after a homeless man’s beloved dog was badly hurt in a car accident.
Sep 18, 2019 8:35 AM By: Alan Campbell 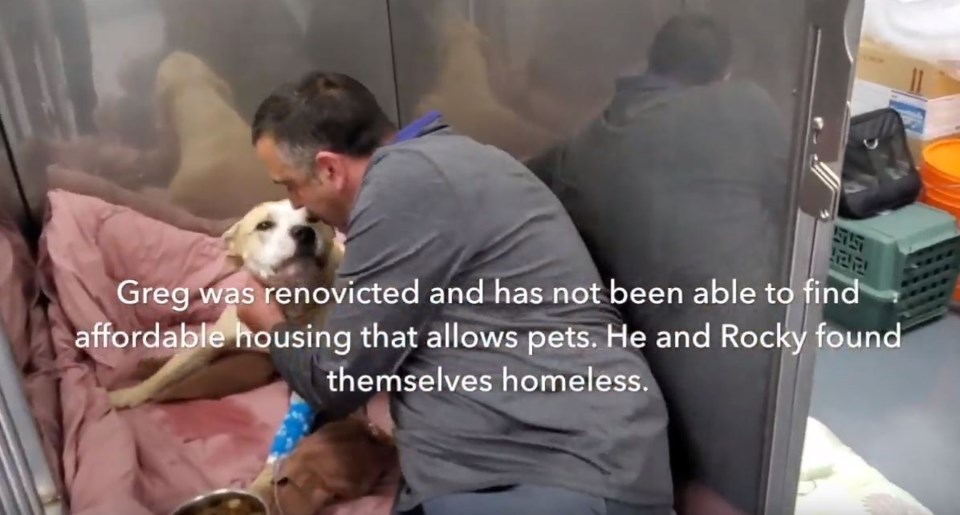 Greg Wright comforts his dog Rocky at RAPS Hospital, after the pair were involved in a rollover accident. Wright is homeless and can't afford to pay for an MRI that Rocky will need. Screenshot

The no-kill charity that runs Richmond’s animal shelter is asking for the public’s help after a homeless man’s beloved dog was badly hurt in a car accident.

The Regional Animal Protection Society (RAPS) stepped in to help Greg Wright, who was involved in a rollover crash just south of the Massey Tunnel last week, along with his dog, an eight-year-old Staffordshire terrier called Rocky.

Wright – a coast guard veteran who suffers from PTSD – escaped with minor injuries, but Rocky sustained broken ribs and other serious injuries.

Rocky remains in the care of RAPS hospital, where he will undergo hyperbaric oxygen therapy, the only one of its kind in Canada for animals.

However, he needs an MRI scan to determine if there is a spinal injury, which costs another $5,000, with his entire medical care possibly running as high as $20,000.

“I had absolutely no money and that was not a concern,” Wright said of the non-profit RAPS taking care of Rocky.

“The concern was the health of my dog. They are absolutely amazing people here.”

Rocky apparently becomes nauseous on curving roads and tried to move from the front of the car to hide in the back seat. But he became stuck.

“I was driving with my left hand, trying to help him so he didn't hurt himself and ended up hitting a telephone pole, shearing it off, and flipping several times into a ditch,” explained Wright, who lives in an RV, but had borrowed a car that day.

Wright told how, to aid his PTSD, he adopted Rocky when the dog was two years old.

“We bonded immediately when he bounced out of the car. Now we've been together six-and-a-half years.”

Just about the time Wright adopted Rocky, the pair were renovicted from their home and he couldn’t find affordable, livable housing that allows pets.

The pair lived in the RV on the Richmond dike for two years before a professional dog walker took pity on them and offered a safe place to park the RV.

Support to help fund Rocky’s ongoing medical care is urgently needed through online donations or by phone at 604-285-7724. Housing opportunities that would welcome both Greg and Rocky can also be directed to the same number.