Olympic racewalker gives some tips on walking, but says the most important thing is to get out the door.
Jul 15, 2021 1:17 PM By: Maria Rantanen 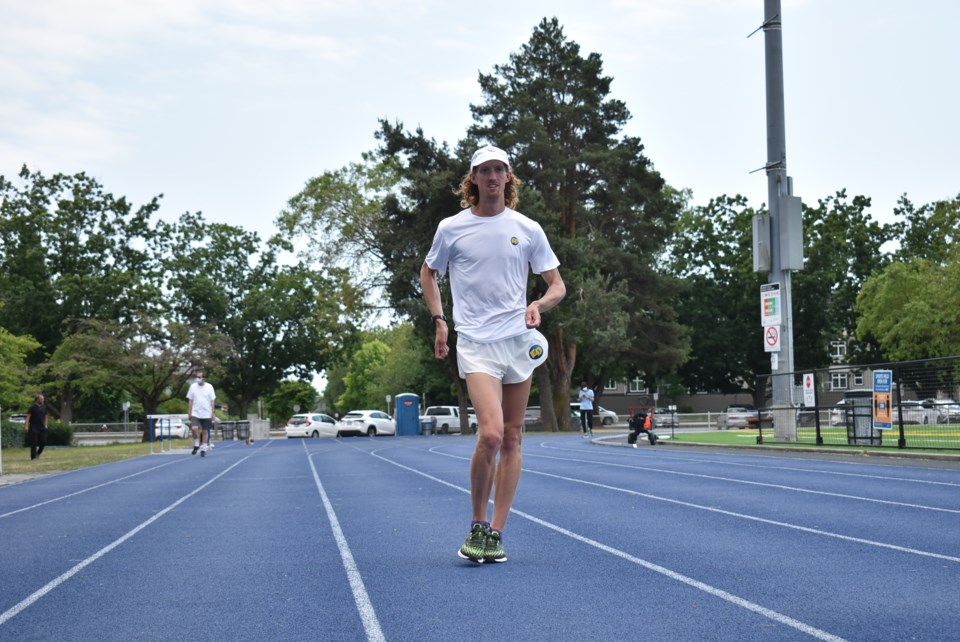 When you walk, do you talk in sentences or paragraphs?

If you are trying to get in shape by walking and can talk in long, flowing paragraphs, you might want to step it up a notch.

But if you need to catch your breath after a sentence or two, you’re probably giving your heart a good workout.

This is the “talk test” advocated by Evan Dunfee, Richmond racewalker who is flying out to Tokyo for the Olympics this week to take a part in the 50-kilometre competition.

“That’s a really good measure for people who don’t know what their heart rate should be,” he told the Richmond News.

Dunfee calls walking “the most accessible exercise” and would like to see many more Richmondites put on their shoes and just get out the door, either for an amble around the neighbourhood or to a set destination.

Walking is that “in between” sport that can give an aerobic workout without the high-impact pounding of running.

He challenges people who say they don’t exercise, but they just walk.

“If walking is all you do, you’re still exercising,” he said. “You can get incredibly fit and you can reach all of your exercise goals through this medium of walking.”

Unlike running with its high impact, walking is great for all ages – the oldest racewalker at the Olympics is a 52-year-old Spanish man who it taking part in his seventh Olympics.

“You’d never see that in running – you’d never see a 52-year-old at the Olympics because your body just breaks down,” Dunfee said.

Competitive racewalking has two rules: one foot must always be on the ground and the front leg must must be straight.

But when walking for exercise, rules don’t matter.

Dunfee has some simple technical tips to walk faster - landing on your heel, rolling to your toe, pushing off with your toe while pumping your arms in rhythm.

“That’s the most basic instructions I’ll give to people who want to get that little bit extra umph,” Dunfee said.

Dunfee came in fourth in racewalking at the 2016 Olympics.

But success at the Tokyo Olympics will be just doing his best in the 50-kilometre race, which is equivalent to 125 laps around the Minoru track.

“How I’ll define my success is standing on that start line and knowing I’ve left no stone unturned - I’m happy, healthy and ready to go,” Dunfee said.

Dunfee is sponsored by Kraft Dinner and he encourages Richmondites to tag him on Twitter and Instagram at #KDRacewalkers and post a photo of themselves walking.