Admittedly, Evan Dunfee was the first to attempt it, but it's got to start somewhere and he almost broke his own Canadian racewalking record
Apr 29, 2021 12:54 PM By: Alan Campbell 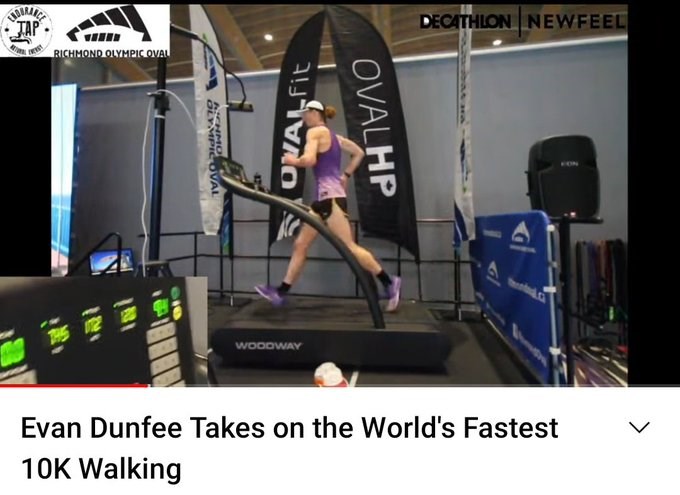 He spent more than five times as long setting up the livestream of his treadmill racewalking world record attempt than he did actually setting it.

But that didn’t take the shine off Richmond Olympic racewalker Evan Dunfee recording the fastest ever 10K across the globe on a treadmill – 39 minutes and two seconds.

Granted, no one has ever tried it before, so the second Dunfee stepped onto the machine outside the Olympic Oval, he was basically guaranteed to set a record.

But someone somewhere around the planet has to kick these things off, so who better than Richmond’s 50K Olympic specialist, who clocked a time just eight seconds slower than his own Canadian record on terra firma.

“It was a lot of fun,” Dunfee told the Richmond News afterwards.

“(But I) spent the night before at the Oval for four hours trying to work out last minute how to do the livestream, so I was fairly stressed and didn’t get home till 11 that night, scarfed down a pizza a got a few hours’ sleep.

“So I was really surprised with how good I felt! Wish I had bumped the pace up a little earlier to sneak under 39 (minutes). But oh well.”

Dunfee, who performed the entire event live last weekend via video link to official racewalking judges, said he was “super thankful” to the Richmond Oval for helping put it together and “seeing the value in this quirky little project.”

The 30-year-old Olympian was using the treadmill stunt as part of his training for the upcoming, delayed Tokyo 2020 Games, where he will target the marathon 50K race.