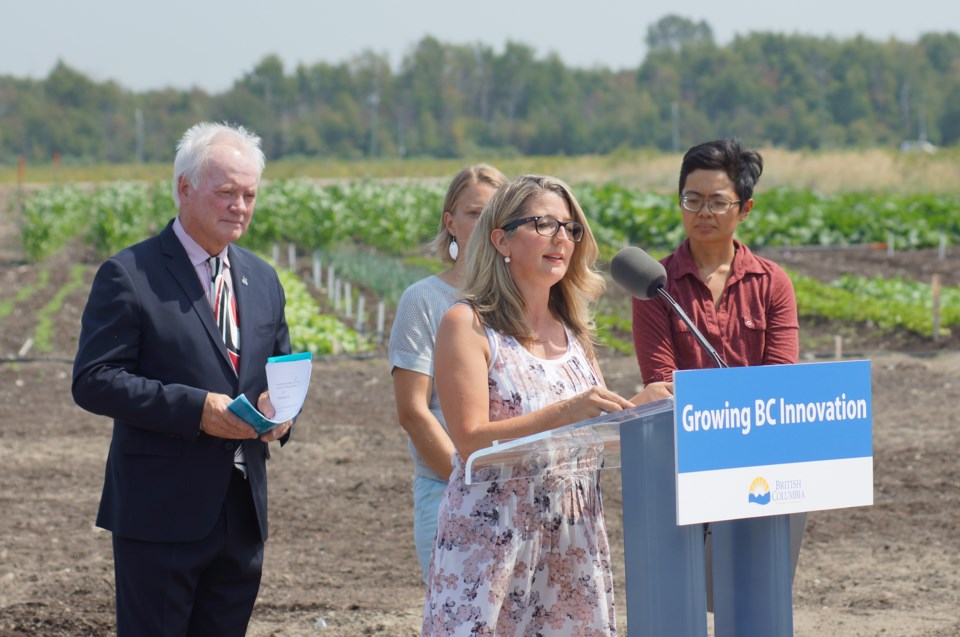 B.C. Minister of Agriculture took to the podium at the Garden City Lands to announce funding for an eight-hectare research farm to be operated by Kwantlen Polytechnic University sustainable agriculture students and scientists. To her left is Alan Davis, president of KPU. The university is leasing the land from the City of Richmond.

B.C.’s Minister of Agriculture was in Richmond this week to announce funding for a new research farm and seed lab at the Garden City Lands park.

The move, according to Lana Popham, is aimed at promoting sustainable, organic urban agriculture in the region.

Popham granted Kwantlen Polytechnic University (KPU) $670,000 to “support the purchase of seed-testing equipment for a newly renovated seed lab, as well as farm infrastructure including irrigation systems, high tunnels, a greenhouse and post-harvest processing facilities,” according to a statement.

In total, $1.68 million has been invested at the farm. The provincial funds (from the B.C. Knowledge Development Fund) are being matched by the federal government’s Canada Foundation for Innovation.

And West Coast Seeds and other local seed companies also helped the research farm to the tune of $335,000.

As operator of the eight-hectare farm on the Garden City Lands (GCL), members of KPU’s Sustainable Agriculture and Food Systems program hope to “give growers, researchers and students the ability to observe new technologies being tested and participate in workshops highlighting research results.”

The eight hectares within GCL are being leased from the City of Richmond, which is in the process of developing the 55-hectare parcel into a natural sphagnum moss bog reserve with public boardwalks, as well as community-oriented urban agriculture and open leisure space.

Harbut said, out of necessity, the farm will explore irrigation efficiencies, as not enough natural water reaches the GCL for farming and the farm will depend on costly municipal water.

Brodie said the GCL, once eyed by past councillors for a trade centre and condos, will benefit the community “while honouring its designation as farmland within the ALR and protecting the site’s important natural ecology.”

Surrounded by condos to the west and south and a new Walmart to the north, Popham said urban agriculture has an increasingly important role to play for local food security, as development puts pressure on the ALR.

Brodie noted the city will host Richmond Farm Fest at the GCL on Saturday, Aug. 11 from 10 a.m. to 3 p.m., featuring a farmers’ market, agricultural displays, entertainment and children’s activities.