Mini Donut ready for a new home in Richmond

Dog who was dumped in a locked suitcase has been cleared for adoption after owner fails to show
Jun 8, 2017 4:30 PM By: Alan Campbell 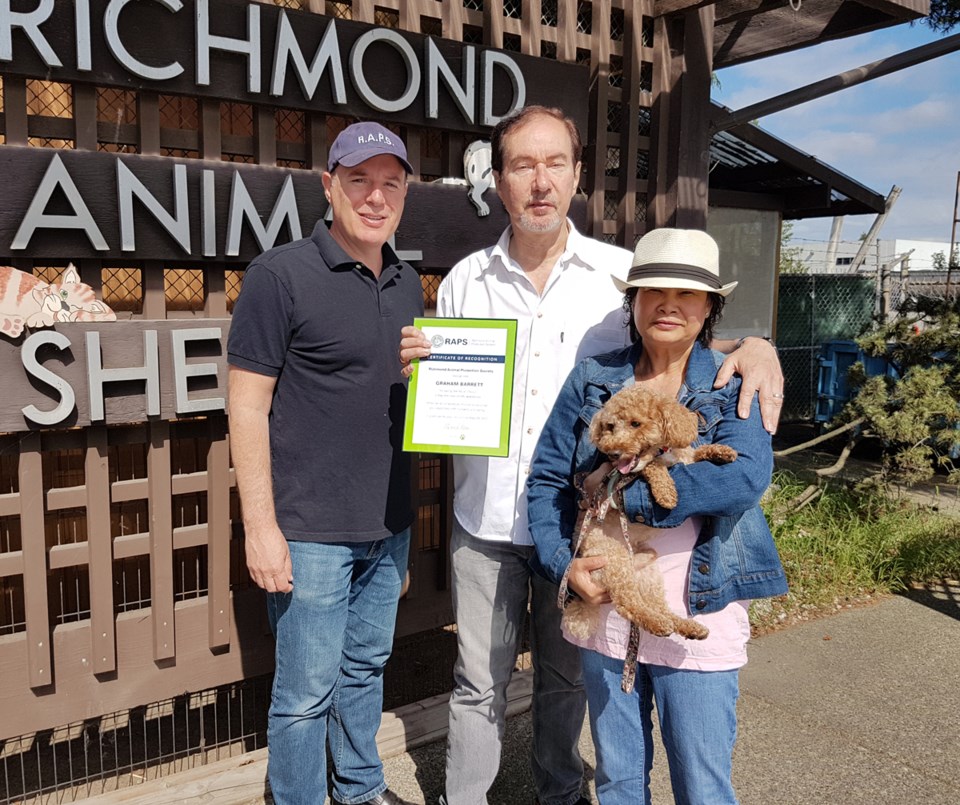 RAPS' CEO Eyal Lichtmann (left) with Graeme Barrett and his wife, holding Donut. Barrett was commended by RAPS for saving toy poodle Donut, who he found dumped in a locked suitcasesubmitted

The little dog found last week locked inside a suitcase and dumped in a ditch could be on his way to a new home.

More than a week after a dog-walker found the toy poodle alive inside the luggage near Walmart, Donut has been cleared for adoption, as no one has come forward to claim him.

There was concern Donut would have to spend several weeks or months languishing at the Richmond Animal Protection Society (RAPS) shelter on No. 5 Road until the BC SPCA investigated the cruel abandonment.

But with the case apparently going cold and Donut, according to RAPS’ CEO Eyal Lichtmann being the “friendliest dog in the world,” the animal charity had no hesitation in putting him up for adoption.

“We don’t want him to be sitting in here for weeks and months,” Lichtmann told the Richmond News on Wednesday.

“By our policy, once a dog has been here for seven days, it becomes the ownership of RAPS and we can put it up for adoption.

“He’s such a nice dog but, understandably, he doesn’t like being in a cage or in a shelter; we want him to get adopted as soon as possible.

“We’re going to start looking through the applications right now; we have a few on file and plenty of interest on social media.”

There had been talk of Donut’s rescuer, Graeme Barrett, taking the loveable pet into his home, but he already has dogs and his strata will only allow two.

Barrett was commended for saving Donut’s life, after hearing weird noises coming from the undergrowth near Walmart at May and Alexandra roads, while he walked his dogs in the baking hot Sunday afternoon of May 28.

Unable to open the case at the scene, Barrett gently wheeled the container back to his house nearby, before opening it in his garage with the help of the Richmond RCMP.

Out popped a very hungry and urine-soaked Donut, who had no identification and got his new name from staff at RAPS.

RAPS did, however, present Barrett a framed certificate as a thank-you, as well as a $500 coupon for RAPS’ veterinary service.