Rick Hansen has a call to action for businesses and other organizations in Richmond: set the bar higher and make your businesses accessible to people with disabilities.
May 2, 2019 5:00 PM By: Maria Rantanen 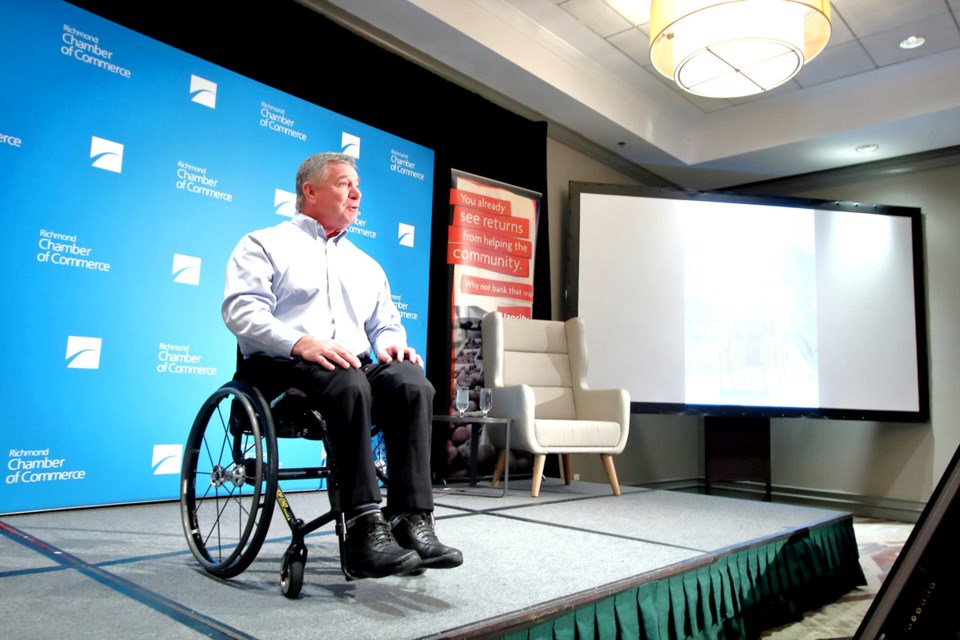 Rick Hansen spoke to the Richmond Chamber of Commerce on Tuesday about making businesses accessible.Photo submitted

Rick Hansen has a call to action for businesses and other organizations in Richmond: set the bar higher and make your businesses accessible to people with disabilities.

Not only is it a human rights issue, it’s a “tremendous economic opportunity” Hansen told the Richmond News.

“At the end of the day, the call to action isn’t just for business,” he said. “It’s for everyone, the public, private and social sector to have Richmond be the first city to be completely rated and measured on a universal standard.”

Hansen said he’s impressed with the participation of the City of Richmond in the ratings and certification process, developed by the Rick Hansen Foundation with help from a startup grant from the province.

So far, 48 Richmond facilities, ranging from residential to municipal to businesses, have been rated according to these universal standards on accessibility.

“Those ratings are really important because they give visibility to owners, their employees and their customers of how accessible they are and they’re recognized and certified for meeting the minimum standard,” Hansen said.

“And they’re being actively spotlighted when they’ve gone beyond minimum to a gold level of accessibility.”

The rating and certification system is modelled on the global LEED certification process that is currently used to certify energy-efficient building systems.

One of the most common barriers people with disabilities face is accessibility to buildings, and this is particularly challenging with smaller businesses, Hansen said.

Accessibility to employment is another area that needs to be addressed, and Hansen pointed out half a million people across Canada with disabilities could help alleviate the current labour shortage.

One in five Canadians has a disability, Hansen said, and they are not all in wheelchairs.

“Those myths have to be broken down and replaced with facts,” he said.

For information on the rating and certification program, go to rickhansen.com.