The Richmond owner of a crashed $200,000, James Bond-style sports car - who tried to sue a dealership and auto body shop - has been ordered to pay almost double the original cost of her wrecked vehicle.
Sep 14, 2020 5:01 PM By: Alan Campbell 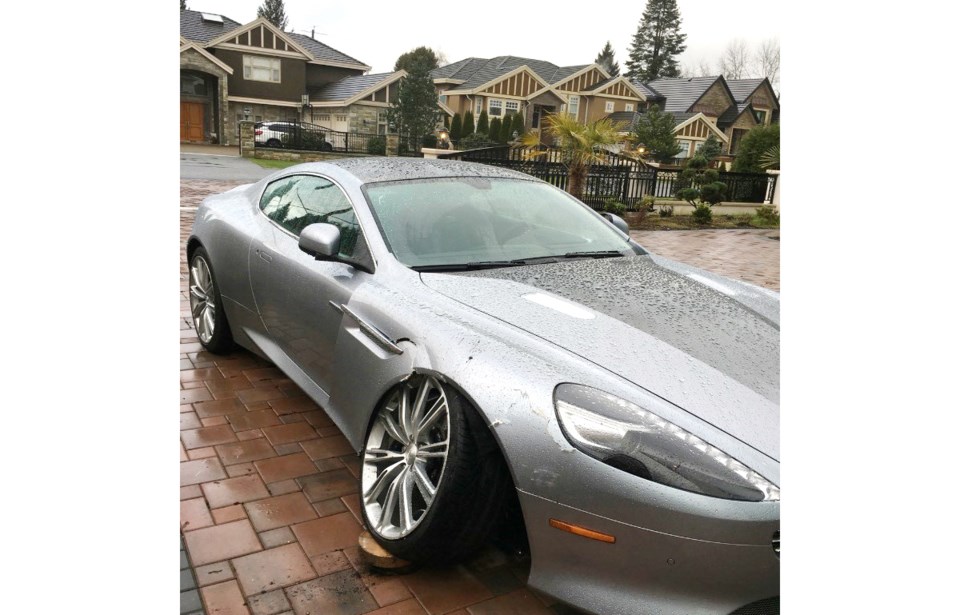 Jessica Liu’s 2014 Aston Martin DB9, with its Skyfall silver paintjob, sits inoperable in the driveway of her home near Blundell and No. 2 roads in December of 2015. Liu claims she’s being overcharged by the autoshop that specializes in fixing Aston Martins.submitted

The Richmond owner of a crashed $200,000, James Bond-style sports car - who tried to sue a dealership and auto body shop - has been ordered to pay almost double the original cost of her wrecked vehicle.

The Richmond News reported in 2017 how resident Jessica Liu lost control of her silver, 2014 DB9 Century Skyfall Aston Martin and collided with a rock in December 2015, while driving near her home close to Blundell and No. 2 roads.

Liu hasn’t had possession of the collector’s item – which is named after Bond movie Skyfall – since the accident and embarked on a three-year legal wrangle.

She only had basic insurance and subsequently refused to pay the repair bill – which ranged between $85,000 and $135,000 – claiming in a law suit launched in 2018 that she had been taken advantage of, due to her lack of English skills and perception of wealth, and that there was a breach of contract and collusion between the two defendants, Vancouver-based dealership (MCL Motor Cars) and auto shop (Burrard Autostrasse).

Liu used – and then dispensed of – four different law firms before eventually representing herself and asking the court to award her personal “pain and suffering” damages worth $300,000, as well as a brand new Aston Martin.

However, in a decision released last Friday at the BC Supreme Court, Madam Justice Nitya Iyer dismissed Liu’s claim and, instead, ruled in favour of a counterclaim lodged by Burrard Autostrasse which, along with the dealership, had vehemently denied all of Liu’s allegations.

Iyer also ordered the Aston Martin owner to pay some of Burrard’s legal costs, although it’s not clear how much that amounts to over the years.

The News reported in January 2017 how, after driving the lightly-used Aston Martin for only a few kilometres, Liu inexplicably veered off the road and hit a large stone near Blundell and Garden City roads in December 2015.

To put things into perspective, a pot of the car’s silver paint was priced back then at $900 and a single headlight registered at $7,000.