A former WestJet flight attendant returned to Vancouver International Airport on Friday, after previously being asked to leave during her campaign to raise awareness about sexual harassment in the airline industry.
Jul 23, 2018 5:26 PM By: Alyse Kotyk 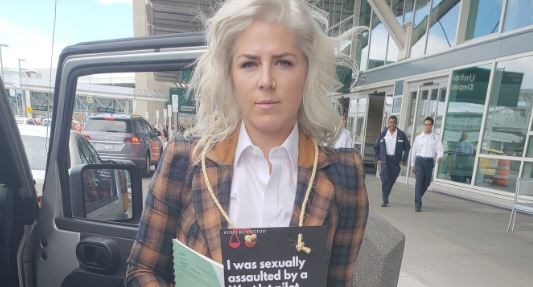 A former WestJet flight attendant returned to Vancouver International Airport on Friday, after previously being asked to leave during her campaign to raise awareness about sexual harassment in the airline industry.

Earlier this month, Mandalena Lewis visited YVR to distribute pamphlets about her campaign #youcrewmetoo, which describes itself as “an online support community for flight crew experiencing sexual harassment at work.” But after approximately two hours, Lewis was asked to leave the airport. She responded by writing a letter to YVR, asking for a way to “exercise (her) expression in this issue at the airport.”

Lewis was in contact with YVR leading up to her next planned visit on July 20. This time, she said nobody from the airport interfered with her demonstration.

“It went really well. We had a lot of different people stopping by. We had guests, passengers, we had YVR employees stop, we had a couple of crews stop,” Lewis told the Richmond News.

“We had people say they didn’t even know it was an issue in the airline industry, which was really troubling and they were troubled by it.”

Lewis says she stayed at the airport – in the same location where previously demonstrated near the international departures gate – for approximately two hours before she ran out of informational business cards to hand out. However, she says this is just the beginning and that public support has been growing.

“I’m going to keep going,” she said. “It’s so wonderful because now I’ve have an ally-ship…we’re going to start brainstorming and getting a little bit more organized together because I’ve been doing this lone wolf style the entire time.

“I’m getting that army base kind of happening.”

Since she began her campaign, Lewis said two women have come forward to share their experiences of sexual harassment with her and that she now hopes she can help women find legal support.

“It’s hard to get legal representation,” Lewis said. “I recognize I’m privileged (to have legal support) and I recognize that women are petrified and rightfully so, they’re petrified, because they face huge backlash.”

Lewis, who is currently involved in a proposed class action lawsuit against former employer WestJet says she told the company she was sexually assaulted by a pilot in 2010 and says the company subsequently failed to protect their female flight attendants.

WestJet appealed to strike the claim, but the appeal was denied late last year. The next appeal is set for January 2019. A WestJet spokesperson told the Richmond News by email that the company would not comment on the matter as it was currently before the courts.