The coronavirus may not have made it to Richmond, so far, but the fear of catching it certainly has. The Richmond News has learned that many pharmacies across the city are either completely sold out of surgical masks or only have a handful left.
Jan 23, 2020 7:00 AM By: Nono Shen & Alan Campbell 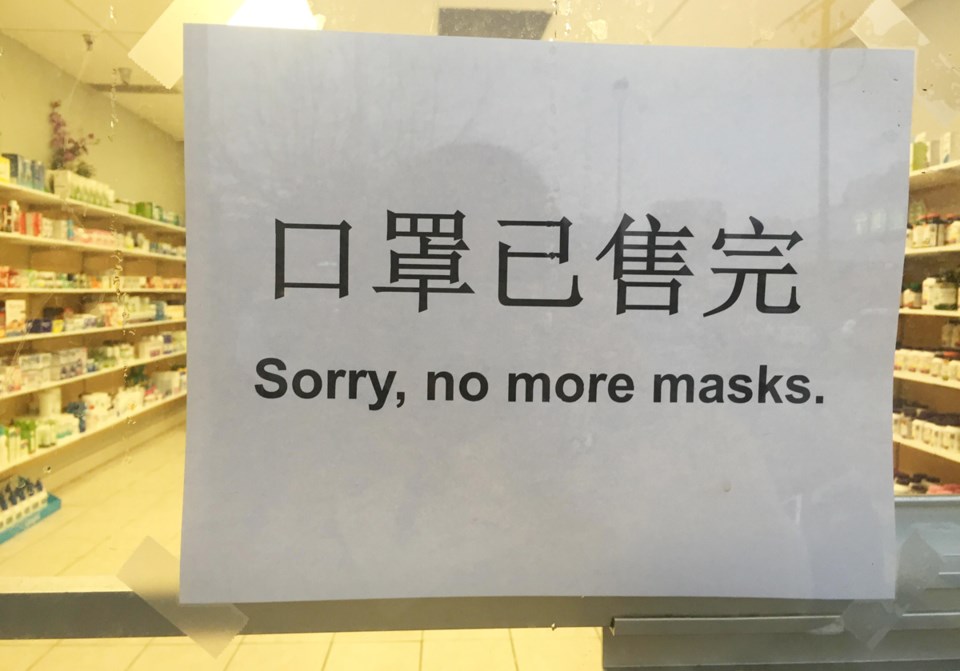 This sign was placed on the window of a pharmacy on Ackroyd Road on Wednesday. Nono Shen photo

The coronavirus may not have made it to Richmond, so far, but the fear of catching it certainly has.

The Richmond News has learned that many pharmacies across the city are either completely sold out of surgical masks or only have a handful left.

According to the pharmacies the News spoke to on Wednesday evening, the amount of masks being sold increased dramatically this week, since news of the Chinese coronavirus outbreak spread across the globe.

Most of the outlets the News talked to confirmed that people were buying the masks because of the virus outbreak and that the high volume of sales was unusual, even for this time of year.

“We sold 80 boxes of masks yesterday within three hours and sold another 40 boxes today (Wednesday),” a pharmacist at PriceSmart on Ackroyd Road told the News.

“We cannot guarantee when we will get them back in stock.”

Indeed, when the News was at PriceSmart’s pharmacy, a reporter overheard customers asking where all the masks had gone.

While a pharmacist at London Drugs at Westminster Highway and No. 3 Road said their masks were also unusually sold out or the same reason.

The Chemmart Pharmacy on Ackroyd Road, next door to the News’ office, was also sold out, with customers stating they were stocking up due to the coronavirus outbreak.

Over at the Continental Pharmacy on Sexsmith Road, behind the Yaohan Centre, there is only a handful of masks remaining in stock.

In fact, the pharmacist told the News she was so busy selling masks that she had to hang up the phone.

The BC Centre for Disease Control (BCCDC) issued a statement Wednesday saying that they are stepping up messaging and screening at airports and that quarantine officers are available at Vancouver Airport to respond to any sick passengers.

The BCCDC said it will investigate any potential cases with Richmond Hospital infection control practitioners.

The News reported Tuesday how the Chinese coronavirus was getting closer to Canada, with a case being confirmed in Washington State.

Health officials in Snohomish County say a man was hospitalized on Sunday and that his diagnosis was confirmed on Monday.

“We have had three people assigned to us from CDC (U.S. Centre for Disease Control) that are here, and that is our priority — to determine what it means to be at risk, who those people are, doing the contact investigation all the way from China to his home here in Snohomish County,” said Scott Lindquist, Washington State epidemiologist.

According to health officials, the man is “doing well,” and is “clinically not ill.”

The coronavirus – which has been traced to a seafood market in the Chinese city of Wuhan - has similar symptoms to the common cold or flu, but can be deadly.

China confirmed Wednesday that 17 people have died and more than 400 more have been infected by the virus.

Health experts confirmed over the weekend that human-to-human transmissions of a flu-like “coronavirus” – which is similar to the deadly SARS virus - have been found.

The U.S. CDC said Tuesday that the patient recently returned from Wuhan, before the new screening procedures were in place.

The Richmond News reported on Monday how Canadian officials at three airports, including Vancouver, added an extra screening question and signage in a bid to keeping a watch on the spread of the coronavirus from China.

U.S. authorities said last week they would start screening at three airports — New York City's JFK, San Francisco International and LAX — for symptoms in travellers arriving via direct or connecting flights from the Chinese city of Wuhan, where the virus is believed to have started.

Although there are no direct flights from Wuhan to Canada, thousands of passengers are expected to be travelling on the 52 flights a week between China and Vancouver Airport, in the run up the Lunar New Year on Saturday.