The City of Richmond is hoping to offer 200 plots to gardeners on the Garden City Lands this summer.
Mar 20, 2021 4:09 PM By: Kirsten Clarke 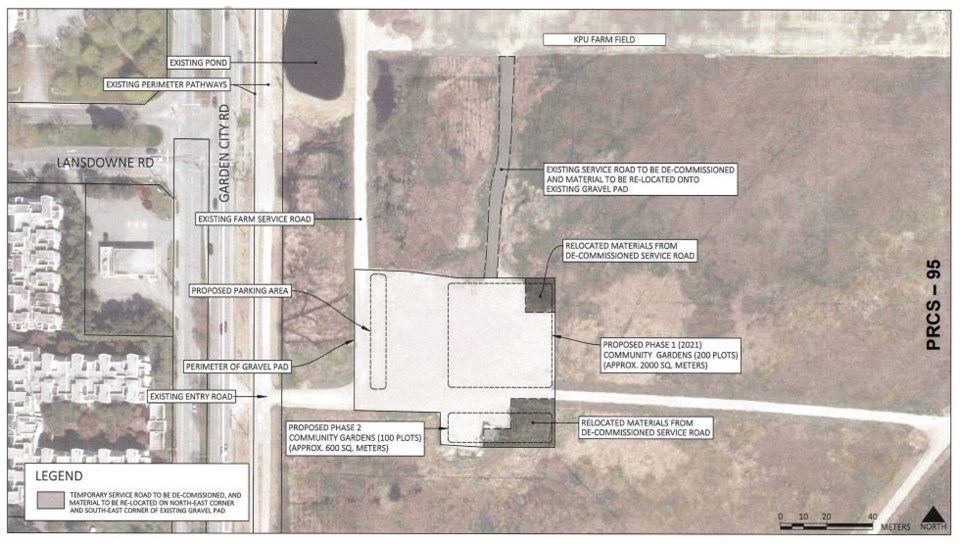 The City of Richmond is hoping to offer 200 plots to gardeners on the Garden City Lands this summer.

The garden plots would take pressure off waitlists for other community gardens around the city and allow residents who don’t have their own space to grow food.

If approved by council and the Agricultural Land Commission (ALC), the garden would be built on an existing gravel area near Garden City and Lansdowne roads for the time being, with a permanent location elsewhere on the property later.

Five hundred cubic metres of agriculturally viable soil would need to be brought in to fill the above-ground, self-contained plots.

The plots would be divided into groups of 50, enclosed by a one-metre tall fence with entry gates.

As the 100-acre Garden City Lands are located in the Agricultural Land Reserve, the city must apply to the ALC for a non-farm use permit, public access and limited on-site parking for community garden members.

According to the city staff report, the project would have no impact on existing trees in the area and is not located in an environmentally sensitive or riparian management area.

If approved, construction of the garden would begin this summer and it would be managed by the non-profit Richmond Food Security Society.

Another 100 plots could be added to the community garden in the future.

The community gardens would be at this temporary location until a permanent, in-ground location is ready.

This permanent move, however, depends on the outcome of a soil management and remediation study that will be done on the lands over the next two to three years.

The cost to build the garden would be covered through previously approved capital budgets.

Gardeners would pay an annual membership fee to use a plot. These funds would be used to manage the gardens, pay staff wages and cover liability insurance on behalf of the gardeners and for supplies such as tools and hoses.

Only approved community garden members would be allowed to access the enclosed gardens with signage to restrict public access.

The community gardens are on the agenda for next week’s parks, recreation and community services committee meeting.