The only open house in Richmond to review documents for an environmental assessment of a planned $3.5 billion bridge to replace the George Massey Tunnel took place Tuesday afternoon at a local hotel.
Sep 16, 2016 2:41 PM By: Graeme Wood 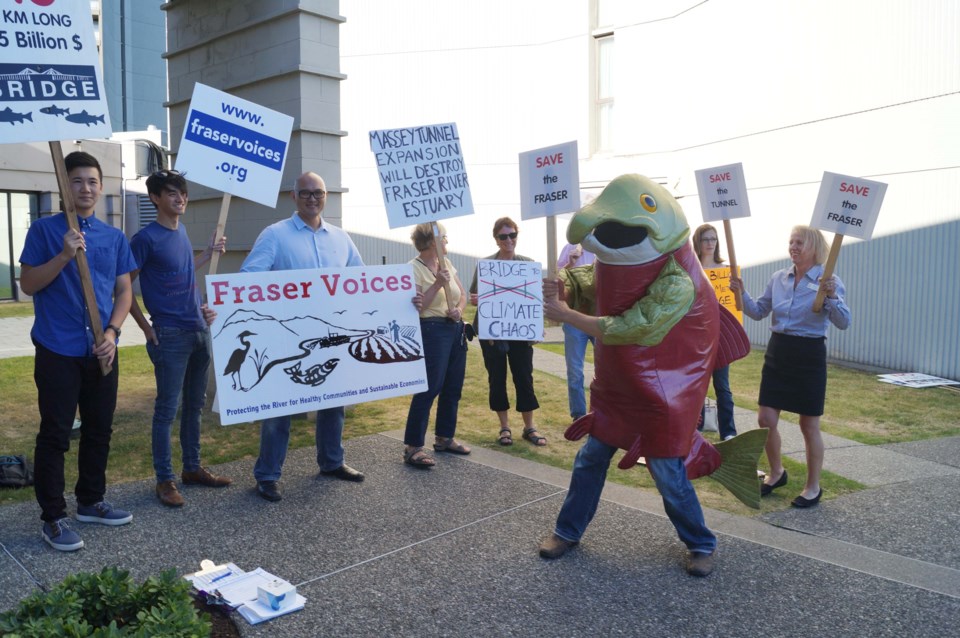 About one dozen members of Fraser Voices turned out to protest at the only Richmond-based BC EAO public open house for the George Massey Tunnel Replacement Bridge Sept. 13, 2016.

The only open house in Richmond to review documents for an environmental assessment of a planned $3.5 billion bridge to replace the George Massey Tunnel took place Tuesday afternoon at a local hotel.

Outside the relatively sparsely attended meeting — hosted by provincial government transportation planners and members of the B.C. Environmental Assessment Office (EAO) — was Fraser Voices, a small group of protesters.

Richmond resident John Terborg spoke for the dozen or so activists.

“Most definitely this project should be completely scrapped, but we’re not opposed to an improved crossing. We think it’s absolutely needed and it’s a priority...We’re for what’s already been announced, which is improved transit through the tunnel, such as rapid bus service out from White Rock, which would immediately assist any congestion...We are in support of light-rail service that would connect the Fraser Valley,” he said.

What residents will get instead, or at least what is nearly guaranteed, is a 10-lane bridge, including two lanes dedicated to buses, and a free-flowing Steveston Highway interchange.

They may voice their opinions at EAO.gov.bc.ca until Oct. 3 (click here).

Fraser Voices notes the EAO review does not include federal entities, such as the Department of Fisheries and Oceans. Nor does it look at the “cumulative effects” of the new bridge, contends Terborg.

“To say that this bridge is not designed for industrial expansion of the Fraser River and the subsequent dredging of the river . . . and this doesn’t trigger a fisheries review? That is ridiculous. We need a full, federal panel review. We need to look at the big picture,” said Terborg, claiming the bridge “encourages a car culture that will be imposed on future generations.”

Day said the B.C. Supreme Court has already stated the EAO process, although legal, is “flawed.”

“Do I have confidence in this process? No,” said Day.

Kelly Greene, of Richmond Schools United, a group of parents opposed to school closures, said the province’s insistence that a bridge is needed due to seismic safety considerations is hypocritical, considering the government has failed to upgrade unsafe schools.

Inside, at the open house, another tale was told.

Geoff Freer, executive project director, said regional growth of one million residents by 2040 means the bridge needs to be built.

He said the bridge is in line with regional growth and transportation plans, despite Mayor Malcolm Brodie stating otherwise.

Addressing concerns from the City of Richmond, Freer said industrial and commercial traffic can bypass No. 5 Road and Steveston Highway with a dedicated on and off ramp for Rice Mill Road.

Freer said there are no plans to dredge the river deeper.

As for the tunnel’s planned removal (thought to facilitate deeper dredging, as requested by Port of Vancouver), Freer said it needs to be removed for fear that a major earthquake could cause it to protrude from the river, or impact the dyke.

Freer said a bridge was chosen over a new tunnel because it far exceeds seismic standards.

He also said the bridge falls in line with the Transport 2021 strategy, drafted in 1993.

The strategy called on governments to “resist urban sprawl” and “restrain the solo driver by supplying little or no additional capacity for this mode except in areas of rapid growth.”

“On the Massey Tunnel...the counter-flow lane may prove operationally unsatisfactory over an extended period and may require new solutions.”